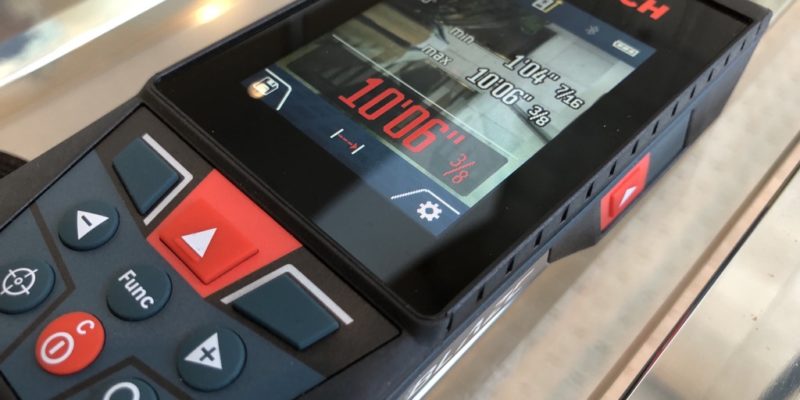 This post is sponsored by The Home Depot. We’ve been fans of Bosch laser distance measuring devices since they first started coming on the market several years ago. Comparing the laser measuring tools of today to those from four years ago is a bit like comparing televisions from the 1970’s to today’s flat screens. Early laser measures had small, monochrome, hard-to-read displays that were not backlit. Those limitations meant that if you were using your laser measure in anything but ideal positioning and lighting, reading those measurements could be frustrating at best. Recently, team blue released the Bosch GLM400C Interior and Exterior Laser, and it’s the jumbo flat screen of the laser measure world. Does this big screen, long distance laser distance measure deserve a spot in your tool box?

We recently reviewed the Bosch GLM50C Laser, and that little sibling shares a lot of features and functionality with the GLM400C that Bosch sent our way for this review. Basic operations are very similar, so if you want a detailed rundown on features and functionality, check out the GLM50C review. In this article, we’ll be focused on the features that set the Bosch GLM400C apart from smaller Laser Distance Measuring (LDM) devices on the market.

That’s German for “It is very Big.” The Bosch GLM400C is about the size of a typical smartphone, and about two times as thick. This is not your usual laser measure – it’s big! I showed up with this thing at a home inspection recently, and the contractor that was there immediately asked if bigger is better when it comes to lasers. While it’s not pocket-sized, there are some key advantages to this less portable form factor. For starters, the size translates to bigger buttons and, more importantly, a much larger screen than you’ve probably ever seen on a laser measure.

One very common frustration of using a laser measure over any significant distance, especially outdoors, is that it is very easy to lose sight of that pesky little laser dot. Sometimes, when I’m doing a longer measurement outdoors, I start with the laser pointed by my feet and then I try to track it visually as I slowly move the dot further from me and closer to the target. Sometimes that works, other times I wind up losing the dot after 10 feet. Tracking a little laser point on a bright day outdoors is even more challenging.

Thanks to an amazing digital viewfinder on the Bosch GLM400C, tracking the dot visually is a whole lot easier. In fact, you can actually accurately pinpoint what your targeting, even when you can’t see the dot at all. The viewfinder will help keep your dot in sight longer, and then let’s you know where it is even when you can’t see it, thanks to a little red digital crosshair in the center of the viewfinder.

No, this is not an old ad for Mazda vehicles. The triple zoom here is controlled by the single button with a magnifying glass on it. Each press of the button zooms the viewfinder in closer to the laser’s target. A fourth press of the button and it returns to fully zoomed out. This is immensely useful, especially given the insanely long distances you can take measurements over. When you’re measuring something 200-400′ feet away, chances are your naked eyes have no hope of seeing the laser dot, let alone determining exactly where it’s focused. With the zoom, you can see exactly what you’re targeting even at long distances.

Many of the early laser measures maxed out at 30-50′. The GLM400C, as you might guess from the model number, is designed to measure at up to 400′ distances. If you’re dealing with taking measurements of residential properties, this range is likely far more than you need on most jobs. I went to a 1-2 acre property just to try to get a measurement close to the maximum. Even on a lot that size, I wound up shooting the laser off the property to a neighboring building or fence to get measurements in the 200-300’+.

The Bosch GLM400C not only made those measurements, but thanks to the viewfinder and zoom functions, I could tell what distance I was actually measuring. When distance started to get in the 300-400′ range, the tool was sometimes slower to pick up the measurement. If you’re covering long distances and accuracy is key, mounting the laser to a tripod is recommended. It’s hard to hold the laser steady enough to really lock in a long distance dedication by hand. Imagine how long this 300’+ measurement would take with a measuring wheel – with the Bosch GLM400C, it’s nearly instant!

The Bosch GLM400C features a power and measurement button on the main control panel of the tool, as you would expect. However, it also has a handy side button that can both power up the tool and trigger measurement. Given that the tool is iPhone-sized, the side button actually is a very handy feature. It’s versatile enough that you can press it easily with your index finger when holding it in your left hand, or your thumb when holding it in your right hand.

Other Details Of the Bosch GLM400C

Like the Bosch GLM50C, you can set whether the unit measures from the front of the housing, the rear of the housing, or the tripod mount. The Bosch GLM400C also adds a fourth setting which is from the pin, which flips out of the rear corner like a switchblade whenever you’re ready to measure from an inside corner (the corner pin is much less menacing than a switchblade). The tool is smart enough to automatically switch to the pin measurement mode as soon as you deploy the pin. Then, when you stow the pin away, the unit goes back to the default measurement mode, which is from the rear of the housing.

One minor gripe we had about the GLM50C laser we reviewed previously, was that the battery cover latch was a little flimsy. Your barely had to touch the cover and it would pop right off. On the GLM400C (which operates on 3AA batteries by the way), a twist out metal tab securely locks and unlocks the battery cover. While this system feels more solid and secure than the GLM50C, you have to deploy the flip out corner measurement pin in order to open the compartment. So, the cover on this one is more secure, but also a bit cumbersome to open.

Should You Run Out and Buy This Laser?

At over $200, the Bosch GLM400C is not an entry-level laser. It’s definitely designed more for professionals. If your usual usage for a laser measure is to determine room size in a home that isn’t the Palace of Versailles, then the GLM400C would likely be overkill for you. However, if your work has you measuring long distances indoors and outside, and you’re often frustrated with trying to figure out where that little red dot went and what you’re actually measuring, the Bosch GLM400C has some incredibly useful features. The viewfinder and zoom functionality are outstanding for long distance measurements. The downside to that great long distance capability and functionality, is this is not a tool you’re likely to slide into your front or back pocket. I suppose you can, but it’s going to be uncomfortable. But hey, it comes with a belt clip holster which is the next best thing to being a hi-tech Western gunslinger on the jobsite. Regardless of size, the tool sure beats running around with a measuring tape or measuring wheel!