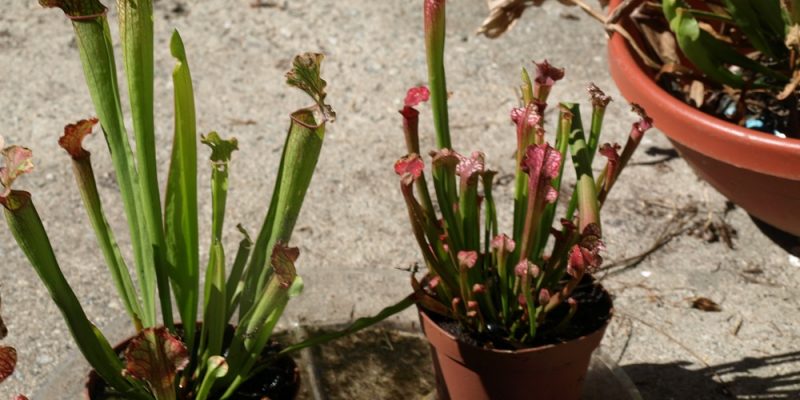 Anyone who regularly reads my gardening articles will be perfectly aware of just how much I love carnivorous plants. These useful plants eat pesky garden bugs, lurk menacingly in brightly lit corners of the yard, and are just as eye catching as geraniums. Some even sing, dance, and eat the neighbors. Or maybe that’s just Audrey II. Skipping over the fact that I’ve clearly listened to the Little Shop of Horrors soundtrack one too many times, let’s get to the meat of today’s subject.

The truth is that most carnivorous plants are fairly low maintenance. These plants generally don’t require blood sacrifices to keep them alive. In fact, they actually dislike hamburger and would much rather feed themselves than have you attempt it. Avoiding fertilizer and tap water are equally good ideas. Distilled or rainwater is what carnivorous plants prefer. If you keep those things in mind, there’s no reason why your carnivores shouldn’t flourish.

But what happens when those thriving plants need more potting soil? They can’t have any fertilizer, remember. So all the Miracle Grow products that are being sold at the local garden centers are definitely out of the question because they’re usually laced with it. This becomes an even bigger pain in the neck because there are barely any soil options left after those have been eliminated. However, I’ve gone to every single garden center in a fifty to sixty mile radius looking for pre-made carnivorous plant (CP) soil only to come up empty handed.

It seems that internet retailers are currently the only source of ready-made CP mixes. The costs look fine in theory but skyrocket to $10 to $20 for a quart bag when the shipping charges are added in. That amount is barely enough to repot two small plants with a bit left over. It’s certainly not an economical choice to begin with, much less when you’re confronted with a huge plant that needs to be repotted.

What To Do When Your Carnivorous Plants Need to be Repotted

I’ve done a lot of research on the subject and most sources say the same thing. Peat moss is the main ingredient in CP mixes. Fortunately, it’s not very hard to find. You just have to cope with the fact it doesn’t come in small amounts. So I got a large quantity at Ace Hardware for about $13. I also got dried sphagnum moss for $3 a bag at one of the other garden chains in town, which would probably do alright in a pinch if you shredded it first.

The real headache is dealing with the vermiculite/sand question. You need one or the other to lighten the soil and improve drainage. However, there isn’t any place in the surrounding area that sells anything other than Miracle Grow brand vermiculite. So no dice, right. That leaves sand. Apparently the pros are incredibly specific on the subject. Gardeners are supposed to use pure silica sand that measures between a grade #12 and a grade #14 in diameter. In pictures, this substance looks a lot like a coarser version of the stuff you would see at the beach. However, the sand in question also cannot come from a beach environment because that would make it too salty.

The trouble was that I couldn’t find precisely what the pros suggested anywhere online, and importing sand was just as expensive as using the premade soil mixes anyway. I briefly considered using the ground up glass that one garden center was selling as a top dressing for plants. Yes, glass is silica but I was worried about the possible presence of other chemicals. Carnivorous plants don’t like those at all.

I have used triple-washed playground sand from Ace ($5 for a large bag that lasted me several years) on the carnivorous plants with reasonably good results. However, a lot of the articles I read while doing prep work insisted that using playground sand was all kinds of bad for my plants. So I decided to go with the rocks/gravel option instead. Only when I got to the store I ended up having the choice of either the odd reddish rocks in the pictures or a bag of coarse beach sand so I opted for the lesser of the two evils. This is why I only potted the two youngest plants at first. If something goes wrong, at least my prized 4 and 5 year old flowering specimens won’t be damaged.

To repot the plants, I rinsed the new containers I would be using with ordinary water to get off any old potting soil from previous projects. Then I wiped the containers completely dry with paper towels so that nothing harmful would inadvertently be left behind. Next I measured out a roughly even amount of peat moss and gravel with a little shredded sphagnum thrown in for good measure. I soaked all this with distilled water and mixed it together in the dish I usually use to hold the water for the carnivorous plant bog.

Using this mixture, I plotted the CPs up as I would any other plant. I also washed my hands with soap immediately thereafter. If the peat moss is left on your hands for very long, it can cause allergic reactions. In my case, my palms turn bright pink and feel slightly sunburnt for days. I finally top dressed them with the long strands of sphagnum and doused both with more distilled water. We shall see how things evolve.

If it had rained here more recently, I would have left the gravel in a bucket filled with rainwater and let them soak for a few days to remove any excess minerals that might be present. I would have also used colorless rocks if I could get my hands on them but my only other option was apparently using playground sand. Next time, I’ll probably go for the sand. If the plants start deteriorating as a result of the experiment, I’ll probably switch them over to pots with peat moss and playground sand. No matter what the pros think, I know from experience that mix does work.

Have you ever made your own CP soil? If so, how well did it work? Tell us about it in the comment section below because we’d love to hear your ideas on the subject.