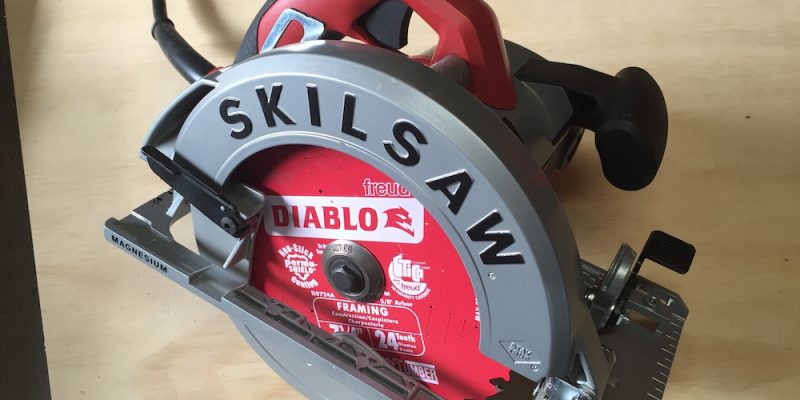 Most people call facial tissue “Kleenex.” Most carpenters call a circular saw a “Skilsaw.” Why? Because they were the first products of their kind. Coincidentally, both the Kleenex tissue and the first Skilsaw model E were introduced in the same year: 1924. Both products became ubiquitous in the 20th century, and still dominate their industries. And, most importantly, it is just a lot easier to say “Kleenex” or “Skilsaw” than “facial tissue” or “circular saw.”

Skilsaws were the go-to pro-grade jobsite saws when I was coming up in the trades. The Skil “wormdrive” saws were, and still are legendary for their power, accuracy and durability. For those who may not know what a wormdrive saw is, they have the motor in line with the blade, and the handle at the back. They are wood ripping beasts, and they are HEAVY. Skil has also long made “sidewinder” saws, that have the motor off to the side of the blade. Sidewinders are much lighter and have more torque than wormdrive saws, but with the lighter weight comes a shorter lifespan, generally.

When Bosch bought Skil in the 90’s, they moved most of their sidewinder saws into the weekend warrior market, cheapening them up a good bit, and I, like most pros, switched brands. Recently, we here at Homefixated got a new Skil SPT67WM pro-grade sidewinder saw from the manufacturer to review. As someone with a long history with Skil, I was anxious to give it the once over to see if the new saw truly is pro-grade, or more of the recent trend toward “pro-sumer” power tools.

The big selling point of this saw is the all-magnesium motor housing, foot and blade guard. On their website, Skil calls this their “All Magnesium Saw,” which is a little weird, since the grips are still plastic. That concerns me a bit, since that point where the grip meets the motor housing is where circular saws often break when they get dropped, which happens from time to time on a jobsite, no matter how careful you are. Saws I have owned more recently that have a one piece resin housing and grip don’t have that issue. However, the new Skilsaw is amazingly light for its size…much lighter that my other resin body circular saw.

Bringing out a new corded saw in a time when so many are going cordless is a gutsy move on Skil’s part. Framers are the folks who need the power and consistency that you can only get with a full-sized 7 ¼” corded saw, and the new Sidewinder has a lot of nice, solid features that framers will like. It’s got a 2” cutting depth at 90º, a 15 amp, dual-field motor to keep the saw cool under heavy use, and a blade wrench that stays put in a slot in the foot. It has a 10 foot long, heavy-duty rubber cord. It has a lot of torque and very fast cutting speed. I Especially like the nifty angle adjustment that goes to 45º, then with the push of a button rolls all the way over to 56º, which comes in handy occasionally.

Another nice addition to the new Skilsaw package is that it comes equipped with an excellent Freud “Diablo” framing blade. These blades really are top of the line, with a 24 tooth, thin kerf design and a red “Perma-shield” coating that reduces sticking and pitch build-up.

All-in-all, I think Skil is making a strong move back into the pro sidewinder market, and the price (around $100) is reasonable enough to make this a good first power tool purchase for anyone who wants to fill their workshop with quality tools.