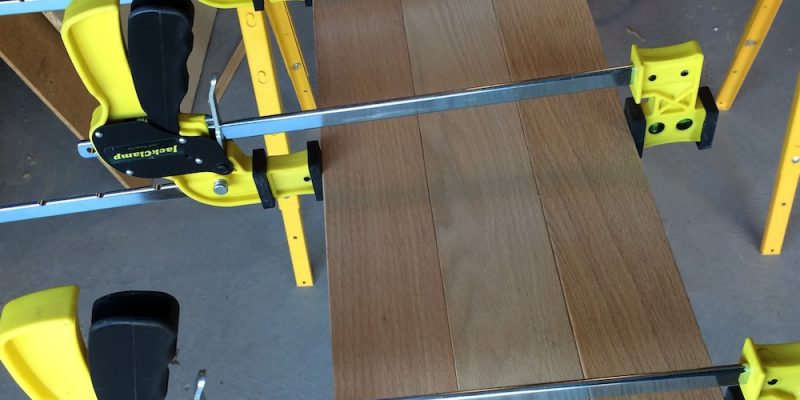 Want to start an epic battle among your woodworking friends? Ask them how they measure clamping pressure when they’re gluing up a project. You’re likely to get a variety of responses, ranging from “don’t clamp it too tight, you’ll get too much squeeze out” to the more common “clamp the living crap out of it!” to “you just have to develop a feel for it.” The latter two methods are likely how the majority of woodworkers do it – including myself (although “woodbutchery” might more accurately describe my interaction with wood).

It’s not easy finding the clamping sweet spot. Too much pressure, or not enough pressure, and you’ll end up with a bond that lasts about as long as a Hollywood marriage. Adding to the problem, many glue manufacturers don’t even provide a recommended pressure to use, even if you DID have a way to measure it.

Under Pressure – But How MUCH Pressure?

A few years back, Fine Woodworking published an article on the amount of pressure required for gluing various wood types. The Fine woodworking article also gave rough estimates of the average pressure various clamps are capable of producing.

During extensive research they undertook on gluing and clamping pressure, the only manufacturer’s reference the folks at Lowell Thomas Tool found was on the Titebond website: For softwoods (pine, poplar): 100-150 psi. For medium density woods (cherry, soft maple): 150-200 psi. For hardwoods (oak, birch): 200-300 psi.

So there’s a target; now how the heck do you achieve it? Unfortunately, the folks at Fine Woodworking concluded that the actual pressure can vary widely, depending on the strength of the person using the clamp. In their testing, one tester consistently applied only about 60% of the average clamp pressure, while the pressure exerted by another tester was about 40% higher than the average.

A Way To Measure Clamping Pressure Is On The Horizon

A few years back, we took a look at the beefy and versatile Jack Clamp. Made in the U.S.A. by the Lowell Thomas Tool Co., the Jack Clamp has become a go-to tool in the tool chests of many savvy woodworkers and tradespeople. They have also been a long-time Home Fixated supporter and advertiser. Since we last reviewed them, the folks at Lowell Thomas Tool have ratcheted up their efforts to make the Jack Clamp even more useful. Their current quest is to solve that pesky problem that plagues woodworkers: How to accurately measure clamping pressure.

In case you’re not familiar with the Jack Clamp, it’s sort of the Swiss-army-knife version of a pistol-grip clamp. Its unique design makes use of parallel bars, which make it super strong and rigid, with no drop-off in clamping pressure when the trigger is released. It comes with spreader attachments, that can be inserted into a gap as narrow as ¼” wide, and V-jaws that securely hold pipes, dowels, or other irregular-shaped materials. With the included feet, it can also be used as a jack, for installing cabinets for instance, with a capacity of 300 pounds.

The latest innovation Mr. Thomas has come up with is a prototype pressure indicator gauge, which also fits perfectly onto the clamping bars. Using the pressure indicator takes all the guesswork out of the clamping or spreading process, so you don’t end up under clamping by 60% or over clamping by 40%. His firm is currently in negotiations with a major adhesives manufacturer, with the goal of coming up with a set of optimal pressures for various types of glue and species of wood.

With good specs from the glue people, and the ability to consistently clamp to those specs, getting a perfect, strong joint (not the kind you get in Colorado) will be a whole lot easier. The Jack Clamp pressure indicator will work with all sizes of the Jack Clamp, including any new sizes that might be introduced. They hope to have their pressure indicator available soon; we’ll keep you posted.

Meanwhile, if you’re interested in owning one of the best clamps on the market, check out the Jack Clamp system. The Jack Clamp has solid reviews, and it’s completely made in the U.S.A. Backed by a full lifetime warranty, the Jack Clamp is available on Amazon, or directly from the manufacturer. About $120 buys you two clamps and several accessories shown in one of the photos above. 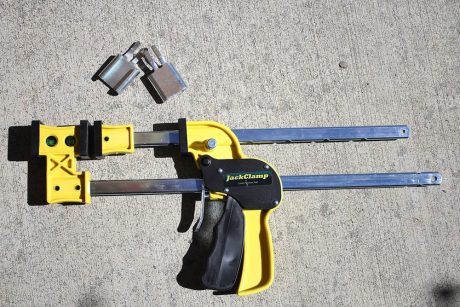