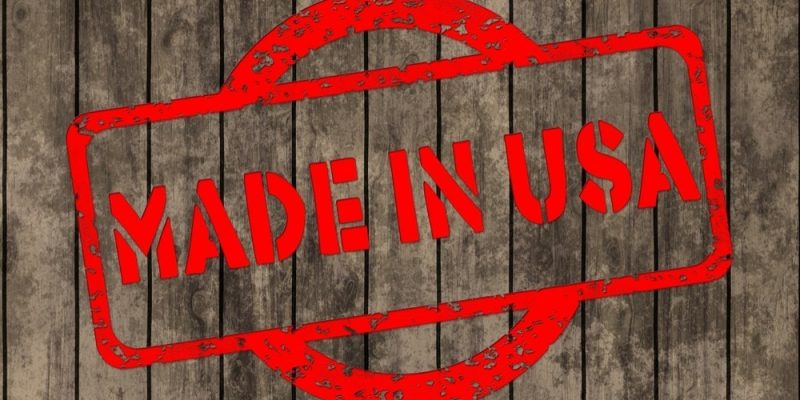 Last year, we heard about DeWalt’s new Built in the USA program at the STAFDA tool show. It definitely caught our interest. I’m still regularly surprised how little awareness there is around where and how products, and tools in particular, are manufactured. There are also a lot of misconceptions out there. It’s not uncommon to find folks that still think Milwaukee tool manufacturers all their tools in Milwaukee. Or, at the opposite end, that no tool brands manufacture in the US at all (Klein, Channellock, Vaughan hammers, Rolair compressors, Lenox and many others make most or all of their products in the USA). There’s also a growing contingent of scrappy entrepreneurs selling made in the USA products, like Simple Scribe and Jack Clamp (both current HF advertisers). Buying imported vs Made in the USA products is a heated and emotional topic. We’re not afraid to step right into the fray with some thoughts on the topic in general, as well as more details on DeWalt’s Built in the USA program.

Befor we dive into DeWalt’s Built in the USA program, I’d like to start with what I see as a fundamental problem in the US. Through a combination of foreign policy, politics, corporate policies, tax code, consumer purchasing decisions, education policy, and the shift towards globalization, the United States’ production of tangible, manufactured products is low. As Warren Buffet has pointed out on more than one occasion, we, as a country, can’t simply import everything. We need to produce. And by produce, I don’t mean the mystical shifting, trading and manipulation of value that occupies so much of Wall St. We need to make stuff people of the world want to buy. And sell it.

Sadly, speaking in general terms here, we no longer know how to make stuff. For years our education system has offered two options: 1) Go to college or 2) Work a minimum wage job you can’t support a family on. Not exactly a recipe for success. In recent years, even college grads have faced a bleak outlook for landing a solid job, let alone a stable career. Countries such as Germany offer a third alternative: get trade experience, learn highly marketable skills and make really great stuff that the world will want to buy.

To see the most glaring example of the sad demise of US manufacturing, look no further than Detroit. The city once had a population of 1.8 million. Today it’s closer to 700,000. The average price of a home in Detroit in 2012? $7,500. No, that’s not a typo. While Detroit’s decline is largely tied to the automobile industry, it’s still a vivid example of the harsh consequences of losing productive US manufacturing jobs. It’s not just a blip on the unemployment stat. The painful reality and human consequences of offshored production are all around us if you look for them.

Many of us routinely ignore that harsh reality. The masses often look for the least expensive option. Corporations too. They’re on an endless quest to squeeze more profit, often at the expense of quality. We’ve talked with quality-focused, US-made brands that simply couldn’t be in the big box stores because the brands wouldn’t or couldn’t meet the pricing the stores demanded. The result? You won’t find many premium quality goods in those stores, and goods made in the USA are few and far between too.

I’ve painted a pretty bleak picture here, but there may be a silver lining to all this (aside from the dubious honor of being able to buy a $10 pair of work boots or a $15 reciprocating saw). I think there’s a growing realization that the path the US has been on isn’t sustainable. We were once manufacturing titans, and there’s a growing chorus of voices that would like to see that happen again. Or, at least a shift back in that direction. I believe that subtle shift is what we’re starting to see signs of. Corporations across every industry, from shoes to computers, and now tools, are experimenting with onshoring (bringing production back stateside). A cynic would say all of these efforts are simply sly marketing and PR. While those are big forces with many of these initiatives, I think the trend is broader than that. Let’s take a look at DeWalt’s new Built in the USA program as a case-in-point.

DeWalt Built in the USA

This new line will initially encompass over 600 products. A closer look at the numbers shows the vast majority is in accessories. The exact breakdown is 32 hand tools, 48 power tools and 562 accessories. You can find the full list of Built in the USA products here. DeWalt’s ToolsOfTHeBrave.com site also mentions (over and over again) that these products will be made from “global materials.” It’s clear they don’t want to mislead anyone that the products are 100% American. We live in a global market, and it shouldn’t come as a shock to anyone that materials are sourced globally. It’s also safe to say that using global materials can greatly blur the line on exactly how clear and meaningful a made (or “built”) in the USA label really is. If a US worker gets a half dozen parts all manufactured overseas and fits them together with a few screws, is that tool still worthy of being called made in the USA? That’s a grey area that will likely vary from tool to tool and manufacturer to manufacturer.

DeWalt goes on to clarify that although cordless tools are prominent in the Built in the USA line, chargers and batteries are still built overseas. DeWalt has manufacturing plants in Maryland, North Carolina, South Carolina, Tennessee, Kentucky and Connecticut, but in regards to plans to open more factories: “This remains to be determined.” We don’t think this is DeWalt being cagey. It seems more like an experiment to see how the market will react and how the business numbers play out. If the Built in the USA line is a huge success, DeWalt would be hard pressed NOT to expand the program.

So, what does this new program mean in terms of new, US jobs? DeWalt estimates “more than 250 new jobs.” For a company as huge as DeWalt, 250 jobs doesn’t even amount to a rounding error in terms of US employment stats. As a frame of reference, Stanley Black & Decker (the parent company for DeWalt) has over 45,000 employees according to Forbes. Even so, it’s certainly a step in the right direction, especially compared to the more typical stat of corporations actually eliminating US manufacturing jobs by the thousands.

The PR and Marketing Angle

This section is probably a very appropriate time to share DeWalt’s Built in the USA promo video:

That voiceover is so good. It’s gritty. It’s strong. It’s proud. It’s American. I feel an urge to hop in that assembly line and start making tools! It’s all very compelling. And that’s where the PR and Marketing side become more apparent. DeWalt is, rather brilliantly, positioning itself as the Made in the USA power tool brand. Combine this with their efforts related to US combat veterans, and it’s clear DeWalt has a game plan focused on patriotism. In their press release, Frank Mannarino, president of DEWALT Professional Power Tools describes it this way:

Our users are professional contractors and builders themselves. When given the option, most prefer to spend their money on a product that is built in the USA because it’s in line with what they do on a daily basis—building America. There’s a great deal of pride that goes into making things at home – we’re thrilled to bring some jobs back to the US and reconnect with our users.

Aside from being exceedingly cautious mentioning the “global materials” disclaimer repeatedly, DeWalt is also cautious about making any big promises. When asked for future plans, actual manufacturing costs in the US vs abroad, and the actual percentage of tools being Built in the USA, DeWalt didn’t have any details to share at this time. Even if the percentage of products Built in the USA is tiny, and regardless of the business motivations, we’re still happy to see it as a renewed focus.

Where is This All Headed?

It turns out China is pretty far away from the US. That distance alone makes many aspects of doing business between the US and overseas more challenging: transportation, quality control, labor oversight, etc. are all made more complicated and potentially costly. According to DeWalt, “In order to provide a faster response to our customers, we chose to build some of our most popular cordless power tools here in the USA using global materials.” I think that hints at some of the inefficiencies of manufacturing abroad, particularly for tools popular in and destined for the US market.

Will this start an arms race of the big tool brands clamoring to onshore their tool and accessory manufacturing? I doubt it. But I wouldn’t be at all surprised to see similar programs from other brands. As other programs like DeWalt’s Built in the USA program might appear, it will be interesting to see the level of commitment to US manufacturing each brand pursues. Which programs are mere window dressing, and which are truly a major shift in manufacturing strategy?

My hope is that no matter how profit and PR-driven Made in the USA programs might be, that it’s a trend we’ll see across the broader US business landscape. A national shift in priorities leading to more skilled labor and great US products is something just about all of us can get behind.

If you’re ready to buy your Built in the USA DeWalt tools, you can bet finding them won’t be hard with their “Built in the USA” logo on the packaging. Which major tool manufacturer is up next?!