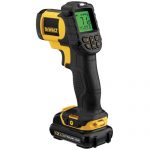 In a prior chilly season, also known as the winter of 2009, we wrote about a few tricks to tracking down and fixing breezy window drafts at home. One of the retro techniques mentioned is the old “carefullly walk around with a lit candle and see if it flickers near windows and doors.” After reviewing the DeWalt 12v Max Infrared Thermometer, we’ve got one thing to say: “Screw working with candles!” (no offense to any wax-workers out there, hold the hate mail). Actually, as usual, we’ve got more than one thing to say. Read on to hear more about DeWalt’s Infrared Thermometer.

When DeWalt sent us one of their 12v Max Infrared Thermometers (model DCT414S1), we had no idea how much fun this tool would be to review. First off, it shoots out a laser, which makes it that much more fun than conventional “non-laser” tools. Second, it’s shaped like a gun, which means you can run around your house pretending you are part of an elite laser SWAT team tasked with mercilessly eradicating drafts (just don’t go shining the laser at anyone, lasers and eyes don’t go well together, unless we’re talking Lasik). You can conduct your laser SWAT operations here and in Europe thanks to the simple button that toggles between Fahrenheit and Celsius. Beyond just being fun to use, it’s also turns out this Infrared Thermometer is downright useful.

One of the coolest, errrrr hottest feature sets on the DCT414S1 Infrared Thermometer are its three included alarm settings and the highly visible cool and hot LED. You can select a threshold of coolness or hotness which triggers either a blue or red LED, an audible beeping, or both. This enables you to quickly scan a room (while holding the trigger down). You can pay attention to where you’re pointing the laser (a good idea by the way), and you’ll know when you’ve found a chilly spot, or where some builders left a chunk of uranium in your wall that’s about to melt through your framing, just like Three Mile Island. You can’t miss the alarms; the LED is wicked bright, and the beeping is like something you’d expect from one of those digital bomb timers that they always defuse with just a split second to spare. I personally preferred the LED-only option (it’s far more stealthy and provides a more zen-like draft hunt). Anyway, From -20º F to 932º F, the DeWalt DCT414S1 has you covered.

Our only dislikes were pretty minor: 1) The battery clip is a little floppy, making the otherwise ultra-solid-feeling tool a little jiggly. 2) The manual unfolds like a retro paper map. If you’re inclined to actually read manuals, you’ll need a medium to large size work or dining table to spread this monster out on. The manual is literally 2ft x 3ft, which for you math-inclined folks equals six square feet of content (12 if you’re bilingual and count both sides). We’d like to gently suggest a more traditional manual/pamphlet to DeWalt. – End of Manual Rant – This is the kind of tool you actually might want to peruse the manual for too, especially if you want to brush up on emissivity.

If you think emissivity is a snooty way of saying farting, please continue reading. According to DeWalt:

Emissivity describes the energy-emitting characteristics of materials. Most organic materials and painted or oxidized surfaces have an emissivity of about 0.95 which is the default setting.

They also describe it as “the ability of a surface to radiate heat.” As an example, the emissivity of oxidized aluminum is .30, which means if you want accurate readings on aluminum targets, you’re going to want to dial down the emissivity setting on the thermometer. A simple click of the “EMS” button and then the up or down arrow buttons are all it takes to adjust.

The ergonomics on the pistol grip, like DeWalt’s 12v Drill Driver, are superb. The rubberized grip and display area make for a well-armored tool. A highly visible backlit LCD display is chock full of useful data and also provides a display for how much battery juice is left in your infrared thermometer. DeWalt also wisely did away with a power switch. Just pull the trigger to power-up, and, the DCT414S1 powers off automatically after a short period of inactivity. Via six clearly labeled buttons, all adjustments to emissivity and the other functions are a breeze. 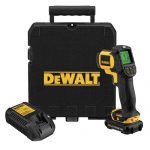 for under $150, which includes a solid case and a charger. Once you seal up all those drafts you find, this tool might just pay for itself!