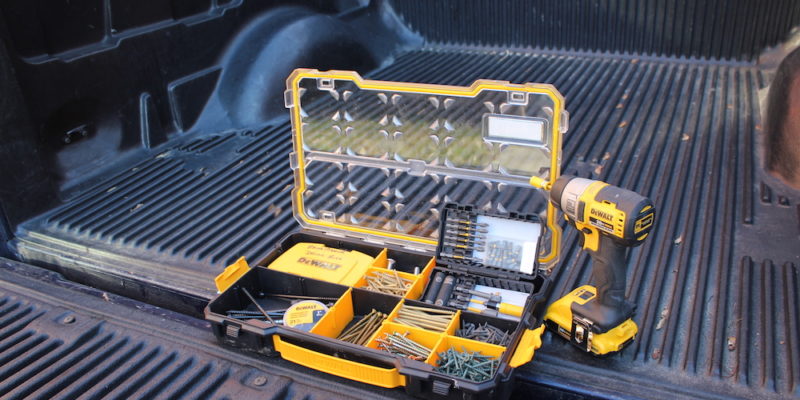 This post is sponsored by The Home Depot. Despite my best efforts to stow things where I’m SURE I’ll find them, on any given job I spend WAY too much time searching for the parts and tools I need. Although occasionally someone else is to blame for “relocating” the items I need, more often it’s likely due to a combination of encroaching senility and too much information competing for too few remaining brain cells. In any event, my efforts to get a bit better organized got a little boost when the Home Depot recently sent us a DeWalt Parts Organizer to evaluate.

With removable dividers, the DeWalt parts organizer, aka the DeWalt DWST14830, is easy to customize for fasteners or random small parts. It features a clear Polycarbonate lid, so you can see what the heck is in there without having to pop it open, and a carrying handle. Here’s the official lowdown on features and specs:

When it’s time to start packing stuff in, the DeWalt Parts Organizer offers good flexibility. The center divider that runs the length of the case is fixed, but all the other dividers can be removed, in various combinations. You can tailor your interior to have anywhere from two to twenty compartments. When the case is configured with all twenty compartments, most of them are just over 2” X 3”, with the two front corner compartments being slightly larger.

The DeWalt Parts Organizer Gets Ready For A Screw Job

I have what seems like dozens of boxes of various construction screws, drywall screws, etc. Since they are extremely adept at staying invisible when I need them, I decided to corral a bunch of them in the DeWalt parts organizer. I loaded up a bunch of screws, ranging in length from 1” to 6”, into eight compartments. I also had room to drop in two clamshell cases, one with a set of drill bits and one with an assortment of driver bits. The cases fit perfectly.

The dividers are easy to insert and remove, and fit snugly into their locking grooves. When I got the case loaded up and tilted it upright, all the screws stayed obediently in their designated crannies, even when I held the case upside-down and gave it several good shakes.

When the lid is latched, there is a slight gap between the top of the dividers and the lid. If you use the DeWalt parts organizer for small parts, such as washers and cotter pins, they might tend to migrate when the box is upright. You could easily prevent that from happening by dropping any small parts into a sandwich bag before stowing them.

Ready To Get It Together?

The DeWalt Parts Organizer that I filled with screws should be a huge time saver for me. Next time I have a fastening job, rather than finding and sorting through several boxes of screws, then locating driver and/or drill bits, I can just grab the case and go. Next up on the “Get organized” checklist, I have a hodgepodge of electrical stuff that needs a little discipline, including various connectors, tape, wire staples, zip ties, screws, and so forth. I also have a LOT more screws that will be easier to locate after my next trip to the Home Depot. For under fourteen bucks a pop, it’s a pretty cheap way to gain a little sanity.

Overall, the quality of the DeWalt Parts Organizer is very good. A steel rod running through the hinges should help the lid stay where it belongs. The case itself feels sturdy, and should hold up to a bit of being banged around. The only worry I have is whether the two front clasps will hold up to repeated bending as the lid is opened and closed.

Even if one of them does give way, the two side clasps are significantly more sturdy, and the unit should stay closed with no problem. Obviously DeWalt thinks the case is tough enough to stand up to whatever you’re dishing out, as the DeWalt Parts Organizer is backed by a limited lifetime warranty. It’s also covered by the Home Depot’s 90-day return policy. If you’re in need of some organization, grabbing a DeWalt parts organizer (or two) would be a good place to start. 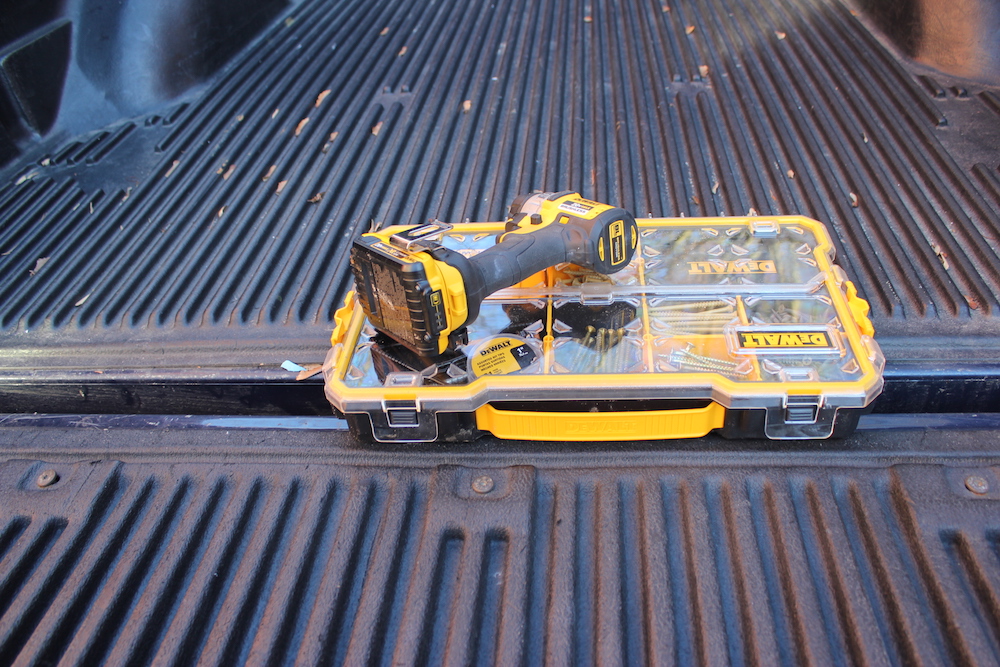 Buy the DeWalt parts organizer from the Home Depot for around $14: