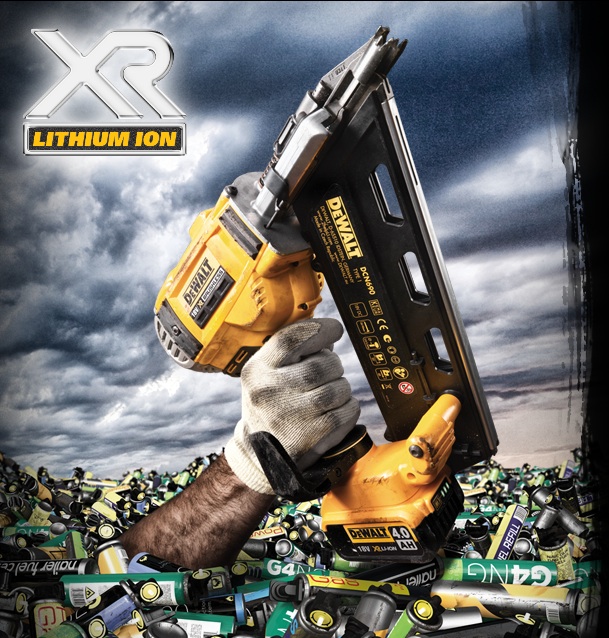 Get a sneak preview of the next big things coming from DeWalt right here, right now. This is tool journalist Michael Springer checking in with an exclusive industry report just for Home Fixated readers. I just returned from DeWalt’s annual media event where they take us behind the curtain to show off what the brand will be releasing in the next year — and beyond. I can’t reveal everything I saw, but I will share what I am not sworn to secrecy about.

As detailed below, the biggest takeaways included more new cordless tools with brushless motors, an increasing number of tools that will come standard with the brand’s higher amp-hour XR batteries, and some fun new add-on cordless tools. If asked my prediction of what lies ahead for next year, my crystal ball says that DeWalt’s battery-powered trim nailers will make the jump to brushless motors and the newer slide-pack battery platform to join the brand’s latest release in that category — their intriguing framer that premiered at last fall’s STAFDA trade show. 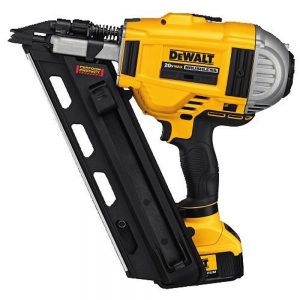 Speaking of the DeWalt cordless-battery-powered framing nailer, it was conspicuously absent from the media event. The product manager explained that the demand for hoseless nailers is greater in Europe so they are sending their limited supply of the tools to that market first. Umm, OK. This means that the tool is indefinitely unavailable in the US market. However, for those so motivated, you could order one from overseas and use your own 120-volt charger since it takes the same 20-volt max slide pack battery we use here. Of course overseas it is labeled as an 18-volt battery, but that’s a different story…

As far as tools we can get our hands on, probably the most anticipated are DeWalt’s new brushless motor drill/driver and hammerdrill/driver. Both are designed as medium-duty tools and sold in a compact format with the 20-volt max platform’s smaller 2 amp-hour batteries. Note the new headlight position down on the foot of the tools; it’s designed to reduce the size of the shadow cast by the chuck. Other differences from the existing 20-volt max drill/drivers are a higher top speed of 2,000 rpm and a metal-tipped chuck.

DeWalt also announced a new brushless motor impact driver with a single speed setting. It’s a simpler and less expensive model than the existing brushless motor three-speed impact driver HF previously reviewed, but it delivers the same maximum driving power according to the brand. It features a typical bit holder instead of the ultra-short embedded one of the three-speed model. However, both bit holders fit one-inch long bits — a great feature for any impact driver as the shorter the bit, the less it flexes under impact load. 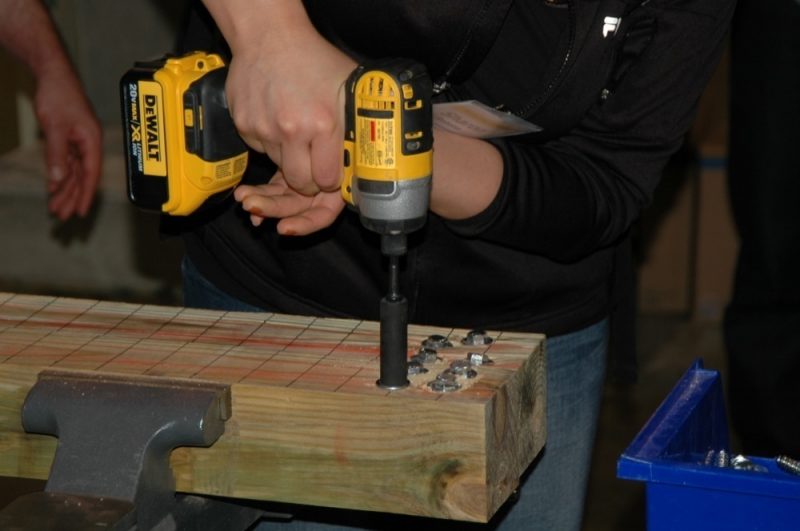 Hmm, looks like the product line needs an impact wrench for driving bolts and lags. Unless I heard wrong, expect the “high-torque impact wrench” to join the 20-volt max brushless line sooner than later. 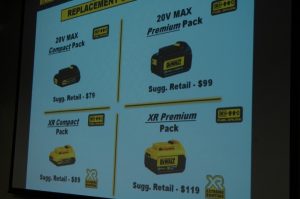 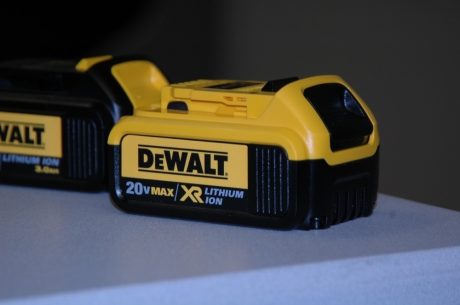 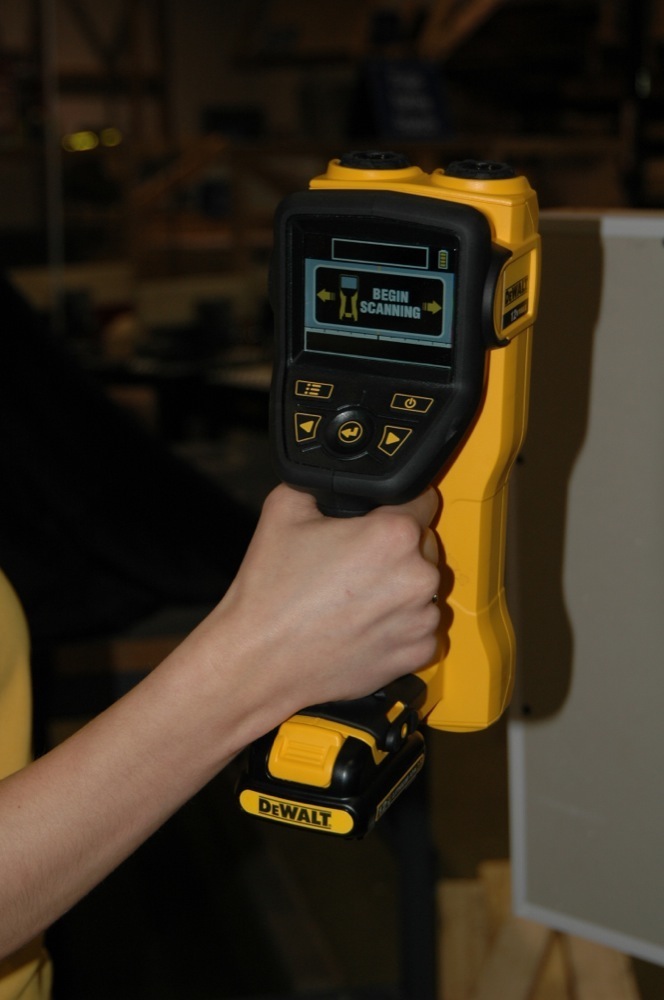 Another standout tool shown at the event was the radar wall scanner from DeWalt’s 12-volt max line. It detects wood, ferrous metal, non-ferrous metal, PVC and live wiring through surfaces up to 3 inches thick. The scanner prevents confusing readouts by showing a pictographic image of the material being detected on its large color screen. This way it can be used with certainty on the job without any language barrier.

DeWalt’s fourth generation battery-charging job site stereo is out and ready to rock. This new model can be powered by or charge the brand’s 12-volt max or 20-volt max slide packs, but users of 18-volt NiCad and lithium ion tower battery packs need not apply. An interior USB port lets you charge electronic devices as well while they stay protected inside a sealed compartment. The same compartment will hold various media players while they are connected through the stereo’s auxiliary port. This new model is a bit smaller and lighter than previous versions but is said to be just as large in the sound department.

And speaking of music (or musica), DeWalt announced the May 15 launch of their own Pandora radio stations; DeWalt Radio and DeWalt Latino. Both stations will feature commercials only from their brand. Subscriptions still have to go through your phone or other device though, the new stereo does not include a satellite radio tuner. Maybe on the fifth generation.

One under-sung hero among remodelers and installation and repair contractors is the portable, cordless vacuum. Besides general clean up uses, these little suckers are extremely handy to have around to collect dust at the source while you drill or saw in a finished space, and they’re much more effective than a dust pan for quickly picking up a line of debris after sweeping. For wet uses, mini-vacs are the way to go for cleaning up flooded cabinets after a plumbing leak and for completely draining the tank, bowl and trap of a toilet to remove it without running a trail of icky “water” through the house. DeWalt has two new mini-vacs: one cordless only and one cordless and corded. Both units run on any of the brand’s 18-volt tower packs or 20-volt max slide packs for maximum versatility, and neither is sold with any batteries. When fitted with a 4 amp-hour slide pack, the vacs’ approximate run time is 25 to30 minutes.

Last but not least, in hand tool news, DeWalt unveiled a series of socket wrench and combination wrench kits to be retailed at Sears starting this summer. 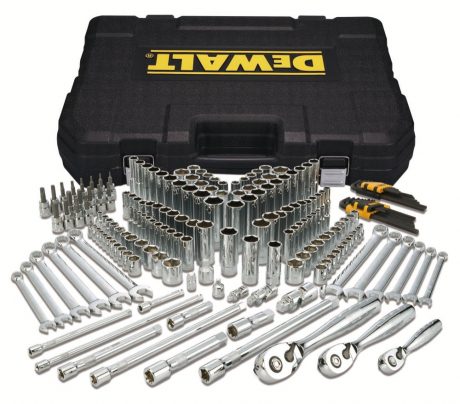