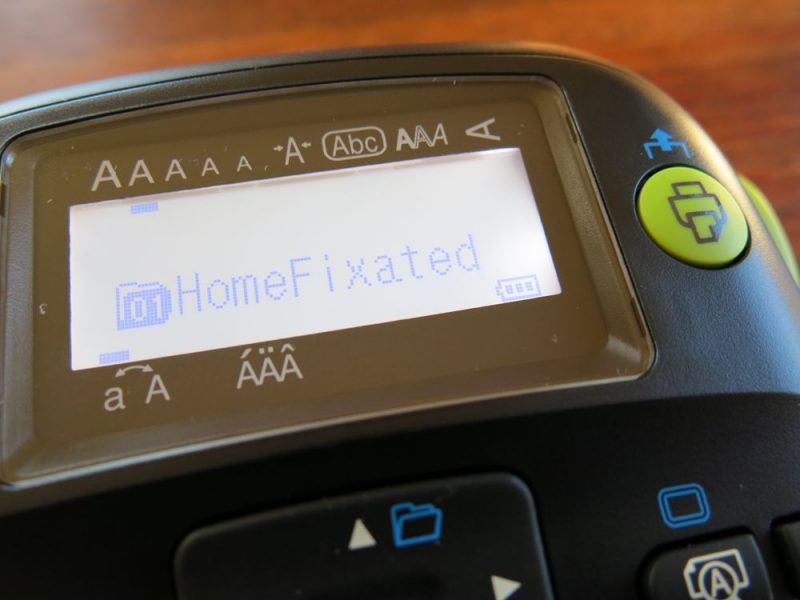 Several months ago we did a review of the Bosch L-Boxx 1A. We found it to be a very solid, versatile, transportable way to organize things around the shop. Unfortunately, once we put stuff in the L-Boxx, we had absolutely no clue which L-Boxx had what in it. In addition to the L-Boxx mystery, some of our tools were playing hard-to-get too. While a few of our more beloved tools are out in the open, free-range style, many are safely stored away in the fairly nondescript boxes they came in. Some manufacturers are kind enough to label the boxes, but most don’t. The result is a shop that makes finding the right tool more like an Easter egg hunt than a quick grab. We needed help, and the folks at Epson sent it to us in the form an LW-400 Label Maker to review. 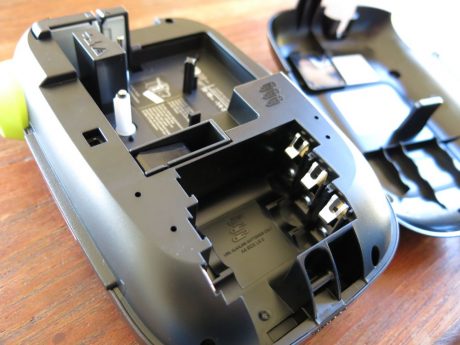 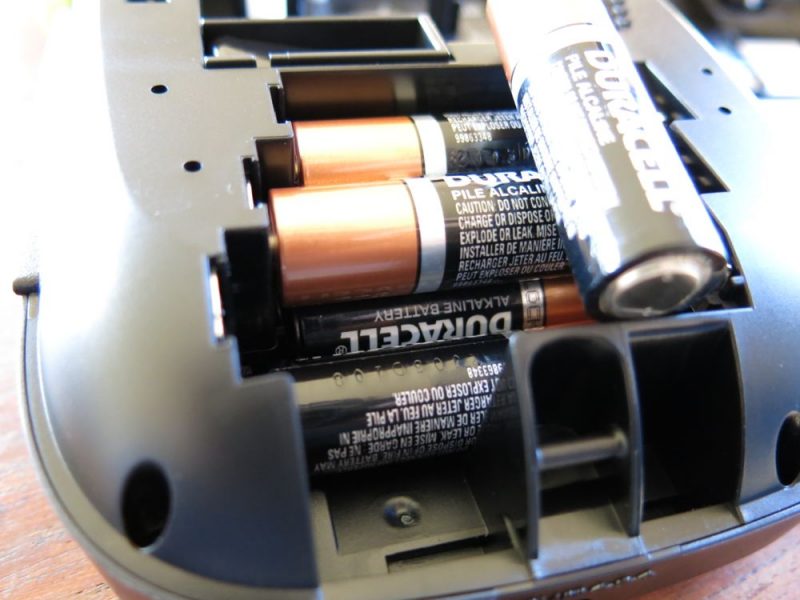 Before we dive into what we started labeling, let’s cover some basics about the LW-400. A sexy, backlit display greets you when powering up the unit. If you’re used to noisy printers, or, god forbid, you remember something called a Dot Matrix printer, you’ll be delighted at how quiet the LW-400 is. It’s about as close to silent as you can expect any type of printer to be. Imagine a tiny kitten purring and you’ll get the idea. A back lid pops right off, which is where you’ll need to load up six AA batteries to power things up. There’s also a power jack on the front of the unit, but we can’t really imagine using this gadget tethered to a power cord. Once you get hooked on labeling, you’ll find yourself roving the house, labeling everything, including things that don’t need labels, like microwaves:

The LW-400 Label Printer has a lot of buttons. Granted, most of them are the alphabet or numbers, but there are quite a few more. While the control panel might look a little intimidating at first, we found it doesn’t take too long to find your way around. The soft touch buttons have a nice feel to them, and the keys provide a good feedback when typing. The keyboard itself looks like an old-skool Blackberry keyboard on steroids. Function keys across the top let you select settings, fonts, styles, outlines and even symbols. A shift button gives you access to common punctuation, and a caps lock is available if you’re bold like that. A four way button lets you navigate through the various fonts and options, using the return key in the lower right to select what you want. You can also select specialty label styles like flags, which can be useful for labeling cables. Settings like character spacing and label length settings can also be tweaked to your heart’s content. 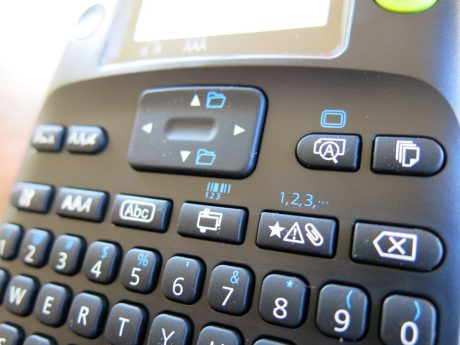 Epson sent us an assortment of labels which included basic white, reflective silver, and extra-wide glow in the dark. They even have iron-on labels for clothes. Loading and swapping out label cartridges couldn’t be much simpler; just pop off the back of the unit and toss in the cartridge. You’ll want to make sure the label is fed into the right place, but that’s not hard at all. Voyeurs can delight, Epson also thoughtfully included a transparent window on the back so you know when you’re running low on label or in case you just want to peek in on your cartridges.

The biggest “feature” of the label is a split back design. While this may not sound like a big deal, the last thing anyone wants to be doing when printing tons of labels is spent 10 minutes trying to remove the backing from each label. Epson’s LabelWorks label backing is split down the center. All you need to do to remove the backing is just gently bend the label a bit from the back and each strip peals right off with zero to minimal fuss. 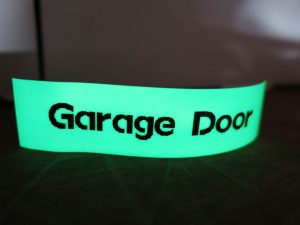 The availability of exotic label styles is nice. We put one next to our garage door opener switch. If the label is charged with sun like ours was, it’s downright blinding at first. Without a recent charge they still show a little luminance, but if the label will always be in the dark anyway, we’re not sure how useful the glow is. Metallics are also available if you’re flashy like that. After experimenting with a slew of tapes, we went right back to the default white version. The black print on white background provides outstanding contrast, making labels very easy to read.

With fourteen font options and ten styles, you can get your label on with flavors ranging from bold to script. We found most of the fonts and styles to be pretty readable, however some fonts and styles are more suited to easy reading than others. Plus, there was no way we were going to label our tools in flowery script fonts. Since Helvetica was nowhere to be found, we stuck mostly with sans serif style fonts for most labeling purposes. 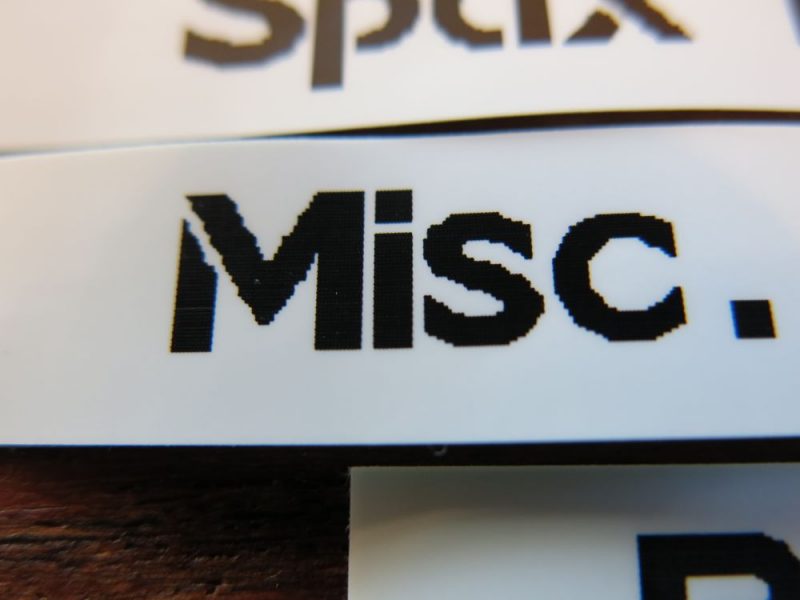 Despite perfectly acceptable readability, we were slightly disappointed in the print quality in terms of pixelation. The image shown here is a bit exaggerated due to the extreme closeup, but it shows the blocky outlines created by the printer. Given how far printing tech has come, it would be cool to see a new version of this printer that prints at a higher resolution. With that said, if you’re looking at the label at anything over a foot away (or closer if you have bad vision), the pixelation isn’t apparent.

Alright, enough about the tech spec’s already! What kind of labeling jobs did we task the Epson LW-400 with? As mentioned at the start of the article, we had some tools and shop gear to organize. First up, labeling our “contents unknown” Bosch L-Boxxes. As you can see from the before and after here, the LW-400 made quick work of taking the mystery out of what was stored inside.

Next up, those nondescript tool boxes containing our prized tool possessions. It was time to take the treasure hunt element out of going to grab a tool.

Lastly, we even labeled things in the bathroom. At the risk of providing too much information, we have a problem with our guest bath that we’ve described before. Previously, guests were greeted with a mystery trio of switches to choose from. Two switches controlled lighting and the third controlled an ancient ceiling heater that terrifies me every time it is turned on (I expect it to burn down the house every time). Our guests would occasionally turn on the “fan” thinking they were ventilating the small bath. Little did they know, they were heating the bathroom “aroma” instead. Our bath doesn’t have a vent, but it does have a window. They’d also tend to leave the “fan” on, dramatically increasing the risk of our house burning down, and making the bathroom unbearably hot for the next guest. I haven’t labeled the window, yet, but now that the switches are labeled we’re anticipating fewer misunderstandings. 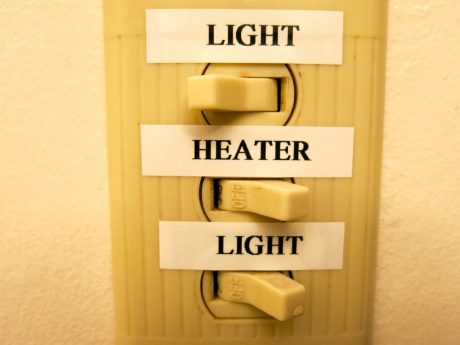 The LW-400 is an addictive accessory to your home and shop, and a dream come true for anyone who likes to organize efficiently. Sometimes less is more though, and as much as we like options, we think a few fewer features on this gadget would actually make for a more user-friendly design. The LW-400 packs 14 fonts, 10 styles, 300+ built-in symbols, over 75 frames, and even bar code capabilities into one compact package. I’m not ready to barcode my tools, but some business users might find the extra features useful. Printing (and cutting) functionality were stellar. The jumbo cutter button had smooth action and isn’t something you’re likely to press accidentally. We also didn’t find ourselves cutting off tons of surplus tape, which is a common complaint on some label printers. It seems some brands feed extra blank space before and after a label, which a skeptical person might think is designed to sell more label cartridges. Epson claims up to 60% less margin waste on this model. 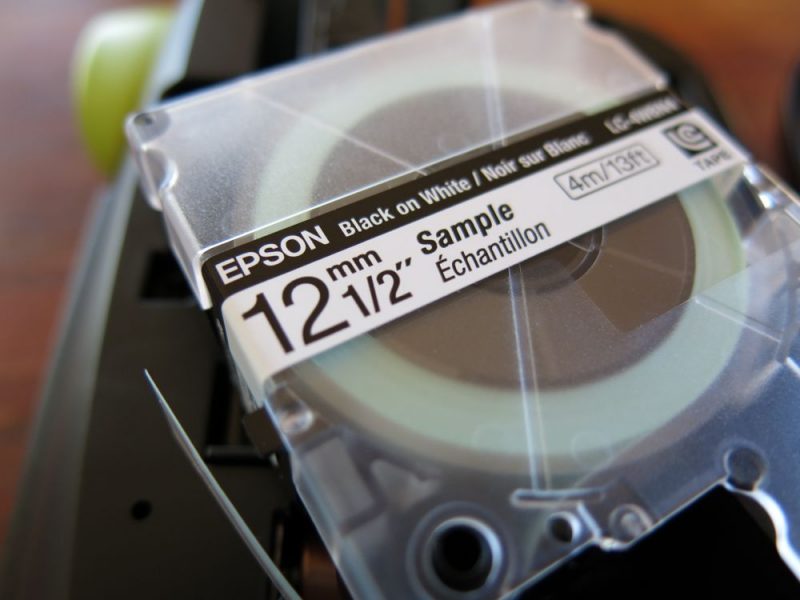 For what you’ll get out of it in terms of increased organization and efficiency, this handy gadget is a MAJOR bargain. You can pick up the Epson LabelWorks LW-400 Label Maker

for less than $30 on Amazon. Epson Tape Cartridges