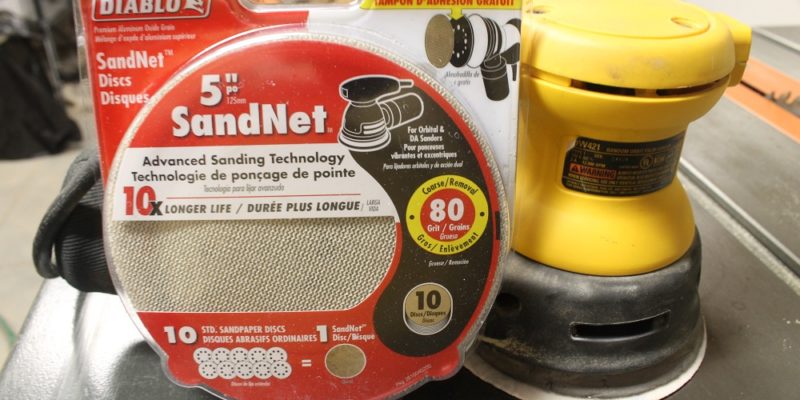 This post is sponsored by The Home Depot. Almost every project I tackle involves a lot of sanding, which inevitably translates to my decimating stacks of sanding discs by way of my random orbital sander. Diablo abrasives have been my go-to for years now. So when Home Depot offered up a 10-pack of Freud’s new Diablo Sandnet 5” sanding discs for evaluation, I was all over it. The gritty allure of 10x sanding life has been calling my name for months now, since first I saw its roughened face. But does it really live up to the hype? Well, yes. Mostly. It depends on how you use them. Let me give you the rough and smooth of Diablo Sandnet sanding discs.

Diablo’s Sandnet discs are a mesh style sanding abrasive designed for use on 5” random orbital sanders (ROS). They are compatible with all 5 or 8 hole models – providing you have a standard hook and loop pad – and are available in 6 different grits: 80, 120, 180, 220, 320 and 400. Their biggest claim to fame is a very high resistance to clogging.

Standard hook and loop sanding discs are fuzzy on the back. Sandnet discs have more of a bristly peach fuzz that doesn’t stick quite as well to standard pads. So each pack includes a free application pad that interfaces your existing hook and loop with Sandnet discs, for excellent grab that holds every bit as well as you’re used to.

When you want to switch back to a standard abrasive disc, pull off the reusable application pad and your ROS is back to its original state.

Diablo Sandnet – The Devil Is In The Details

Diablo Sandnet is so named because of its woven, net-like structure, which aides in dust collection and clog prevention. The aluminum oxide grains stay sharp for a reasonably long period of time, thanks to their “friablility”. That is, the grains break apart with wear to expose new, sharp cutting points and edges. The abrasive does wear smaller with use, but it doesn’t lose all its cutting power until it’s worn away to almost nothing. In other words, it’s exactly what you’d expect from a high quality abrasive.

Dust Collection – Not A Problem With Sandnet Discs

Given the lack of punched holes, you might wonder how well Sandnet discs will work with your ROS’s dust collection. Well, the truth is: it works exactly as well as discs having punched holes. Actually, I’d dare to say it works a little better.

I usually have a lot of collateral dust slinging onto my workbench and into the air when sanding near the edges of a work piece. In my observation, that seems to be less of an issue with Sandnet discs. I’m guessing it’s because dust is allowed some lateral movement and isn’t restricted to passing through only at the usual 5 or 8 holes.

The lack of punched holes means no more fussing with alignment. You just stick it on and go. Since Sandnet is a mesh, dust works its way through the entire surface of the disc. In addition to making the discs stick better, the application pad also protects your existing hook and loop pad from excessive dust and debris.

Sandnet discs can be used in just about any application were you’d otherwise use a standard sanding disc: wood, metal, plastics and other solid surfaces. One exception I’ve found is really rough pallet wood. We’ll get back to that shortly.

When smoothing flat surfaces and removing finishes, Diablo Sandnet really shines. You can sand a surprisingly large area with a single disc. The 10x claim comes from the fact that you can clean away any clogs and continue using the disc, rather than constantly having to grab a new one.

Standard sanding discs often become useless long before the abrasive is actually worn out. Instead, they stop working because they’re clogged. But when a Sandnet disc starts loading with material, you can shake or vacuum the dust free, or even rinse it with water. While one disc is drying, grab another and continue working.

In cases where clogging is killing your sandpaper, Sandnet has a huge, undeniable advantage. I stripped several different types of finishes off of pine, oak, maple, walnut, cedar, aluminum and steel with absolutely no problem. Everything in the picture above – and more – was sanded (top and bottom side) with one disc. The disc had plenty of life remaining afterwards. There was moderate wear of the abrasive grains and minimal clogging. What little clogging did occur was easily cleared away by removing and shaking the disc.

The material you’re sanding is still going to affect the life of the abrasive itself. For example, rusty steel is likely to wear the discs as quickly as it would Diablo’s traditional sanding discs. So – in some cases – you may not necessarily get a huge life extension.

I put Sandnet through two abusive tests, with wildly different results. First, I sanded on a piece of brushed aluminum for several minutes (something I’d never do in real life). If you’ve ever tried to sand or grind aluminum, you know that it clogs abrasives, making them useless almost immediately. So I was pleasantly surprised when – after scouring sheet aluminum – I was able to sand the paint off of wood with only moderate loss of performance. That said, it’s generally not a good idea to sand or grind aluminum; unless you just like wasting your consumables.

My second abusive test exposed the weakness inherent in Sandnet’s mesh structure. I sanded both sides of 6 salvaged (but gnarly) pallet boards of varying textures, splintery-ness and roughnesses. On the smoother sides, all was well.

However, when I tried to knock down sharp edges, corners and splintery, undulating surfaces, the discs got destroyed rather quickly. Any protruding areas that could catch and tear the mesh, did.

So – if you’re working with reclaimed pallet wood – you may want to stick to traditional sanding discs; at least for the roughest work. You can always switch to finer grit Sandnet after knocking down the worst parts with a standard 80-grit disc. By its very nature, pallet wood can be quite abusive, even to traditional discs; but they’re more likely to hold together long enough to actually make some progress.

Our friends over at CopTool.com caught the Diablo Sandnet in action at a media event earlier this year:

Diablo Sandnet – Getting Down To The Nitty Gritty

Whether or not Diablo Sandnet is right for you depends on your application. For most of your sanding needs, you will indeed get much greater mileage out of Diablo Sandnet over traditional sanding discs. Just avoid situations where catching and tearing is likely to occur.

For my “normal” sanding needs, Sandnet is a worthy contender that will get plenty of use (up to 10x as much!) in my shop. Quality abrasives can be expensive (and cheap abrasives are generally worthless). So anything that will stretch my sanding dollar is worthy of consideration. Granted, it won’t replace standard sanding discs for every possible situation; but it definitely has its calling. Grab a pack the next time you’re at Home Depot and give them a try. You may very well find that you have a new favorite!

Diablo Sandnet 5” sanding discs are available in six different grits. A pack of 10 can be purchased from Home Depot for $14.97.