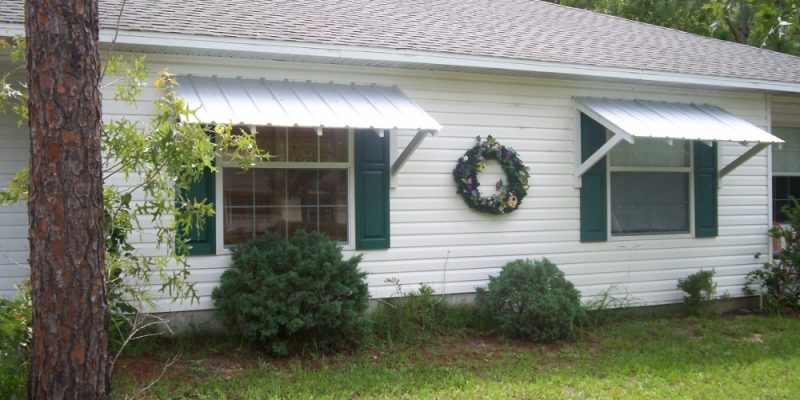 Don’t you just hate it when the sun is in your eyes? Your house hates it too. So why not build it a pair of sunglasses? Simple DIY awnings are but just a few cuts and screws away. Use this guide to basic wood and metal window awnings and create your own one-of-a-kind window dressing that takes the yawning out of awning.

My dad loves to come up with “little” projects to do around the house. I think it’s how he relaxes, but it’s also a sign he’s been out in the sun a little too much and has gone a little crazy. Either that or we’d better check his medication again. No matter what it is, he nailed it when he created these simple yet effective awnings. I liked them right away because it took less than a day to assemble and the materials aren’t that expensive. 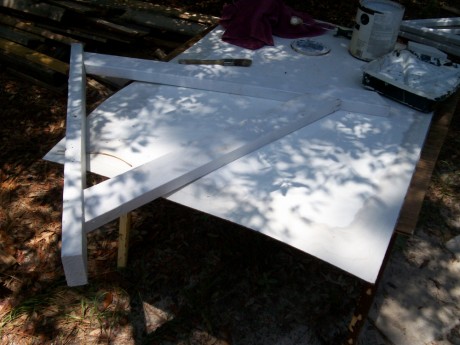 The good news for us was that we already had a stash of materials and it cost us practically nothing to build two wood frame/metal roof awnings. The bad news for you is that you probably don’t have a few sheets of metal roofing lying around your backyard and you’ll need to go out and get some. But the good news about that is that now you can get them already finished and cut to size.

We also had a bunch of yellow pine structural 2×4’s laying around that needed to be used. Since they had weathered outdoors already, they had done all of the twisting and warping they were going to do and were perfect for this job. 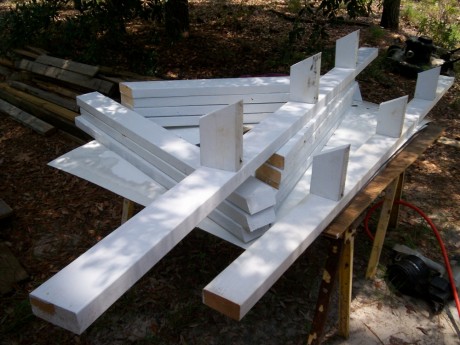 With a bit of white exterior paint and a few galvanized exterior decking screws, we painted the 2×4’s after we cut them and assembled the basic A-frame that would serve to hold up the roofing material for the awning. 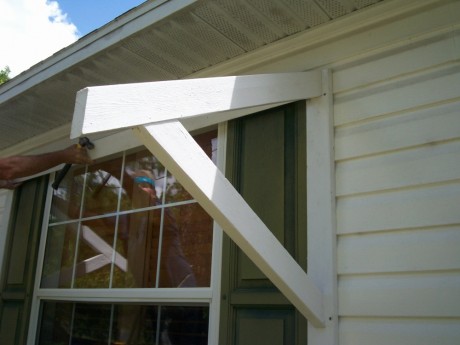 For the part of the A-frame that rests against the home, we cut the bottom flush and cut a 26 degree bevel at the top. It’s actually a 26.57 degree bevel to match a 6/12 pitch but it’s a little tough to get the extra .57 degree’s on a circular saw. We cut these boards to a length of 40” from square point to long point.

For the top piece (barge rafter) of the A-frame, we cut this board to a length of 40” as well. But instead of cutting a bevel and square end, we cut both ends with a 6/12 pitch. Just like a rafter, we cut our ends so that one angle has the long point and the other side has the short point.

The remaining part of the A-frame got cut to a length of 34”. This board was cut a little differently too. We still cut two 6/12 angles on each board, but we flipped one around so that the 34” measurement travels from short point to short point of the angle.

The top rafters were the easy part of the job. The two sides that hold the rafters in place are already on the A-frame assembly. All that’s really needed is two horizontal rafters, a piece of deadwood to hold it all to the wall and a few dummy ends cut to look like the rafter tails.

We cut three rafter pieces at 85 ½” with square ends on each side. Of course, for your window, the dimensions will very likely be different. We cut the three dummy rafter tails flush on one side and with a 6/12 pitch on the other ends. These were cut 6” long to match the ends of the A-frame rafters. 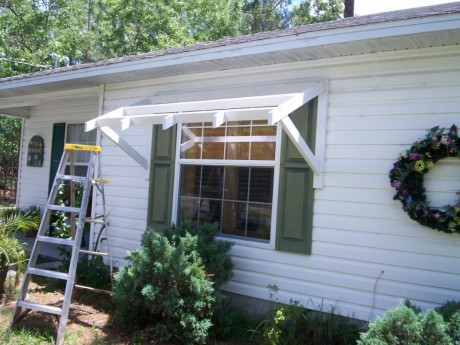 This part of the project was fairly simple too. We fastened the A-frame pieces together on the ground, and then we installed them against the wall of the house. Since the house has a wood frame exterior, it was pretty easy to screw the A-frames in place. It wouldn’t be that much tougher to drill for some tapcons or redheads if you have a block home. Just make sure whatever you are fastening to is solid and structural.

Once the two sides were up, it was all cruising downhill from there. We attached the three horizontal joists between the two A-frame pieces. For the piece with the fake tails, we attached them to a joist first before we attached it to the rest of the awning.

Once the frame was up, it only lacked a metal roof. We used a three foot wide panel (since we had some lying around anyways) and rip cut one piece so that all three metal panels fit evenly over the top of the awning. With a few well-placed metal roofing screws complete with butyl grommets, the roof was on and the awnings were complete. Sunlight glare eliminated!