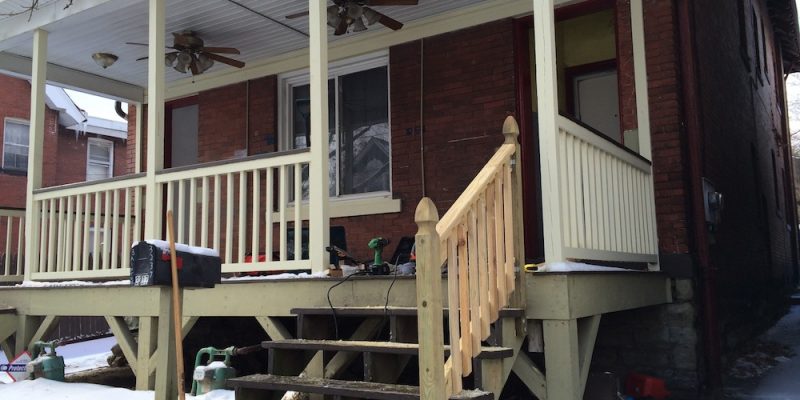 Even if you don’t live in the frozen hinterlands, if you have steps leading up to your porch, a handrail is a necessity for safety. Even if you’re young and spry, like I was several years back, your mother-in-law, or the 87-year-old Jehovah’s Witness delivering your latest Watchtower magazine, may not be. And if they do a face plant off your steps, guess who’s gonna get sued? That would be YOU – the negligent homeowner. Local building codes vary, but pretty much anywhere, if you have a deck or porch 30” or more above ground level (lower in some areas), a railing is required, as is a handrail along the stairs. The average height for the railing is usually 34-38” high, off the nose of the tread. Before you start putting yours together, check with your local building inspector; you might also need a permit.

Ready To Build A Railing? Step Right Up!

We recently bought a duplex, which we’ll be using as a rental property. The building itself is pretty solid, although there are a few projects on the to-do list – check back to see some of them. The building has a porch across the front, and the porch is in decent shape; it appears to have been re-built not long ago. There are two sets of stairs, one for each unit, and the stairs are also in good shape, aside from being covered with snow and ice. Neither, however, had a railing. Being averse to broken limbs and lawsuits, fixing that became Job One on the to-do list.

There are several railing options available at most home centers, including turned and plain spindles, various post styles in pressure treated wood or vinyl, even wrought iron railings – let your budget and building style be your guide. Our mission was to build a railing that was sturdy and inexpensive, yet a thing of beauty to behold. We wanted to match the existing porch railing; it’s a pretty simple design, with plain 2X2” spindles.

Wrench, adjustable or socket, to tighten nuts on carriage bolts

Oscillating multitool or jigsaw, to notch stair tread or ends of porch flooring

Snow shovel and ice chipper, depending on your location

Some Assembly Required – But Not Much!

The posts we used were 4X4” (actual width 3.25”) and 48” long. To better withstand the snow belt weather, they’re made of pressure treated wood. The bottom was notched about 6” up, allowing the post to rest partially on the step, with the inside face of the post tight up against the stair stringer. We installed the first post on the top step, flush with the front edge of the porch trim. To do so, we had to cut two notches: one in the lip of the floor, where it hung over the front edge of the porch by about an inch, and one in the stair tread, where it stuck out beyond the edge of the stringer by about 1-½”. To make these cuts, I used my oscillating multitool, but a jig saw or Sawzall would work fine too.

Once the cuts were made, we positioned the post in the notch, and held the level on it to check for plumb. It was right on for the front-to-back plane, but leaning out just a tad for the side-to-side. While holding the post in place, we drilled two ½” holes, then ran the carriage bolts through, slid the washers on, and started the nuts. To correct the lean, when we tightened the bolts, we just added a shim between the bottom of the post and the side of the stringer, and it straightened it out nicely.

After snugging up the nuts, we notched out the bottom stair tread, drilled our holes, and bolted the bottom post into position. To give the posts a bit of added strength, we ran a few exterior-grade screws through the posts and into the stair tread and the face of the porch, toenailing them in.

Then it was on to the next step in our quest to build a railing: installing the rails. We measured up from the nose of the tread to determine the height we needed to the top of the rail (36”), and marked the location on both posts. Then we just held the 10’ 2X4 against the edge of the posts, lined up with our marks, and marked the angle to cut on each end. We made the cuts with the circular saw, then added brackets to each end, attaching them with joist hangar nails This allows for an easy, strong attachment between rail and post. We made the lower rail the same way, then held the rails to our marks, centered them on the posts, and attached them to the posts using the same type of brackets.

Next, we took our rail cap, and held it alongside the posts just above the top rail, where it was to be installed. We marked the angle on the top and bottom where it would meet the post, set the blade on the circular saw to match, and cut it to length. Then it was just a matter of setting it on top of the rail and attaching it through the top into the support rail with six exterior-grade screws. We bought brown ones, which blend in with the wood pretty well.

To finish up, we attached the 2X2 balusters. The building code requires no more than a 4” gap between them, so we measured 4” from each end and installed the end balusters first. To try and get the spacing as even as possible, we then split the difference for the remaining balusters, and the gap ended up being about 3-¼” between all of the balusters. The difference isn’t noticeable unless you’re really looking for it – and we aren’t. We screwed the tops of all of them in first, then went back with the level and plumbed them up before screwing the bottoms in.

And that’s it! Even on a cold, crappy winter day, it took us less than three hours to build a railing that’s sturdy and (moderately) attractive. After the weather breaks, we’ll go back and add some finishing touches. We want to add some wood filler to the screw holes, so it looks better, and after the wood has had a chance to dry out, we’ll paint the whole thing to match the existing porch railing. In the meantime, though, regardless of whether the steps are covered with ice and snow, or the porch-sitters have had one too many relaxing beverages, it will be a whole lot easier, and safer, for anyone who has to clamber up and down those stairs. 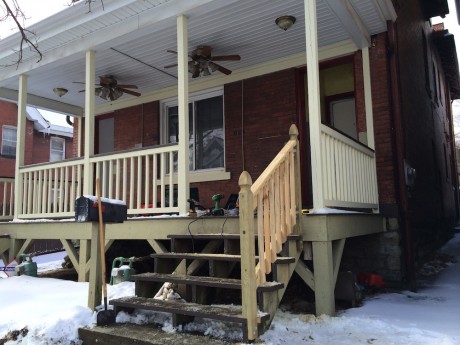