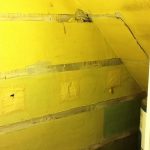 I like closets, at least in my mind, but often they get forgotten. Like mine did. Shortly after Christmas I had an issue with my hot water heater that is stored in the downstairs closet. The hot water heater definitely had to go, but once I removed the junk that our closet held, it got me looking at how awful the closet actually was. Closets in general seem to get the very least attention of any space in the house.  You throw in your clothes or shoes, a random vacuum cleaner, odds and ends, the occasional tool, etc. They really are the junk drawers of the house. Because of their red-headed stepchild status, closets tend to be neglected and can fall into disrepair quickly. As I see it, there are at least three reasons why you shouldn’t neglect your closets.

Your house is your castle, so why treat a closet like an extra bathroom and crap in it? I’ve seen closets that deserve their own hoarding show.  And what do most people do when the have people coming over? They throw all their extra crap into the closet and cram the door until it’s latched. One slight turn of the knob is capable of causing an avalanche of random junk. First, respect your stuff by either properly storing it or getting rid of it all together. Next, respect your house. Just like you spend time checking out the car every two weeks; checking the oil and other fluids as well as tire pressure, battery terminals and so on (You do, don’t you?), check your house. Closets are an important part of your house that gets overlooked so very often.

I don’t care how nice a home you have, if you try to sell it and someone opens the closet door and the drywall has holes in it or it hasn’t been painted in 45 years, then the price just went down. I’ve known people who paint their walls every two years but the hallway closet has that 1950’s lime green paint still radiating in your face when you open the closet door.  And if you’re looking to sell your house, do you really want to spend time repainting the closets as you start packing? Please.

3. Your Closet Is Your Good-Bad Homeowner Litmus Test

A closet can be a good indicator as to the ‘health’ of the rest of your house. Unlike the walls in your living room that have been painted every three or four years and are fawned over, closets are left to sit with in their increasingly banged-up state. It’s easy to see cracks and failing plaster or chipping paint or worse things like termite damage in an area that isn’t cleaned constantly.

I know I forget about the closets all the time until something happens. In fact, as you can see in these pictures, several people over the course of my house’s life have forgotten about the closets. Outside of the shag carpet and cracking plaster, there were a few other uglifications:  old termite damage, broken trim, and paint that looked more school bus-ish than house. Forgetting and moving on is an easy thing to do, but maintaining your closets is an important part of homeownership.