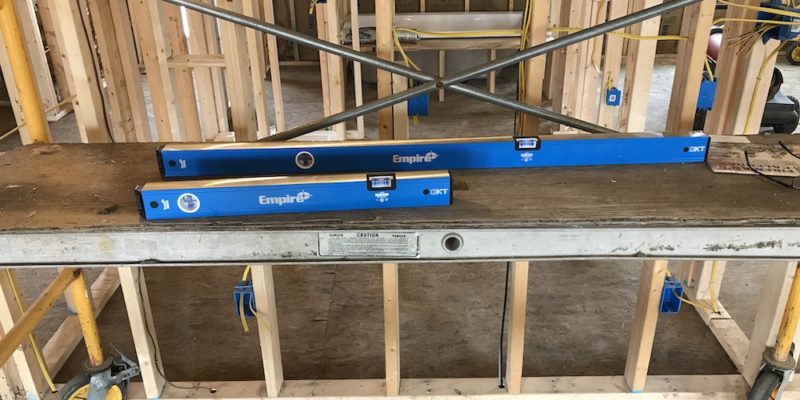 I gotta level with you: I have a LOT of levels. They run the gamut from cool old wooden levels (some of which aren’t as straight or accurate as they used to be) to sporty high-tech illuminated levels. Sizes range from little pocket torpedo levels to the big 78-inchers. While having the right level for just about every situation is great, having to lug three or four of them to a job site is somewhat LESS great. My inner efficient self just got a great new option, in the form of the new eXT line of Empire Extendable Levels. Find a level-ish spot to get comfy, and join us for an extended look.

What’s the big deal about an extendable level? Using an extendable level allows you to check for plumb or level in either an enclosed space or on an exterior surface, while keeping the level in contact with the entire surface. This lets you check that a door jamb is plumb and straight over its entire length, or a run of cabinets is in the same plane all the way across, assuring you of maximum accuracy.

Empire Extendable Levels are available in two sizes. For door headers and other smaller stuff, the Empire eXT40 extends from 24”-40”. To handle bigger projects, like door jambs and long runs of cabinets, the big blue Empire eXT78 covers the spread from 48”-78.” Both models are very robustly constructed, with durable bushings and a slide mechanism that can be adjusted to control the friction fit. Here’s the official spec and feature list, followed by a plumb informative video from Empire:

When I first heard we’d be getting extendable levels to evaluate, I was a little skeptical. I wondered how well any level could remain straight and solid, with a good portion of it hanging out there in the breeze.

When I slid the Empire Extendable Levels out of their packaging, my doubts began to recede. These things are SOLID, and the build quality is excellent. They feel very robust, and the precision milled edges means they should be very accurate. Empire guarantees the levels will be accurate within .0005” – unless you’re building a launch tower for the space shuttle, that should suffice!

The true test, of course, comes when the extensions are pulled out. On both levels, there was absolutely zero play, even with the extensions fully extended. Want the extension to slide out a little easier, or to be a bit snugger? An adjustment screw lets you dial it in just the way you like it.

A Level With A True Blue View

While it’s great to have a sturdy level, it’s also helpful to be able to easily see how plumb or level your project is. The unique high-contrast blue vials in the Empire Extendable Levels make it fast and easy to get that info.

Made in the USA, the e-Band vials provide a clear and easy-to-read view of the bubble. The horizontal vial is visible from the top and front, and the plumb vial on both levels is visible from both sides, once the extension is slid out a few inches.

Once you’ve found your plumb or level line, scribing that line onto your work surface is a snap. The extension provides an unbroken line from the level, so you get a perfect line. If you need to scribe into a corner, the end caps pop off easily, allowing the body of the level to fit snugly into the corner.

There’s another useful feature that appears when the extensions are out. Both levels have measurement scales printed on the extensions, providing a readout of the total extended length. The markings are clear and easy to read, and there’s a scale for both good old ‘Merican feet and inches, and those mysterious metric measurements…

My original intent was to use the Empire Extendable Levels during the installation of the interior doors and kitchen cabinets in a large addition. Unfortunately, at the moment all construction has been halted here, as it has in much of the country, due to the COVID-19 outbreak. Fortunately, the addition was framed up, roofed, and made weather-tight before the stoppage.

I brought the Empire Extendable Levels to the job site, and used them to double-check the door openings for plumb and level. While I was at it, I double-checked the layout for the kitchen cabinets, and plumb and level for the walk-in shower walls and floor. Everything was spot on – naturally!

The levels were also pressed into service to plumb up an enlarged entry doorway I’m getting ready to trim out. It was nice not to have to schlep my 78” level through the occupied and furnished house, as that doesn’t always end well…

I also used the Empire extendable level on a self-closing bathroom door, that wasn’t SUPPOSED to be a self-closing door. With the longer level extended against the length of the jamb, I discovered that it was bowed a bit out of plumb near the bottom. After performing some minor shim magic, the door now stays put.

One of the levels was also dispatched on a more mundane, but arguably much more critical, mission. My home honey-do list contained a “request” to hang a large picture in an upstairs bedroom. The picture was large enough to require two hooks, and the level made it easy-peasy to establish locations for the two hooks. Brownie points are extra-valuable in these times of enforced togetherness.

Let Me Just Plumb It Up…

Empire Levels was acquired by Milwaukee Tool about six years ago. Over the next few years, the number of products from the Blue division saw a huge boost. Among the innovative products in the lineup are the LED-illuminated Empire UltraView levels we reviewed a little while back. The introduction of these two extendable levels indicates the innovation will continue.

Clearly, Empire is serious about putting out a good variety of contractor-grade layout and measuring tools. The two Empire Extendable Levels are prime examples of this – they’re very well designed and made, they work exactly as advertised, and they are bound to make the workday easier for anyone who uses them.

The folks in Blue are obviously confident in the reliability and durability of their products. All eXT Empire Extendable Levels are backed by a Limited Lifetime Warranty on the frame and vials. If you want to reduce the number of levels YOU need to schlep around, make a B-line for your local Home Depot and see if Empire’s Blues can solve your leveling blues.