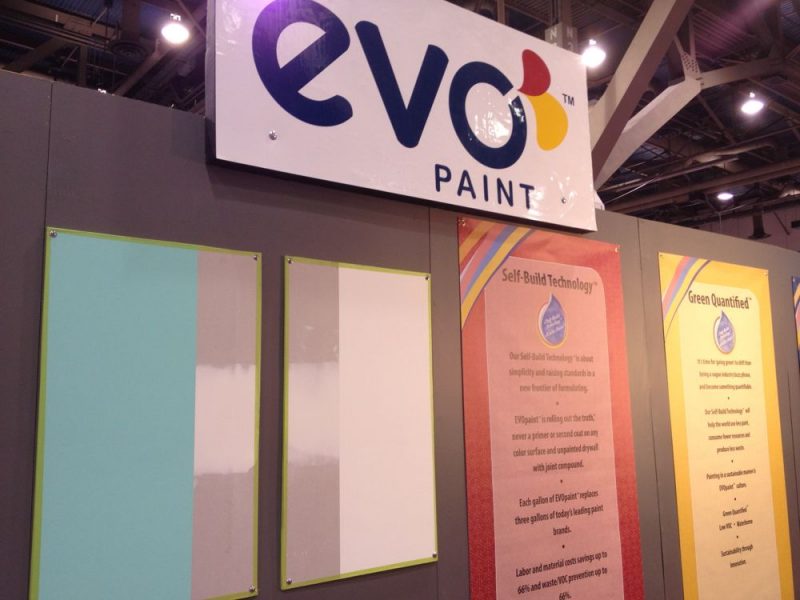 Aqueduct Paint Technologies Inc., (APT) recently announced EVOpaint™, which is being marketed as “the first and only ONE-COAT paint™.” A couple weeks ago, my eyes were starting to glaze over as I roamed the vast painting aisles of the 2012 National Hardware Show, something that’s known to happen after walking by one too many booths with more paint brushes on display. My disdain for painting is no secret, so anytime I spot something that might ease the pain of painting I get a little giddy. When I read the words “one coat” on the EVOpaint booth, I had to know more.

One of the reasons I find painting such a challenge is that it often takes several coats to achieve a great end result. First, the primer. Then a second coat. An eternity later, a third coat. Finally, if you choose colors like we did in our kitchen, you decide the first color was horrible and then apply another three coats of a new color. Yup, we really did that. Six coats does not make for an efficient project.

Tony Margani and another guy who painted a LOT of square tiles at NHS were kind enough to give us a quick video run-down on their EVOpaint technology:

APT has pioneered two formulas to service the global interior maintenance/retrofit and new construction markets respectively: EVOpaint™ Repaint™ and EVOpaint™ Drywall™. EVOpaint™ is about simplicity and raising standards in a new frontier of formulating space, instigating a fundamental shift in architectural coatings. EVOpaint ™ is ‘rolling out the truth™’, never a primer or second coat on any color surface and unpainted drywall with joint compound. Because incentive and reduction is built into our technology, the value proposition is significant. Through Self-Build Technology™ each gallon of EVOpaint™ replaces up to three gallons of today’s leading paint brand, delivering labor and material cost savings up to 66% and waste/voc prevention up to 66%. EVOpaint™ – NOT a paint and primer in one can.

I asked Tony about interior vs exterior applications and he clarified that for the time being, EVOpaint is for interior use only. That leaves us to hope a similar product will eventually make its way to market for exterior jobs, where a one-coat technology might be even more appreciated.

Normally, if a product isn’t on the market yet, we tend to shy away from it until we’re confident it really and truly is hitting the market. I checked in with EVOpaint this week and they reported that they plan to begin shipping in July. We’ll try to have them update us with availability (most likely in the comments below) as more detailed shipping and distribution information becomes available. Anticipated pricing is around $59 per gallon. If EVOpaint truly performs well, is durable, and lives up to its one coat claims, we think $59 is a small price to pay, especially when you factor in your time savings.