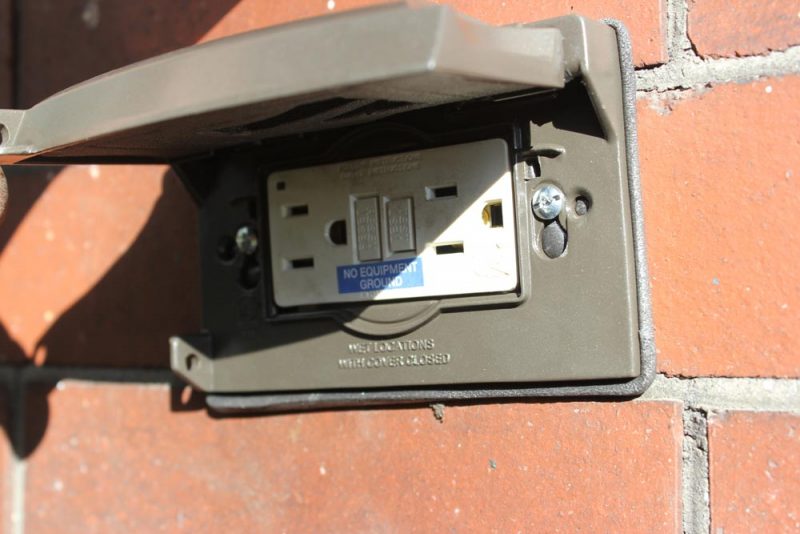 Living in an area with a lot of older homes, and being widely renowned for my vintage home repair expertise (if only in my own mind), I have ample opportunities to hone my character-rectification skills. Recently, I got a call from homeowners seeking advice on whether to repair or replace one of the three columns supporting their porch roof; the column had quite a bit of rot, and several floor-to-ceiling splits (that would be REPLACE). While there, my eagle eye, keenly attuned to potential safety and/or style discrepancies, noted two corroded, ungrounded, uncovered outlets, which had probably been installed in honor of Dwight D. Eisenhower’s inauguration.

For many years, the National Electrical Code has required GFCI (Ground Fault Circuit Interrupter) outlets in all damp locations: in kitchens and baths, basements if near a laundry sink, garages, and any outdoor location, such as a porch (“hang on while I kneel down on the stylish, damp outdoor carpeting to plug in these Christmas liiiiiiightsssss!!!”) Essentially, the GFCI outlet serves as an almost instantaneous disconnect to the power in the event there is leakage of current from the device you’re TRYING to power into something that doesn’t NEED to be powered, such as your arm (which is undoubtedly ALREADY incredibly powerful), thereby saving you from a painful, possibly fatal, jolt. Not a bad $12-15 investment. 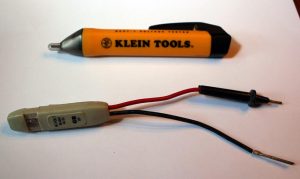 Replacing an old, ungrounded outlet with a GFCI outlet is pretty simple, and requires only a couple of screwdrivers, some wire cutters/strippers, a roll of electrical tape, a GFCI receptacle, and a circuit tester; a non-contact model ($15 or so) that beeps or chirps when startled by proximity to a “hot” conductor is easiest, but a $3 model with probes works well too.

The first step is to locate the breaker or fuse that controls that circuit, and cut the power by flipping the breaker off or completely removing the fuse. (To make things easier, mainly for me, I will refer to it as the “breaker”. Substitute “fuse” as necessary). If your breakers are labeled, congratulations—you are a member of an exclusive minority! More likely, they aren’t labeled, but fear not; there are several ways to determine which breaker controls the circuit. If you have a helper, you can plug in a lamp or radio and start flipping breakers off one at a time until your helper hollers to alert you to your success. (This method also provides a good opportunity to practice resetting the clocks on every electronic device in the house). If no helper is around, the same method works, but you must either turn the radio up REALLY LOUD, or voyage between the breaker box and the outlet after each new breaker is tried. A less aggravating, but more expensive option, is to use a circuit breaker finder.

With the power off, remove the old receptacle from the device box, and disconnect the wires; be careful, as the insulation on old wiring can be brittle. If there is only one set of wires (one black and one white) coming into the box, life is good: simply connect the black to the brass-colored terminal labeled “line” and the white to the silver “line” terminal on the GFCI receptacle, wrap some electrical tape around the edges of the device to cover the screws and help protect them from shorts, insert the device into the box, and screw it in place. Screw a cover plate over the outlet (if the box is outside, you’ll need a weather-proof cover for it – consult your local code), and affix a label to the receptacle stating “GFCI protected—No equipment ground.” (Note: if the wiring coming into the box has a ground wire, usually bare copper, simply connect it to the green “ground” screw on the receptacle, and eliminate the “no equipment ground” label.)

If there are two sets of wires coming into the box, separate all the wires after disconnecting them from the receptacle, making sure that none of them are touching anything else. Turn the power back on, and use your tester to see which set of wires is “hot” coming into the box. At this time you should also make a note of which other outlets on that circuit have no power; this means they will be downstream from the protected outlet. Shut the power to the circuit back off, connect the “hot” set of wires to the terminals marked “line” (black wire to brass terminal, white to silver). Next, connect the remaining set of wires to the “load” terminals in the same fashion. Be careful not to reverse these line and load connections, or the GFCI protection won’t function properly. Tape around the edges of the receptacle, install it in the box, install the cover on it, and label the GFCI and all down line receptacles with labels stating “GFCI protected—No equipment ground.” (These are normally provided with the GFCI receptacle). Finally, flip the breaker back on, use a plug-in outlet tester (some models have a GFCI test function) to verify it’s wired correctly and that the GFCI function works. Now you’re ready to party like it’s NOT 1949!