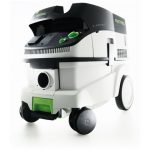 I have a bit of a reputation (well, actually several reputations, only one of which I’m discussing here). I have self-diagnosed myself as having mild OCD tendencies (OCD = Obsessive Compulsive Disorder). A more conventional way to put this would be “neat freak.” My nicer friends just call me “really well organized.” Luckily I married another neat freak, because if a neat freak gets stuck with a slob, that relationship usually results in some form of hell on earth. My wife and I just tend to harass each other about who is more of a neat freak. Since she’s not here to defend herself, she’s totally more of a neat freak! Anway, HomeFixated isn’t exactly a psychology or marriage therapy blog, so let’s get into what we’re here to review, the Festool CT 26 HEPA Dust Extractor.

The CT 26 is one of Festool’s newer dust extractors, and Festool sent us one to put through our OCD paces. A few design features and functions set the CT 26 apart from it’s competitors, and put it light-years ahead of basic shop-vacs.

I never realized how much I was missing this until I used it on the Festool CT 26. The hose on my other vac is usually finding it’s way across the shop floor like a snake that I will inevitably find a way to trip over. The hose garage makes my inner neat freak so happy! When you don’t need the tool, the hose coils up neatly in the “garage” on the top of the CT 26. Even if you are using the hose, you can often leave a good portion of it coiled so you don’t have a surplus of hose flopping around your work area. If you’re the Systainer type, the garage is also designed to allow for direct attachment, also known as the Sys-Dock. Neat Freak Bonus: Festool also thoughtfully added cut-outs for both the hose at the front and the power cable at the rear. 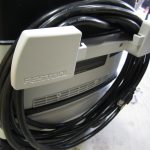 Sure, you could use the hose garage to be a cord garage too, but that’s just not acceptable to my inner neat freak. Even if you’re not a neat freak, having the cord get tangled with the hose just isn’t fun. Festool includes a bracket that mounts to the back of the CT 26 with two included screws. The bracket then provides a tidy home for your coiled, industrial strength power cord. If you can handle the hose and power cable fraternizing with one another in the “garage” on top, leaving the cable bracket off the back means the CT 26 takes up a little less space.

Wheels or not, there are plenty of times you’re going to need to pick up your beloved dust collecting droid and get mobile. I won’t name names, but a dust collector I own from an otherwise great German company that really likes the color orange has a really horrid handle. It’s smooth plastic on top (where you don’t actually experience any pressure) and then slits of thin plastic on the bottom (which then become a hand-torture device if you’re carrying the full vacuum down a flight of stairs). I am happy to report Festool’s carry handle is designed to be comfortable during transport, rather than slice into the nerves of your hands. It’s smooth and ergonomic, you know, the way a handle should be.

The Internet is filled with rumors of workshops detonating with a static/dust city-flattening explosion that results in a mushroom cloud. I don’t know anyone that actually has firsthand knowledge of this kind of apocalyptic static-ignited dust bomb (maybe because they got nuked), but at minimum, debris running through hoses and ducts can cause static build-up and shocks. But not with the CT 26, it’s built with a full-unit antistatic design. Neat Freak Bonus: By avoiding static, the CT 26’s 11.5′ hose stays clean. Other vacs’ hoses tends to become a magic wand for attracting dust exactly where you don’t want it: on the outside of the hose. As a side benefit, the inside of the hose is less apt to get clogged due to material clinging to the sides of the hose too. Another side benefit: no mushroom cloud. 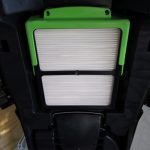 I never thought I’d say this, but Festool’s HEPA filter ($60) is actually substantially cheaper than the $100 filter on my tactfully unnamed orange vacuum. It’s very easy to change thanks to its dedicated home on the bottom of the unit. Neat Freak Bonus: Your lungs will stay way more clean and tidy with HEPA filtration!

Self-Cleaning Filter Bags
OK, so the bags don’t sprout legs, walk to your trash and dump themselves out. Short of that miracle, they’re probably the next best thing:

If you’ve used other dust extractors, you may have experienced the issue of fine dust particles becoming caked to the inner lining of the vacuum bag. Festool has solved this problem by creating a filter bag from a fleece material that is designed to collapse and expand as the power is cycled on the dust extractor. This causes the dust cake to break up and disperse to the bottom of the bag. The advantage is that there is no loss of suction as the bag fills up, which is the case with other manufacturer’s models. Clogging of the filter bag can also create unnecessary strain on the motor and lead to premature failure, a costly repair or replacement. 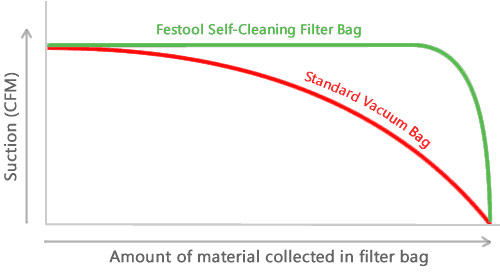 Fine, Festool doesn’t actually call it that. . . they go by “adjustable suction.” I prefer Adjust-A-Suck. As you can imagine, this handy dial on the front of the CT 26 lets you go from gentle suction to vigorous. Why would you want gentle suction? That’s kind of a personal question, but one reason is to prevent high suction from gluing your sander to the work surface it’s trying to glide over. On the other hand, your router might demand full throttle suction to get all those pesky wood chips.

This is a feature I have on that “other” orange vac we use, and I absolutely love it! The manual lists a 3.7 amp max for the accessory (the tool itself gives a 3.1 amp max warning), so I resisted the temptation to plug the Bosch Axial Glide 12″ Miter Saw directly into the CT 26 Dust Extractor. For tools like sanders on jobs with lots of stops and starts, this feature is awesome. Festool also wisely went with a simple dial selector (it’s either off, on or on automatic). The other vac has a dual switch arrangement that turns into a haphazard switch-flipping contest at times. If you haven’t used something like a sander/vac combo with the auto-start for the dust collection, you’ll be converted the first time you try it.

Water Level Sensor
We didn’t get into vacuuming up all the beer we spilled at the last family kegger, but if you have that need, you’ll be relieved to know an integrated water level detector and auto shut-off prevent you from killing your spendy new dust extractor because you thought it came with SCUBA gear. The motor housing is also sealed and the lid is gasketed (I made that word up, but you know what I mean).

Aside from all the neat freak bliss mentioned above, we found some minor issues that didn’t totally blow us away, (don’t worry, we’ll resist the temptation to exaggerate and say they sucked just for the cheap pun):

1) We would have liked to see Festool include their Suction Brush ($12 accessory), Universal Brush Nozzle ($14 accessory) or CT Cleaning Accessory kit (3 attachments – $11) with the system. It’s not that the brushes are hugely expensive, they’re just more of a pain to buy separately when people might assume they’re included (in case you didn’t guess, they’re not). The dust extractor is very likely to be used to vacuum off tools, work surfaces, etc. and including a basic accessory or two makes sense to us on a $550 tool.

2) Sound levels were a bit higher than we expected. Festool rates the tool at 62-72db (the range is on account of the variable speed). We tested the CT 26 at a four foot distance and found readings between 66-75db. The discrepancy likely stems from Festool having a fancier sound level meter and different testing procedures, but we found the CT 26 slightly louder than our orange vac. However, if you’re accustomed to the unbearable screech of most shop vacs / pulsejet rockets, then you’ll find the Festool CT 26 a welcome sonic reprieve. 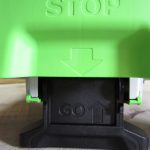 3) The brake mechanism on the CT 26 is a little funky, and we’re still trying to figure out if we like it. The best way to describe its function might be to think of it as a motorcycle kickstand. A brake “button” on the front of the unit deploys the brake below the CT 26, but you actually need to rock the unit forward to lift the front wheels off the ground. To me, a foot activated lever that locks/unlocks the rear wheels might make more sense. 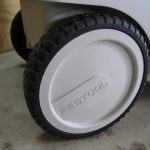 4) The plastic wheels on the CT 26 struck us as particularly. . . .plastic. We expected somewhat beefier rubber-treaded wheels, but instead found an all plastic design. Maybe Festool chose plastic to reduce how much debris the wheels pick up? Not a big deal in terms of function unless you’re planning to race your CT 26 around the shop, in which case you may want to pimp your CT a bit with some rubber wheels (and spinners of course).

5) With the relatively small diameter of the hose inlet (1-1/16″), you’ll likely be inserting the hose into some dust collection ports (rather than around the ports). The hose end is a thick rubber material, and that thickness gives dust a bit of a foothold to bind on. The larger diameter of some other vacs/dust collectors give you the ability to go around the tool’s dust port with the hose end, which means there isn’t a lip to obstruct flow into the hose. We didn’t run into any noticeable performance issues with this, but it’s something to be aware of depending on what you plan to hook your dust collector up to (and what kind of debris will be flowing through it).

Those minor issues aside, we also found a lot of little details we liked, including a ridiculously beefy power cable/plug, two easy paddle latches to access the main compartment, easy on-off friction fit for the main hose connection, and generally lots of attention to detail in design and function. There are also a myriad of Festool accessories available for the CT26 including the Festool Workcenter WCR 1000 shown here:

Even without any accessories, the CT 26 will likely be a popular item around any shop or garage (but especially so in neat freak shops and garages). You can find the Festool CT 26 HEPA Dust Collector for $550 from our sponsor Rockler.