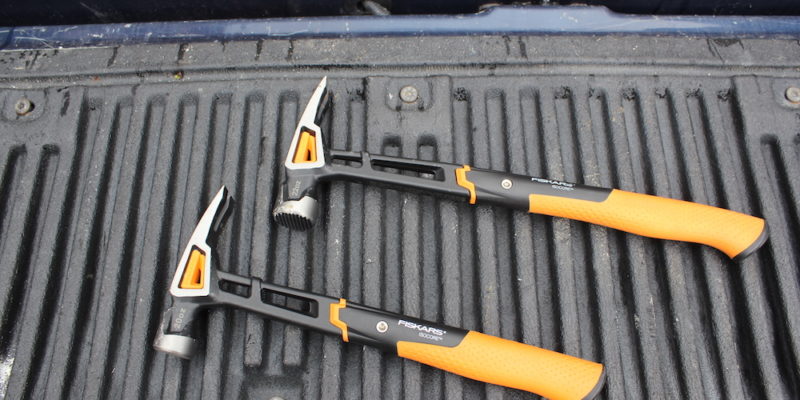 Quick – when you hear the name Fiskars, what’s the first thing you think of? For me, it’s pruning shears and scissors. And the color orange. The orange part still applies, but their offerings have expanded far beyond scissors and pruners. In addition to an extensive line of gardening tools and crafting supplies, Fiskars offers an assortment of hammers, ranging from a 16 oz. finishing hammer to a 10 lb. sledgehammer. In an effort to spread some good vibes, they gave us a whack at a couple of their new Fiskars IsoCore hammers.

One of the Fiskars IsoCore hammers we received was their 22-oz. framing hammer. With a total length of 16” and an aggressive milled face, this hammer is aimed specifically at framers. You won’t find any finish carpenters using a milled face hammer. Hopefully.

The second hammer is a general-purpose 20-oz. hammer. With a smooth face and a total length of 13-1/2”, it’s intended to be a good all-around hammer. Its head weight of 20 oz. means it still has plenty of oomph to bury sinkers when necessary.

So what the heck is Fiskars IsoCore, and what’s in it for you? The focus in hammer technology seems to be on shock and vibration reduction. As an example, the tag line for the lineup of Fiskars IsoCore hammers is “Less shock. More awe.” Swinging a hammer all day IS tough on the wrist and forearm; ask anyone who does it. The Fiskars hammers use a dual-layer handle and an insulating sleeve to dampen and isolate the vibration, so less of it travels up the handle and into your hand. Here’s a short explanatory video from Fiskars, followed by a full list of features:

Most of the major hammer makers tout some sort of vibration reduction. Stanley FatMax Anti-Vibe, Hart SureGrip anti-vibration overmold, the recently-reviewed Milwaukee framing hammer with ShockShield…most hammer manufacturers tout either a vibration-reducing grip, shaft, or both. Many of them claim to reduce shock and/or vibration by various percentages, but they often don’t say in comparison to what, and when they do, it’s a different comparison from the next brand, so it makes it tough to compare head to head, so to speak.

For example, when checking the asterisk on the Fiskars claim of 4X reduction, it’s “when compared to wood handles.” For the Milwaukee hammer, the claim was up to 10X less peak vibration than its competitors. DeWalt claims its Carbon Fiber Composite Hammer Tacker reduces vibration levels by 45% and muscle exertion by 25%, but I couldn’t find an explanation for their asterisks. Bottom line: it’s confusing. Researchers from the University of Wisconsin did some testing on the Fiskars IsoCore hammers. Maybe we can convince them to gather up EVERYBODY’s hammers, and test them all the same way!

A Closer Look At The Fiskars IsoCore Hammers

Since we have not yet constructed a state-of-the-art test facility, let me offer my impressions of the Fiskars IsoCore hammers, based on some real-world usage and a limited head-to-head test against a couple of other hammers.

My first thought? They’ll be easy to find when I drop them in the snow! When I first picked them up, I immediately noticed how soft and comfortable the handles were, especially in comparison with my decades-old Estwing framing hammer. The handles are very soft and cushy, with a good, tacky grip.

The next thing I noticed was the sporty cutout design of the upper handle, and the head. There’s an orange rubber insert in the center of the head, which is a dampening insert to cut down on the ringing. While doing that, it also takes away an alternate smacking surface. Not a huge deal; it’s just that once in a while it’s easier to maneuver the hammer in and give something a whack with the side of the head, and this takes away that option. It also means there’s no side nail puller built in, which is also not a huge deal, to me anyway.

One feature that’s a must-have on any new hammer is a magnetic nail starter. This lets you stick a nail into the slot on top of the hammer, and give it a good starting whack, using only one hand. This is great for tight spaces – and for saving your fingers, for those of us with less-than-perfect aim. The nail starters on both Fiskars IsoCore hammers worked well, although the magnets could be a bit more powerful. Both hammers feature a straight claw, which is what I prefer for nail pulling, prying, and occasional demo.

I used both Fiskars IsoCore hammers on a variety of projects, over several months. The first outing for the framing hammer was to do a temporary stair repair, replacing a missing tread leading to a second-story deck at a rental property. Not sure where the original tread went; someone apparently needed a sturdy shelf, or some firewood…In any event, I placed a nail in the slot, gave it a good whack, and in a minute or so the new tread was securely in place. At least until someone needs another shelf.

One thing to note: The hammers have a protective anti-rust coating, and look pretty sharp when they’re new. After the first use, the framing hammer had some pretty good scratches and chips in the coating. I don’t really care if it isn’t pretty; it’s a hammer, after all. I just hope that doesn’t mean there will be rust issues down the road.

While the 22-ounce framing hammer definitely had a bit more sinking power, the 20-ouncer held its own. It would also be the hammer of choice for any trim or finish work, since its smooth face does far less damage than the milled face on the framing hammer.

As I mentioned, we lack the sophisticated equipment needed to scientifically evaluate various claims of reduced shock and vibration. In an effort to get at least some idea whether there was anything to the claims, I did a limited, admittedly subjective, comparison among three hammers. I pitted the Fiskars IsoCore 22-oz. hammer against the Milwaukee 22-oz. framing hammer with ShockShield and my 40+ year old Estwing 22-ouncer, which, while it has absolutely no vibration or shock-reduction technology, is still a damn good hammer.

My test involved sinking about fifty 16D and 20D sinkers into tripled-up 2x4s. I switched hammers after every few nails. The result? After banging in a bunch of nails, I could definitely feel a difference when using the old Estwing vs. the other two hammers. I’m apparently developing some carpal tunnel issues, and I could feel pain in my wrist and lower forearm after using the Estwing.

The added cushioning and vibration reduction technology in the Fiskars and Milwaukee hammers really did seem to make a difference in the amount of shock transmitted to my arm. Having said that, I couldn’t really tell any difference between the 4X claim of the Fiskars IsoCore and the 10X claimed by the Milwaukee ShockShield. It seems there really is some benefit to having some sort of shock and vibration reduction, though, and I’m all for anything that reduces the wear and tear on what’s left of my muscles and joints.

Want To Score An IsoCore?

I like the Fiskars IsoCore hammers we tried out. They seem very well made, they’re very comfortable to hold and use, and the shock and vibration reduction technology really does seem to help. The main drawback? Nobody seems to stock them; there are several online sources, including directly from Fiskars (where they tend to be pricier), but I can’t find any stores that carry them. When I buy a hammer, I really like to feel its heft first, and give it several swings. What feels like a perfect fit to one user may be totally unacceptable to another.

If you like to try before you buy, you could check with Ace Hardware; the stores in our area can get the hammers in within 1-7 days. Just make sure that if you don’t like it, they won’t charge you a re-stocking fee. The entire lineup of Fiskars IsoCore hammers is backed by a full lifetime warranty. Track one down, and give it a whack.

Buy the 22-oz. framing hammer from Ace Hardware for around $40:

Buy the 20 oz. general use hammer from Amazon for around $37: