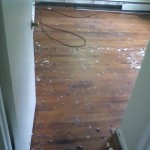 Recently, I refinished the hardwood floors for a friend of mine. The refinish included three bedrooms, dining room, living room, and hall.  It was a big job. It would have been easier if the hardwood floors hadn’t been previously carpeted and the previous renters’ dogs had been house broken… Every room that had been carpeted had enormous ‘pet’ stains in them.  It was bad.  Then there were the 12,324 staples I had to remove (which in some cases were rusted).  After the staples, I had to deal with the stains and warping.

Unfortunately, a simple sand and refinish were not in the stars for these floors. I had to dig deep. Not only did I have to sand the floors level but strip all the finish off so I could stain this monstrosity a dark color. Honey oak was definitely not an option. Ideally for my back, life, and wife, carpet throughout the house would have been the best – but for my ‘buddy’ it we had to factor in the chance that future renters would have more barking urinators, so carpeting was out.

I decided to get my supplies from, well, a large chain store because it was within practical walking distance from the work site (apparently I can heed my own advice).  I knew it would be a mistake, but I tried to settle for convenience. So with that I rented the Varathane floor sander – a three disc oscillating sander.

To start with, it weighed as much as two camels and pygmy goat. I could count the future LeRoy-years dwindling as I wrangled it to and from my truck.  I broke both my collapsible saw horses to boot. Once I got rolling, things didn’t get much better. It seemed I was changing paper every time I made a pass, and at $5 a set of paper it adds up quickly. Apparently, the wax on and wax off motion doesn’t do much for hardwood floors. And everything that I read says you’re not to leave it still to avoid gouging. However, after the initial sanding I realized that I could have eaten lunch and watched the CSI marathon while the thing ran in one place, and the floors would have been fine.

After two days of a wonderful Memorial Weekend that I’ll never get back, I gave up hope on the Varathane Floor Sander and decided to try something different. 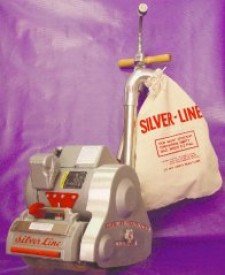 So, I broke down and went to the local tool rental place where not only did they have an abundance of sand paper, but they gave me more instructions than the wind-and-a-prayer that the other place did. Plus the Silver Line floor sander weighed substantially less, maybe just one camel and a normal sized goat.

Have you ever heard someone say after you opened something tough, “well I loosened it for you!”?  This was the floor sanding equivalent. I nearly had to run to keep up with the Drum style Silver Line. While it cost about twice as much as the Varathane to rent, I used less paper and completed the entire floor down to the bare wood in less time. Usain Bolt would have been impressed.