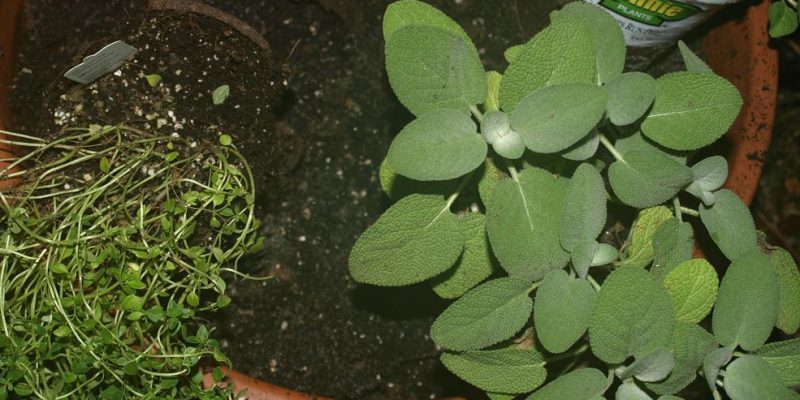 Ask any chef and chances are herbs are an important component of their culinary escapades. Although you can go the boring route of buying jars of herbs, there is something extra rewarding and extra tasty about using herbs you grow yourself. You don’t even have to be a green thumb to create your own herb container garden. If you feel the need to add some herbs to your kitchen garden, why not try filling a planter with them in the near future? We’ll even show you how.

Since they’re going to be living together, you’ll want to select varieties that are going to get along. Picking herbs with similar light and water requirements is the best way to do this. Keep in mind, some plants, such as mints, don’t always play nicely with others. I personally went with Mediterranean species that do well here in the summer. The ones I used are Italian oregano, Hot and Spicy oregano, common sage, and lemon thyme.

I got these plants at Lowes for about $3.75 apiece. If you’re willing to wait until later in the summer, the leftover herbs tend to go on sale for closer to $2.50 each. However, they’re usually pretty picked over by that point. Local nurseries might also be a good place to look for varieties to fill your herb container garden. You need to know what you’re looking for (perennials that are in good shape) to make the most of the situation.

The container in question should be big enough to hold 3 to 4 plants. It should also have some room for them to grow a bit. You should ideally select herbs that will stay small for a least a season but I fudged a bit with the sage plant. It would probably be a good idea to get a larger container than the one I used if you plan on going with bigger herbs like rosemary or lavender. You could even use 1 or 2 less plants as well to ensure that they’ll all fit.

The container in question can be bought at the garden center or reused from your own yard. As long as it has a drainage hole, you’re fine. The pot I’m using in the pictures is sold as an ‘azalea pot’ and new ones cost about $15. I had a number of plastic planters that I could have used instead but since I chose to go with herbs that don’t like especially moist soil conditions, I opted for a terracotta planter to keep them happy.

Unless you have a empty container full of potting soil floating around your yard, you’ll probably need more of it for this project. Contrary to popular opinion, recycling your potting soil can be okay. But this is only true if the former occupant died of something like an encounter with Jack Frost instead of disease or pest problems. Even so, it’s always a good idea to use fresh dirt where possible.

I personally like to use washed playground sand as a topper for Mediterranean herbs because it improves drainage and helps prevent stem rot. Unfortunately, I didn’t have any on hand. I did have some leftover rocks from a previous project so that’s what I used. This also helps prevent your soil from drying out quickly.

You may need scissors to cut the herbs free of their original containers like I did. 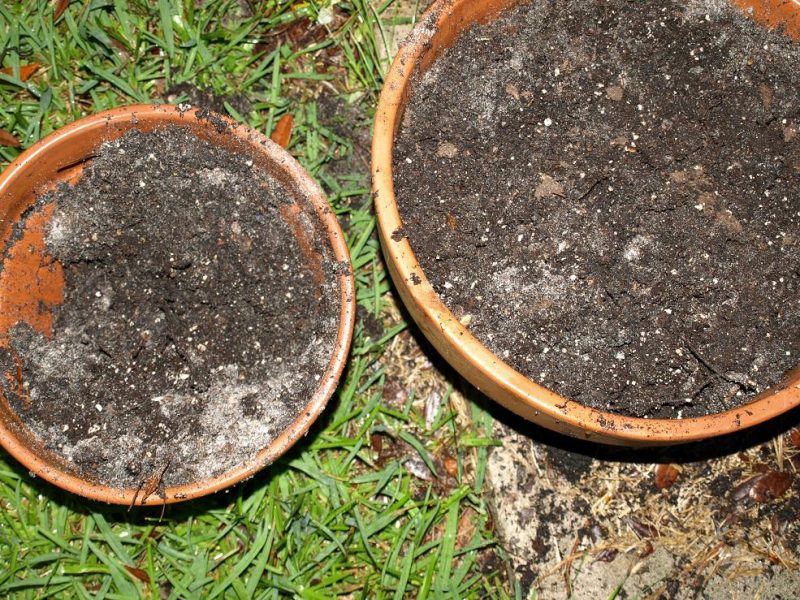 1. Clean out your container if you need to do so. After all, slightly grimy pots can easily be restored to their former glory with a little bit of soap and some scrubbing. If you’re worried that the pot in question might have contained a sick plant at some point, don’t skip this step. I typically scrub the containers with a hydrogen peroxide/water mixture to clear out any lingering problems. If the fumes don’t make you sick, a mild bleach and water solution also works great as a disinfectant.  In any case, you’ll want to let the containers dry out a bit before you put new plants in them.

2. Line up all your supplies and make sure you have everything you’re going to need in one place. This keeps you from having to dart around the yard trying to find missing items. It also keeps you from getting distracted by going off in search of something but that might just be my A.D.D. talking. 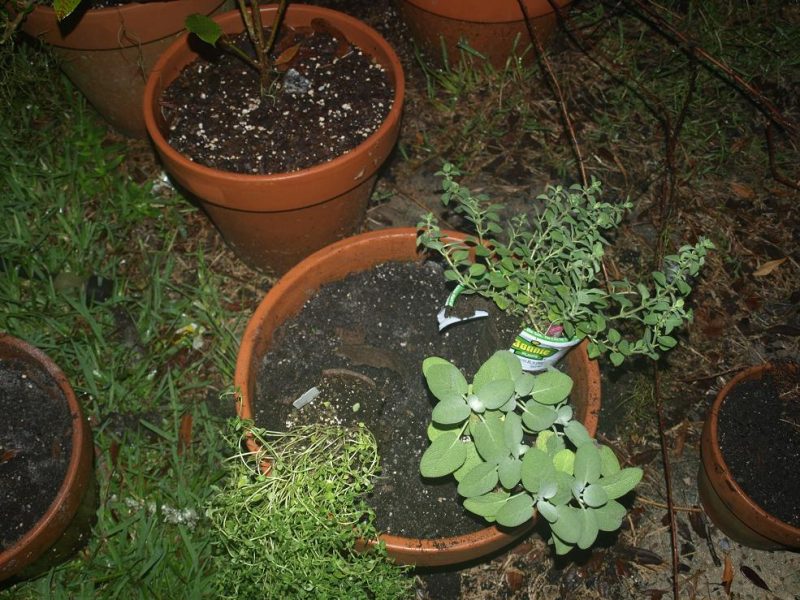 3. Pour in the dirt until you can sit the plants on top of it so that they’re slightly below the level of the rim. Gently take them out of their containers and squish the roots apart a little so that the plants are no longer pot shaped. Place them where you want them. If they’re no longer sitting level with the top of the container, add a little dirt under them so that they are. Then fill the rest of the planter with potting soil until it’s just below the rim. Lightly pack in the dirt. Water the plants until liquid comes out the drainage hole. Add more dirt if necessary.

4. Top dress your creation with sand, broken pot pieces, or rocks if you like. Then place the container in an appropriate spot, sun for sun plants or shade for shade plants, in case that wasn’t obvious! Just be sure the container remains only a few steps away from your kitchen door so that you can pop out and grab a handful of culinary herbs whenever the mood strikes you. 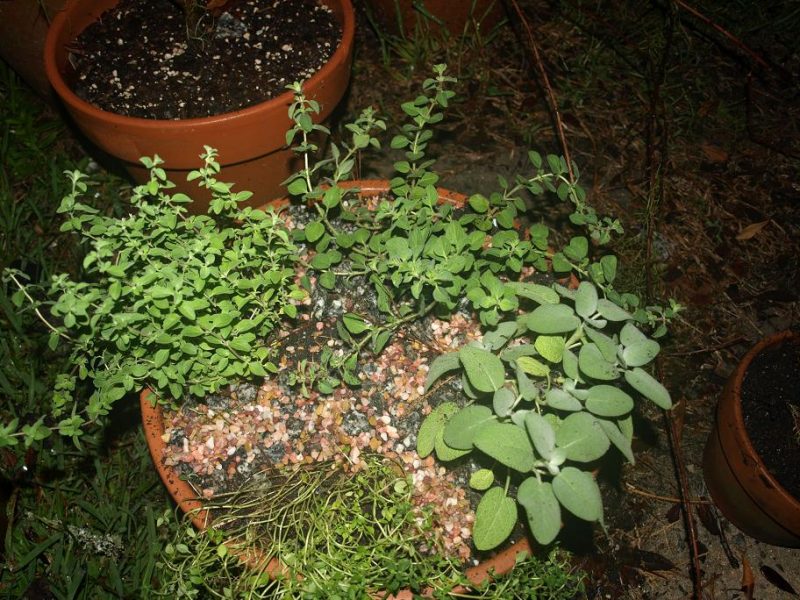 Most herbs, including the ones shown here, will eventually have to be transplanted into bigger and probably separate containers. This is why I’m always surprised that a lot of garden magazines try to convince their readers to cram a whole bunch of plants into one tiny pot without pointing out that they won’t be happy with this arrangement indefinitely. Plants are a lot like people in that respect. If they stay out of each other’s space and respect each other’s boundaries, they can live happily together a whole lot longer than ones that encroach on their neighbor’s turf. Even so, don’t plan on leaving the container exactly like this for more than a season or two. Plan on taking one or two herbs out to be repotted in the near future to keep them healthy.

For more tips on herb options, check out our guide to basic culinary herbs.

And, as always, happy (herb) gardening!