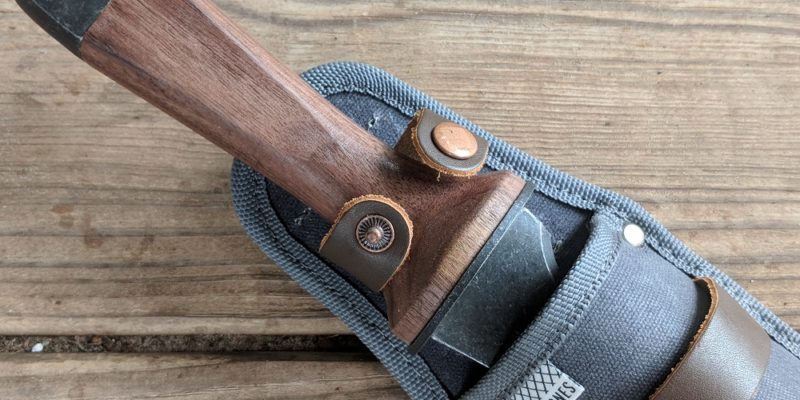 As is the case with most gardeners, I love trying out new, multi-purpose tools. So when Home Fixated was contacted by The Grommet and asked if one of us would like to try out their Hori Hori garden tool, I happily jumped on their offer. The product arrived quickly and I wasted no time and putting it through its paces in my yard and garden.

Since it’s much nicer than your average garden tool, the Hori Hori would make a wonderful Christmas or birthday gift for any gardeners in your life. As long as they’re sane and not prone to criminal behavior, of course. It could definitely double as a deadly weapon. Or if you’re my size, a hobbit-sized sword! Just to be clear, despite its somewhat menacing appearance, we ARE NOT recommending using the Hori Hori as a weapon, OK?! Garden use only!

The product comes nicely packaged, ready to wrap if it’s being given as a gift. Also, be careful with the Hori Hori when you’re removing it from its sheath, because it is really sharp.

I thought the Hori Hori was going to be much smaller than it actually is. The picture I had seen also shows it as having a flat top. However, the one I received was pointy at the end and the blade itself measured about 7 inches long. For someone like me, a tinier model would be nice and possibly more manageable. But I’m a very small human being, so your own mileage may vary on that score.

As you can see in the photos, the Hori Hori is comparable in size to a US Army machete and it also has a long, sharp side. It even has a clip so you can attach it to your belt and easily carry it around with you while you work.

Since I had some okra to harvest from my raised garden bed, I decided to make that my first test. As it turns out, the flat side is a bit too sharp and unwieldy to use on stuff that’s growing so close together. I accidentally sliced through both the okra and one of the (twig-like) branches on the plant. I had much better results using the serrated edge and using my hand to pull the part I wanted to cut off against the teeth.

The instruction say to clean off the product and wipe it down with oil after every use. I didn’t have that on hand so I simply used a paper towel to clean it off before putting it away. Although the company doesn’t specify, this apparently means to clean it with linseed and motor oils, not olive oil or canola like I previously thought. (I guess you can tell I do a lot of cooking in my spare time.)

The advertisement mentions that the Hori Hori has inch markings on the back that can be used to measure planting depth. As seen in the picture, these markings are indeed about an inch apart, except for the last one, which is more like 1.5 inches from the handle. From what I can tell, they’re fairly accurate. On the other hand, it was tough to hold the measuring tape steady with one hand and adjust the camera shot with the other, so the photos shown here do look a little off.

I think that the Hori Hori would be a great device for planting bulbs and small to midsize plants, especially since it has a grooved back that could easily double as a trowel. However, this tool would probably not be useful for figuring out how deep to plant seeds because their planting depths are usually given in mere fractions of an inch. You could nonetheless use it to dig a small trench for planting seeds or to smooth the soil over them after the fact.

The third claim in the advertisement is that the Hori Hori is useful for trimming branches. To test this out, I used it to remove some branches from the cottonwood tree in my yard. For reference, the living limbs on these trees are pretty lightweight. They’re also not very thick.

A significant whack with the at the joint between the trunk and limb caused smaller limbs (less than 1 inch in diameter) to fall off. With larger branches, a little sawing did the trick. The hooked or notched feature is also good for removing thinner pieces, like the bug eaten portions of my lemon tree.

For medium to huge branches, particularly on hardwood trees, you may actually need a chainsaw or more robust pruning saw. But the Hori Hori is nonetheless a fine tool for cutting off twigs to medium size limbs. It can also double as a package opener! I found this out earlier as well.

After a few tests, I found that this multipurpose device is indeed an acceptable tool for helping pound stakes or trellises into the dirt. The end of the Hori Hori is tipped with a metal piece that withstands this motion fairly well. The product also has a good heft, which helps drive the item in question further into the soil.

However, I noticed that the wooden portion of the handle did get a bit nicked up when I wasn’t careful with my swings. So this device may start to show some wear if constantly used for this purpose. But it’s a gardening tool! The only ones that remain in pristine condition are the ones that aren’t used, and what good would that be?

The only advertised use that I didn’t test out was whittling. I don’t have that particular skill and I’m a klutz of the highest order. So let’s not talk about what a hospital visit might do to my finances. Besides, this product was designed for someone with larger hands. I personally would need a much smaller blade for that. After all, I regularly chop vegetables with a paring knife because normal knives are too unwieldy.

The Hori Hori is a nicely packaged, fairly well-made, multi-purpose product. It would make a great holiday gift if you’re already thinking that far ahead. To buy your own, shop here:

Buy Now - via The Grommet