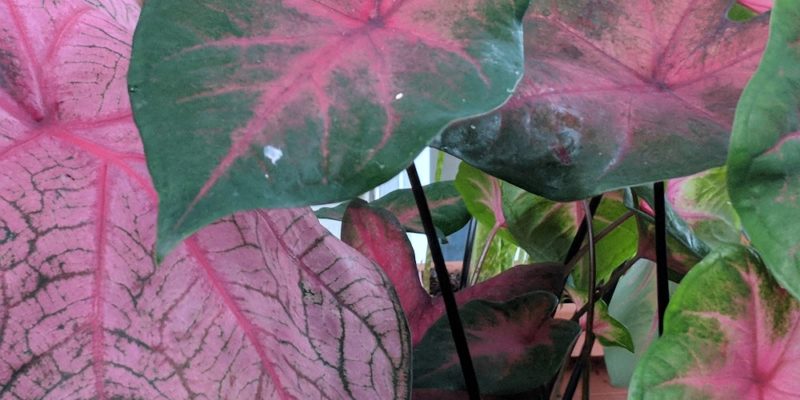 According to the all-knowing geniuses at Wikipedia, caladiums are a genus of plants that are native to parts of South and Central America. They have also naturalized in a variety of tropical locations throughout the world. However, most North Americans are probably familiar with caladiums as being those decorative, leafy plants that show up in their local garden centers and in various other spots over the summer months. That’s no doubt because caladiums are really easy to grow, right? They are if you read on for more details on how to grow caladiums.

How to Grow Caladiums – The Basics

In recent years, I’ve bought caladiums as dormant tubers from a local garden center for about $1 each, which seems to be the best deal around. Of course, packages of tubers can also be bought at ordinary stores like Lowe’s and Walmart. There are even plenty of websites that sell caladiums. But, with shipping costs being as high as they are, this is probably the most expensive option available.

Caladiums are even sold as plants in some places. No worries! They are very easy to transplant. I know this because I had one that was carrying on a rather sordid affair with the pineapple plant that had to be broken up for the good of all parties involved. But they are both quite happy these days…

Although there are some newer versions that can handle a couple hours of full sun, most varieties of caladiums will be at their best in a shaded environment. Mine are currently flourishing in an area that is mostly shaded but does get some dappled sunlight in the afternoons.

Gardeners should also be aware that planting caladiums too early in the year may cause them to rot. These plants should only be placed outside when night temperatures are reliably in the 50s. Over-watering them can cause the same problem. However, caladiums do like moist soil. Mine are all very happy in 10 inch plastic pots, which helps hold the moisture in as long as the temperatures haven’t climbed into the triple digits.

If you’re dealing with tubers, all you have to do is fill up the container you’ve selected with standard potting soil, stopping a few inches below the rim. Or you can dig a trench a few inches deep in a shaded spot if you plan on growing the plants in the ground. Then arrange the tubers, with any sprouted ends pointing upward. Make sure that you space the plants at least a few inches apart. Cover them with the remaining inches of dirt. Finally, water the tubers until liquid runs out of the pot or the ground becomes thoroughly soaked. Add more soil to cover the plants up if they become exposed while you’re watering them. Then be sure to water them on a regular basis for the rest of the growing season. That’s really all there is to it.

Gardeners who live in zones 9 to 11 can leave their plants outside in the winter. Caladiums may also come back in zone 8, if the winter temperatures don’t get too cold. Individuals in fringe zones who don’t want to risk losing their plants can still wait until their leaves change colors to dig them up. However, gardeners in other areas will need to put up their caladiums before their area’s first frost to keep from losing them. Gardeners should store the tubers in a cool, dark place that’s around 50 to 60 degrees, such as an indoor closet or heated garage, until the weather warms back up enough to replant them.

Although bugs may take the occasional nibble here and there, caladiums don’t seem to attract hungry insects like other garden plants do. The squirrels also seem to leave them alone. However, I found out this year that caladiums do not play nicely with other plants. In this instance, sunflowers and nasturtiums. My goal had been to plant a sunflower in the center of the pot, which would hypothetically outgrow the caladiums before they made their appearance. Or so I thought. What I didn’t realize was that caladiums have a take no prisoners approach to container life.

Another extremely obvious problem in this scenario was that sunflowers need sun and caladiums generally need shade.  I didn’t realize the latter until a few months into the project. Needless to say, it was not a match made in heaven. The sunflowers did survive, but both of them turned out puny and warped. They ended up growing sideways to stick out from under the pile of caladiums. The nasturtiums all died because they were quickly smothered by the bad company that they had accidentally been forced to endure. So now you know, don’t try this at home. Well, try growing caladiums, just don’t do anything crazy with them! Good luck and happy gardening!