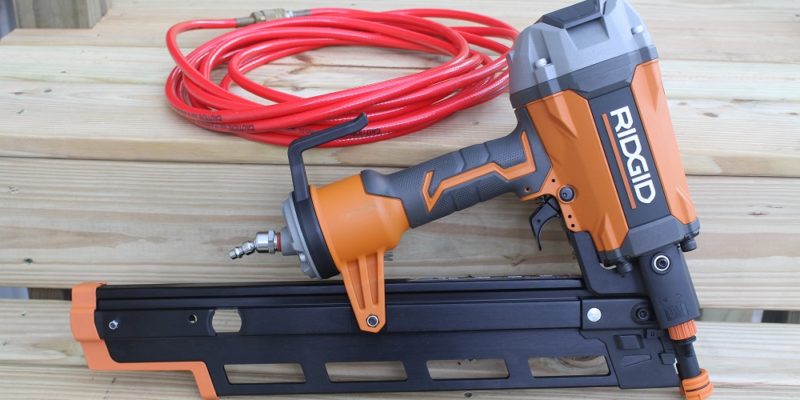 This post is sponsored by The Home Depot. If you’re a veteran construction framer with the forearms of Popeye and the shoulders of a pit bull on steroids, feel free to keep swinging that 28 oz. hammer every day if you really insist. But the mere mortals among us will appreciate the tireless driving power of the Ridgid R350RHF pneumatic framing nailer. This nail biting monster can sink up to eight 2” to 3-1/2” nails per second, showing your crew’s biggest pythons there’s a new hotshot in town! He dresses in safety orange and gray and never takes a break. You hiring?

I’ve Been Framed – And I’m OK With That

I’m no construction worker, but I’ve built my fair share of woodworking and electronics workbenches, utility shelves, walls, seesaws, porches, ramps and other projects requiring lots of nails and hammer swinging. And let me tell you, after pounding a few dozen, I feel like I’m the one who’s been hammered.

My arms more closely resemble Olive Oyl’s than those of Popeye. I have several nail-intensive projects coming up, so when The Home Depot sent the R350RHF our way, I was anxious to find out how much easier my life would become.

Before we dive in, here’s the lowdown on the hoedown that is the Ridgid R350RHF 3-1/2” round head framing nailer:

* Muffled exhaust directs air away from the user.

Loading is incredibly simple: slip a strip of nails into the magazine then slide the pusher out to the end. For safety’s sake, before loading, make sure to connect your pressurized air supply.

The pusher and magazine have releases so you can remove the remaining nails when you’re done.

The Ridgid R350RHF Framing Nailer has two different firing modes: Sequential trigger and bump trigger. In sequential mode, the business end of the tool must be pressed against your workpiece before you squeeze the trigger.

In bump mode (also called “contact actuation mode”), you can hold the trigger then tap the gun’s barrel against your workpiece for rapid fire action. Many framing nailers can shoot around 3 nails a second, but this one has a “best-in-class” 8 nails per second firing rate! Think Rambo, but without all the carnage and funny accents. Frankly, I think you’d be hard-pressed to fire nails that rapidly with any degree of accuracy.

No-Mar Pad Or Claws To The Wall? – The Choice Is Yours

Depending on your application, you can use the nailer with or without the no-mar tip. I left it on most of the time. I did find it tricky to put back on, but it got easier with practice.

When you need to nail at an angle – for example, toe nailing studs to the top and bottom plates – removing the pad to expose the pointy claws makes a huge difference. The points prevent the tool from slipping and possibly causing a glancing blow or dangerous ricochet.

A Variety Of Nails To Suit Your Application

The Ridgid R350RHF framing nailer works with 21° plastic collated, full round headed nails ranging from 2” to 3-1/2” in length, with shank diameters from 0.113” to 0.148”. Shank configurations include smooth – for basic framing applications – and ring and screw (twisted), for better and “even better-er” holding power, respectively.

During my evaluation, I used the following nails:

Both nails worked perfectly every time. So far, I’ve fired a couple hundred of each with no misfires, jams or bent nails.

To dial in how deep the nails were driven, I started with my compressor’s output at about 105 – 110 psi and tweaked the tool’s depth-of-drive adjustment. Of course, larger nails will require more of a wallop (and shorter nails, less). So you may need to bump the compressor up a bit if you’re using nails over 3”. The Ridgid R350RHF is rated for 70 psi to a maximum of 120 psi.

Clear Out The Jam. Clear It Out. While Your Feet Are Stompin’ And The Jam Is Pumpin’.

I had no jam issues. But it’s inevitable that one will occur at some point in time. And when it does, I’m prepared to throw a hissy fit as I search for the lost tool that opens… oh wait, the R350RHF has a tool-less jam clearing mechanism. Never mind!

Just be sure to disconnect the air supply – and any other Australian soft rock duos you may have hooked up – before fooling around near the barrel. This can be a dangerous tool if you’re careless. Check out more safety tips (and cautionary tales) via OSHA’s manual on nailgun safety.

Slide the jam clearing mech out of the way and allow the nail to drop out. If needed, you can grab a stuck nail with needle nosed pliers or – in more severe cases – push the driver blade back with a #2 Phillips screwdriver and a light tap of a hammer.

No one likes firing blanks. But in the middle of a job, missed nails can seriously compromise the integrity of your project. After all, nails that aren’t there don’t provide much holding power. To ensure you never miss a stretch of vital fasteners and turn your client’s roof sheathing into contract-ending sails of destruction when the first heavy storm blows through, the R350RHF has a lockout feature that disables firing when you’re low on ammo.

There is a heavy duty plastic hook on the end of the handle for hanging the tool from a rafter (or your tool belt) when you want to take a break or just need your hands free for a moment. In my opinion, the hook feels a little too tight.

The hook has to flex a bit more than I’d like to fit over a piece of 2-by lumber, giving me concerns for its longevity and making me think the pretty orange paint job may end up prematurely worn with use. The clip is made of heavy plastic, so it may be just fine. But I do wish the gap was a tad wider.

Hitting The Nail On The Head – The Ridgid R350RHF

Not only is this baby a huge time saver, it’s built with the user experience in mind. It has a swiveling air connector, attenuated noise, directed air exhaust, a self cleaning air filter built into the handle, easy jam clearing, 2 trigger modes, the recoil is pleasantly minor, and loading and unloading is as quick and easy as it gets.

It’s also relatively lightweight, having a magnesium body and aluminum magazine. My scale clocks it in at 7 lbs, 7.3 oz. Yes, it still gets heavy after a while. But considering some of the alternatives out there, it’s not bad at all. It’s much less wear and tear on the old flesh and bones than swinging a hammer all day. Best of all: no more smashed thumbs or blood blisters!

I’m not saying I’d die for a pneumatic nail slinger (because, you know, a dead man can no longer play with his tools) but, figuratively speaking, it is to die for. Like any tool, it’s not going to fulfill every need. It can’t be aimed precisely enough to thread the little holes in joist hangers or mending plates, so you’ll still have to nail your brackets by hand. And you probably won’t be assembling jewelry boxes and dainty trinkets with what essentially equates to Thor’s hammer.

But when there’s heavy work to be done, the Ridgid R350RHF is up to the task. If you’d like to reliably sink the heads of up to 3-1/2” nails in less time than it takes to actually reach out to and pick up a nail, this workhorse is for you.

Everyday maintenance is as simple as putting a few drops of air tool oil (included) into the air connector before you begin each morning (then maybe again later in the day with heavy use). And with Ridgid’s free lifetime service agreement that even covers the normal “wear and tear” parts (O-rings, piston stops and driver blades) – all for a new low price of under $200.