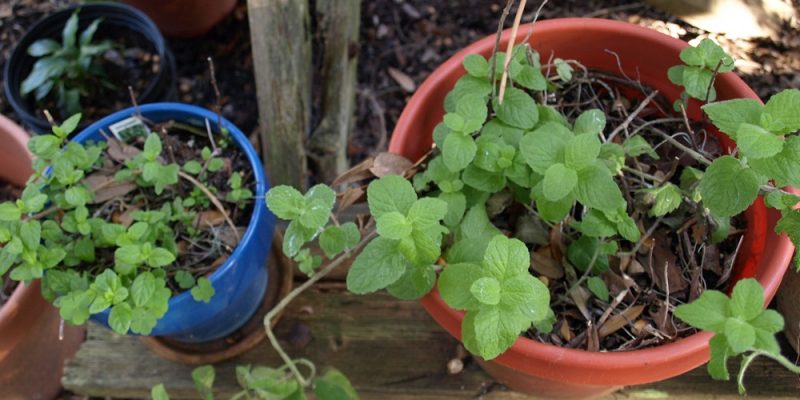 According to Greek Mythology, this set of plants came about when dear old Hades, Lord of the Underworld, got involved with a good-looking water nymph named Minthe. As has been the case in similar situations, things didn’t go too well when the wife showed up. Persephone promptly turned the other woman into a plant. Presumably she also blistered her husband’s ear off but that part of the tale didn’t make the Wikipedia entry.

The would-be seductress’ descendants are incredibly numerous so perhaps there was more to the tale than Hades ever admitted. For starters, the extensive mint family includes spearmint, peppermint, apple mint, orange mint, pennyroyal, ginger mint, chocolate mint, mojito mint, and julep mint. Just kidding on the last one! FYI, Spearmint is the most likely candidate for that popular drink.

In keeping with their origins as the offspring of a reformed (and transformed) water nymph, members of the extensive mint family like typically moist environments. I have read a lot of garden articles that say mints can tolerate full sun. Liars!!! Okay, maybe that’s a tad extreme. I imagine they could possibly tolerate the very weak sun in places further north, like Nova Scotia or New York. Our all-mighty and super powerful yellow orb promptly fries lesser mortals who go about sans sunblock for even a few hours in the summer, to say nothing of tender green plants.

Mints that get more than a half a day’s worth of sunlight at full strength around here tend to wilt after a couple hours. Give them two days without a twice daily watering in that kind of heat and they’re toast, fit for nothing but the compost pile. However, I have to say that orange mint is far more tolerant of sunshine and warmer weather than some of the others are. (It can withstand an extra hour of sun more than the others, maybe.) Then there are those mints that should come with a warning about how sensitive they truly are, rather like that girlfriend you forgot to call just the once, who promptly called the whole thing off.

Corsican mint, I’m looking at you! This plant is particularly finicky about sun and water conditions. Those of you who have read my earlier articles have probably have heard me mention the Great Corsican Mint Debacle of 2013 (or perhaps it was in 2012?). I acquired the aforementioned plant in hopes of harnessing its properties, which are notably used in Crème de menthe liquor, only to have it die in three days from the triple digit summer temperatures. It was only later, when I was doing some research on the subject, that I learned the plant has to be kept consistently damp. That pretty much puts it out of the running for surviving July in Savannah, Georgia.

Are Mints Invasive? Give Us Your Yard!

It’s generally considered a good idea to confine these plants to containers of some kind because they are rumored to have the ability to takeover an entire area with little encouragement, rather like the Axis powers in World War 2. Again, like mints that live and actually thrive in sunshiny spots, this seems to be a phenomenon more typically experienced by those who garden up North. While my mints have been known to successfully attempt an occasional escape from their pots and they’re very easy to propagate by air layering, they don’t have the hostile takeover plans that the strawberries seem to come up with at every waking moment. All the same, it is better to be safe than sorry. Confine these garden variety invaders from the beginning or face the possible consequences. After all, you don’t want your daffodil bed doing an imitation of Poland by putting up a brave fight but eventually surrendering.

Horehound and lemon balm are two noteworthy mint family relatives that make good additions to the herb garden. They too require plenty of water and modest amounts of sunlight. Like mints, they are fairly low-care plants that don’t often fall prey to either scary looking diseases or ravenous hordes of bugs. Like mint, lemon balm can be either tossed into salads or brewed into a refreshing tea. When grown in containers it forms a nice, small bush. Just keep your dogs from grazing on it, if you want it to truly thrive. (Then again, my dogs are a little on the odd side. I have one that is even addicted to peppermint.)

By comparison, horehound is said to be edible but it smells bad enough that I’ve never bothered to sample it. I’ve also never met anyone who actually liked it as a candy so your mileage here may definitely vary. However, the herb is said to be good for sore throats so horehound candy was presumably created more for its medicinal properties than its’ taste. It has grey leaves with a pebbly texture with a whitish cast to them, leading it to be more of aesthetic element in my garden than anything else. But that’s simply because I don’t have time to make horehound cough drops.