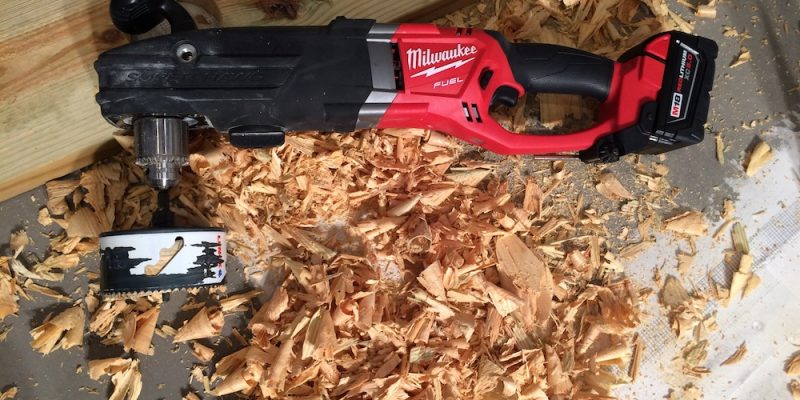 Earlier this year, we took a look at the just-introduced Milwaukee M18 Hole Hawg. When I reviewed it, it was by far the most powerful cordless drill I’d ever used. That was almost eight months ago, though, and the toolmeisters at Milwaukee have been hard at work, trying to come up with a way to make even BIGGER holes! If you’re a plumber or HVAC tech, or someone who needs to drill big honkin’ holes on a regular basis, join us as we check out the Milwaukee M18 Super Hawg, and we’ll see if they succeeded.

Here’s the official lowdown from Milwaukee:

The Milwaukee M18 Super Hawg, like the Hole Hawg, is available with either a standard or Quik-Lok chuck. Milwaukee sent us both versions, however my play time was limited to the standard chuck, the 2709-20, which makes use of a chuck key to insert and remove bits. This provides versatility, as you can use pretty much any bit in your arsenal. Face it, though; if you’re using this drill, you are likely chucking up BIG bits the majority of the time, and drilling a lot of holes. In that case, the Quik-Lok version, aka 2711-20, which allows for keyless, one-handed bit changes, will save you time – and the frustration of a possible lost chuck key. The Quik-Lok chuck accepts most 7/16″ hex shank or 3-flats shank bits.

Aside from the different chucks, the drills are identical. If you already have a charger and some M18 batteries, the Milwaukee M18 Super Hawg is available as a bare tool. For those of you not so equipped, or if you like the idea of adding a couple of 5.0 Ah XC (extended capacity) batteries to the mix, the drill is also available in kit form. In addition to the drill, you get a heavy-duty Milwaukee contractor bag, side handle (which also comes with the bare tool), two 5.0 Ah XC batteries, a rapid charger (which can charge both M12 and M18 batteries), and the chuck key (with the standard chuck version).

The Milwaukee M18 Super Hawg Does Some “Light” Work

As part of a current project, I’m installing nine recessed lights in a kitchen ceiling. The kitchen had been remodeled at some previous point in its shady past, and there are two layers of ½” drywall on the ceiling. Since I can’t get at much of the ceiling from above, I’m using 6” remodeling cans to install the new lights. This means I had to cut nine 6-¼” circles out of a solid inch of drywall. After spending several minutes using my dull drywall jab saw to cut out the first hole, my stiff neck and aching arms convinced me it was time to come up with a new plan.

After a quick run to the local Home Depot, I returned with what I hoped would be my new secret weapon – a Milwaukee adjustable hole cutter. Designed for installing recessed lights, audio speakers, fire systems, etc. in drywall and tile ceilings, it seemed like the perfect tool. As its name suggests, the cutter is adjustable (without tools) from 2 – 7”, so I could dial it in to the precise diameter I needed. I will admit, though, the hole cutter isn’t the beefiest-looking tool in the shed – I bought a new jab saw as a backup.

Even though the cutter claimed it could cut material up to 1” thick, I was skeptical; my one manual cutout had showed me how hard the old drywall was. Ever hopeful, I set the diameter to 6-¼” and inserted the arbor through the included dust catcher (another nice bonus!). I chucked it up into my regular ½” cordless drill, lined up the pilot bit, and dug in.

The hole cutter tore through the first sheet of drywall with no problem. As it started through the second (older) sheet, though, it started to bog down. About halfway through, the drill started making scary and unhappy noises. A few seconds later, it was obvious it was out of its league.

I pulled the hole cutter off, and chucked it up in the Milwaukee M18 Super Hawg. After fitting it into my partially-completed cut, I pulled the trigger, and a few seconds later the hole was finished. I popped off the cutout piece, and it was on to the next. Less than 20 seconds later, hole number two was complete. Sweet! Hole number three was also done in under 20 seconds, and I decided to let the cutter cool down for a few minutes.

I got back up on the ladder, and quickly cut out the next three holes. Even though it was still cutting strongly, I let the cutter cool down again, then knocked out the last two holes. The Milwaukee M18 Super Hawg didn’t break a sweat, although it did get a tad dusty. It cranked through all the 6-¼” holes with no bogging down or loss of power. And that $25 I invested in the hole cutter was money very well spent – it held up great, cut perfect holes, and saved me a lot of time and aggravation. When the blades do get trashed, they’re replaceable. The hole cutter is a champ!

I swapped out the cutter bit for a 1” ship auger bit, and drilled through several double ceiling joists to run wiring for the lights. The drill easily powered through the combined old and new joists, and I quickly had all my wiring run. The Milwaukee M18 Super Hawg felt like it could easily bang those holes out all day long, which is good, because it’s designed to do WAY more challenging work than that.

The target market for the Milwaukee M18 Hole Hawg is primarily electricians. The primary target audience for the Milwaukee M18 Super Hawg is plumbers and HVAC workers (although I doubt you’d find many electricians who wouldn’t be happy to have it!). When they’re roughing in plumbing, these folks spend a lot of time making big honking holes. I decided to emulate them. I grabbed a leftover piece of pressure-treated 2X8 and an assortment of hole saws, and got ready to rumble.

I chucked up a 4” hole saw, centered the pilot bit, and fired ‘er up. The Milwaukee M18 Super Hawg dug right in. About halfway through, I tilted the drill, and the drill made some clicking noises and stopped spinning. This is by design – there is overload circuitry built in, which protects the drill from getting fried. It also protects the user from being knocked on his or her butt, as this thing has some serious torque. As soon as I straightened the drill out, it powered happily through the rest of the 2X8.

Milwaukee also sent along a couple of their new Selfeed bits, which I was eager to try out. They come in various sizes; the one I tested was 3-5/8”. The Milwaukee Selfeed bits are super-beefy, solid hole-making chunks of steel, designed to deliver speed and endurance for repetitive drilling of large holes. I tightened it up in the chuck (it comes with a ½” hex shank), set the centering feed screw onto the 2X8, and pulled the trigger.

Using no pressure other than the weight of the drill, the Milwaukee Selfeed bit started boring its way through the wood. The Milwaukee M18 Super Hawg felt like it was in its groove; it powered easily through the 2X8, and I had a big hole – and a pile of shavings – in about ten seconds. I moved over a few inches, and watched the bit quickly chew its way through again. Wow – got a rough-in to do? With the Milwaukee M18 Super Hawg and an assortment of the Selfeed bits, you’re gonna have a house full of holes in a hurry.

I used the Milwaukee M18 Super Hawg for several other drilling chores, including some wiring runs through multiple studs. It just chugs along, and had no trouble powering through anything I introduced it to.

Any drill powerful and beefy enough to drill big holes all day isn’t going to be dainty. Weighing in at almost 14 pounds, the Milwaukee M18 Super Hawg has some serious heft to it. When I cut the holes for the light cans, it was definitely a two–hand job. Luckily, it ripped through each hole so quickly my arms didn’t have a chance to get too tired.

The drill is comfortable to hold and use, and your support hand can either use the built-in knob on the front of the drill or the reversible side handle. Anyway, the weight is the price you pay for the ability to drill with up to 4-5/8” self-feed bits and up to 6” hole saws. 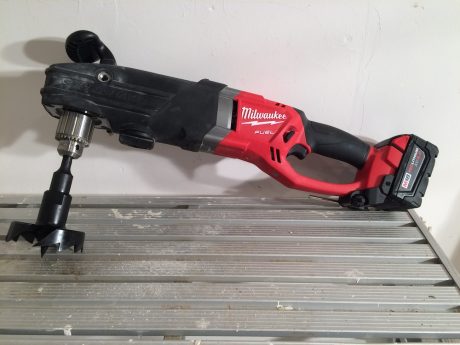