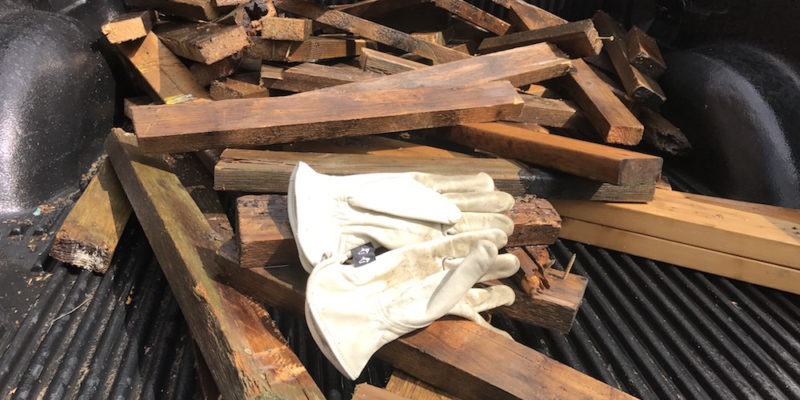 This post is sponsored by The Home Depot. While work gloves aren’t the sexiest accessories around, they are a must-have item for workers in most of the construction trades, as well as DIYers and homeowners who do yard work. A good pair of gloves can save you the time and pain of dealing with splinters, cuts and blisters, and they make your end-of-job cleanup a WHOLE lot faster and easier. If you’re tired of tossing your cheapo work gloves after a couple of uses, join us as we check out a pair of Husky water resistant leather work gloves.

For durability and protection, the Husky water resistant leather work gloves are made from 100% grain cowhide. There is elastic shirring around the wrist, strong enough to keep debris out without feeling too tight. The gloves look good, with tight, even stitching, and look like they should hold up well.

The Husky water resistant leather work gloves are available in Medium, Large and Extra Large sizes. I requested a pair of XL gloves, which were shipped from the Home Depot. I’m generally leery of buying gloves without trying them on; I have large hands, and often even the XL size gloves are too small.

When I first tugged on the Husky water resistant leather work gloves, they were snug but not uncomfortable. I could flex all the fingers, and after having the gloves on for a minute, they felt fine. That’s part of the beauty of leather; it stretched slightly to accommodate my hand, and from then on when I put them on, they went on easily and fit great. The leather feels soft on the inside, and the stitching doesn’t cause any chafing.

One of the primary uses of work gloves for many homeowners is to tackle gardening chores. We have a large lot with lots of greenery, including a fair-sized stretch of ivy ground cover along our front walkway. It apparently has some powerful magnetic attraction that encourages seeds from every other species of plant to land there and take up residence. To me, it’s all green, and diversity is good, right?! As so often happens, though, spousal opinions vary, and my wife concluded that it makes the place look a tad unkempt. Since we will have numerous relations descending on us shortly for our son’s wedding, she “encouraged” me to tidy up the ground cover.

My self-preservation instincts being finely honed from many years of marital bliss, I donned the new Husky water resistant leather work gloves and waded into the hodgepodge of greenery. There were little oak and maple saplings, along with several mystery species of plants waiting to be tended to. I grabbed an oak sapling – the most prevalent interloper – and gave it a yank. For their size, these things can be incredibly hard to remove. Even using two hands on some of the small saplings barely budged them.

Having the Husky water resistant leather work gloves was definitely a plus; I’ve done this barehanded in the past, and ended up with my hands pretty well shredded. The gloves got a good grip, and I was able to uproot about 70% of the invaders. The remainder apparently have a root system that extends several miles. I cut them off at ground level, but I suspect they are already inching their way slowly back up, stronger than ever.

Next up on the honey-do list was the relocation of a jumbled stack of firewood. It had never been properly stacked, and had toppled and become a mite overgrown with weeds, and I admit it looked like hell. I cleared some space at the edge of the driveway, and got the wood all moved and prettied up. Using the Husky water resistant leather work gloves undoubtedly saved me a splinter or three…Underneath the firewood jumble, there were over 130 bricks set into the ground. The gloves saved a lot of wear and tear on my hands as I pried them all up and stacked them by the shed.

Getting The Soggy Stuff

Since part of the Husky’s claim to fame is their water resistance, I decided to put that feature to the test. I had a small load of scrap 2x4s waiting to be loaded into my truck. This is another chore best done with gloves on, although I’ve done it without them in the past. Wanna see my splinters? I gave the wood a good soaking with the hose before tossing it into the truck. I also sprayed water directly on the gloves for a few seconds. The gloves did a great job of keeping my hands dry; no water soaked through the leather.

Here is a good chance to point out that the Husky water resistant leather work gloves are water RESISTANT, not waterproof. They’re great for chores like handling wet lumber or tools, pulling out wet plants, and so forth. With constant exposure, or if they get immersed in water, it will eventually seep in through the seams, and your hands will get wet. For jobs where your hands will be constantly exposed to water, you need a pair of neoprene or other totally waterproof gloves.

Over the years, I’ve probably gone through hundreds of pairs of work gloves, ranging from the cheapo brown, white or yellow “disposable” work gloves to more expensive – and durable – gloves. The adage “you get what you pay for” certainly applies here; many of the cheap gloves self-destructed shortly after tugging them on for the first time. Some actually ripped WHILE I was putting them on! I’ll still use that type of glove when I want to be able to toss them after doing the job – after schlepping out a bunch of moldy drywall, for instance.

For daily usage, though, it’s more satisfying to have a GOOD pair of gloves, that are durable and fit well. The Husky water resistant leather work gloves fit the bill nicely. They’re comfy, and have held up very well through several projects over the past week. I particularly like the fact I can pick up a bunch of wet junk without having to search for a dry pair of gloves immediately afterwards. Get your hands on – or in – a pair at the Home Depot for just under $15.