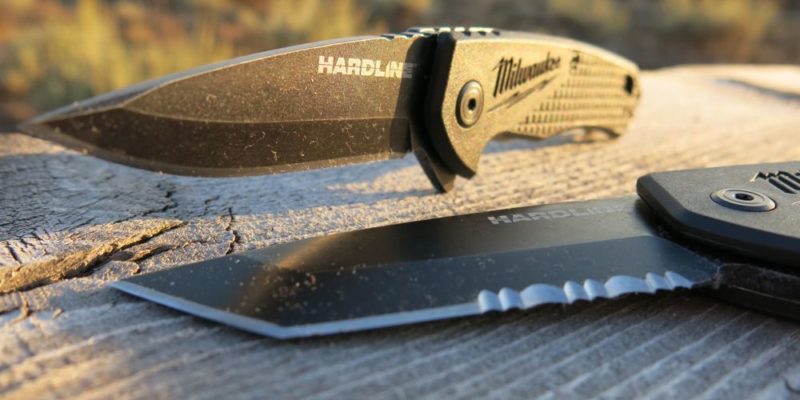 I have been a knife nerd for decades now. When I was about five my mom gave me a Swiss Army Knife which I then used to promptly slice my finger while “carving” a stick. Despite the quick lesson in the importance of exerting cutting force away from body parts, the lure of something so simple and yet so practical had me hooked. Several decades pre-9/11, I even tried to board a plane with a giant German hunting knife with a deer’s hoof handle (I forgot it was in my carry-on with assorted legos, German chocolate, and the latest luxury car magazine). Even back then, airline security didn’t appreciate this oversight, “Messer sind VERBOTEN!” What I’m trying to get at here is that I have long appreciated knives for the great tools they are. Last year team red released the Milwaukee Hardline Knives and sent us a couple to check out.

Milwaukee got a taste of how important blades are to their customers when they released their very successful Fastback utility knives. They quickly iterated and released the Fastback II, soon to be followed by an assortment of snap-off knives to compete with the likes of Olfa. With the Milwaukee Hardline Pocket Knife series, it’s clear team red is hoping to offer something that’s less like carrying around a utility blade and more like a traditional folding knife for everyday carry (EDC). 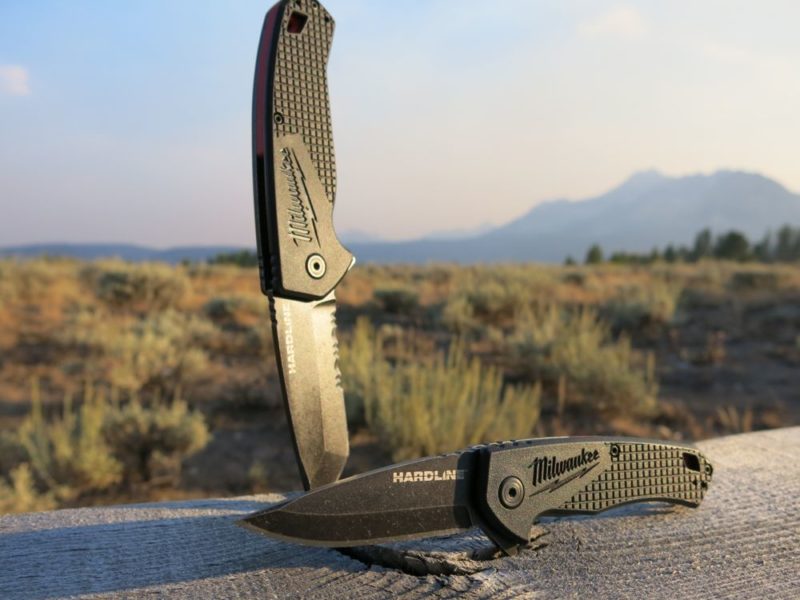 Milwaukee Hardline Knives utilize D2 steel. This high chromium content steel, according to Wikipedia, “is very wear resistant but not as tough as lower alloyed steels. The mechanical properties of D2 are very sensitive to heat treatment. It is widely used for the production of shear blades, planer blades and industrial cutting tools; sometimes used for knife blades.” From what I found referenced online, it seems D2 has a reputation for being somewhat brittle and challenging to sharpen. However, it also has a reputation for holding a sharp cutting edge for a very long time. I have not had to sharpen my Hardline blades yet, and they still remain remarkably sharp. I haven’t seen any issues with brittleness, but then I haven’t used mine as crowbars either.

Milwaukee Hardline Hardly Hard to Open, but Harder to Close

Any good folding pocket knife needs to have a good opening mechanism and Milwaukee Hardline Knives pull this off nicely. Rather than a thumbstud as often seen on a knife like this, there’s a small ridged triangle “flipper” by the axis of the blade. Although you can use your thumb to expose the blade, I prefer using my index finger so the rest of my hand can retain a tight grip. Once broken in you can actually flip the blade open with just the flipper, but it’s easier to simply get the blade started with the flipper and then flick your wrist. A bearing system makes this a very smooth opening knife. More on closing the Hardline knives in a minute. . .

As a knife nerd it should not come as a surprise that I have some opinions on pocket knife locking mechanisms. One of those opinions is that I’m not a huge fan of liner locks or the similarly-designed frame lock (which the Milwaukee Hardline Knives utilize). Although the video is from a while back, my ramblings on different locking mechanisms are still relevant. I talk about liner lock designs around minute three of the four hour (actually eight minute) video:

As a frame lock design, essentially one side of the Milwaukee Hardline Knives is glass filled nylon with a stainless steel back. The other side is steel, with part of your handle being the frame lock itself. As a result, the glass filled nylon side feels fairly grippy, while the steel side feels more slick. This is where having a lockback (or even liner lock) design would allow both sides of the knife to have a grippy glass filled nylon grip. However, there are also advantages to a frame lock like the one used in the Milwaukee Hardline Knives. Frame lock designs are known for being durable and for being less likely to fail due to junk fouling the locking mechanism. So, if you wield your blades in dirty, grimy locales (who doesn’t?), or if you just have immense quantities of pocket lint, having a frame lock can be a good thing.

Back to closing the Milwaukee Hardline Knives. This is really my least favorite part of these knives. As with any frame lock (or liner lock) design, you’ll need two hands and the willingness to stick your thumb in the path of the closing blade as you push the lock over and carefully start the blade on its path to being folded away. When compared to something like the Fastback design which closes with a mere button push and a little inertia, I would love to see a different lock mechanism on this blade.

Milwaukee gets a lot of things right with the Hardline knife series. A lanyard hole gives some safety and carrying options. The stone washed black oxide finish is sexy, rust-resistant and easy to keep looking clean when compared to a shiny polished blade. The reversible tip-up belt clip is the ideal, most efficient carrying position in my humble knife nerd opinion. The blades are wicked sharp and retain their edge exceptionally well. The overall thickness of the knives is also trim, keeping them from bulking up your pockets. The biggest improvement I could see is an easier-to-close locking mechanism like a lockback or something similar to Benchmade’s proprietary Axis mechanism, both of which would also allow for a more grippy and contoured grip on both sides of the handle. However, keep in mind knife nerds have differing opinions on what mechanism works best and why. While I’m not a fan of liner lock and frame lock designs, other people swear by them. Locking mechanism biases aside, I still find myself frequently reaching for one of my Milwaukee Hardline Knives for EDC. I often use the 2.5″ blade when I want a minimal, less conspicuous blade for light-duty tasks, but I like the 3″ serrated tanto blade the best with its fuller grip and hefty blade for heavier duty cutting tasks.

You can find the Milwaukee Hardline Knives in 2.5″ to 3.5″ blade lengths from about $60 to $80 via our sponsor Ohio Power Tool: