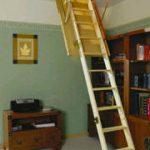 The Goonies really did a number on us kids at the time. Man, did that little film ever get our imaginations going on the possibility of finding hidden clues and treasure. I was soooo disappointed to not live in a home that had an attic – the starting point of all pirate maps, secret passages and treasure codes. The lack of an attic (and the fact that the house was built in the 70s) didn’t stop one little friend of mine whose parents one day came home to find the hatch to the ceiling crawl space busted in and insulation pouring into the hallway. I suppose it could have been worse – remember those children who took to the sewers after watching Teenage Mutant Ninja Turtles?

But if you really do have an attic (lucky!), having a safe and well-functioning attic ladder is a must. While Goonies never say die, you very well could if the stairs swing out at your head when opening the attic or the steps collapse while you’re using it. And leaning your ‘regular’ ladder against the attic door just will not cut it, unless of course you’re looking to be the next victim to appear on America’s Funniest Home Videos.

One of the best manufacturers of attic ladders is JNK Products. All of their ladders are made of solid pine, support up to 350 lbs., neatly fold into the ceiling and have grooves and treads in each step for added safety and grip. A number of different sizes are available and range from $350 to $550. Definitely worth the investment if you think your kids might one day watch a certain classic starring Mikey and the gang.