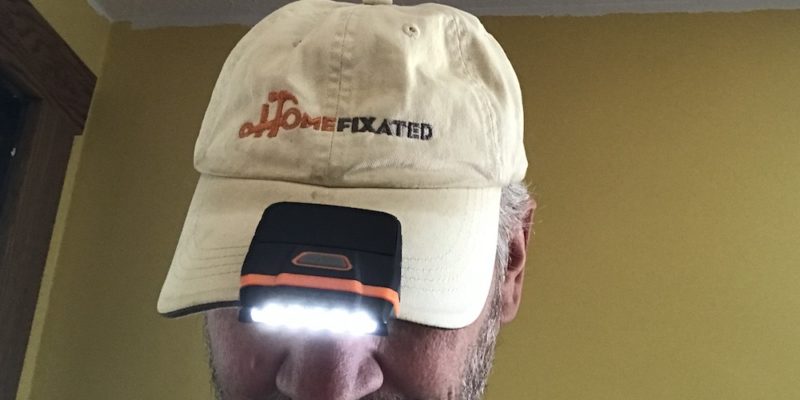 When I’m crawling through a cramped attic or nasty crawl space, or wedging myself into a vanity or sink base to do a bit of remedial plumbing, I want LIGHT, dammit! It’s bad enough to have eo be in there, without fumbling in the dark. Carrying a flashlight or work light means one less hand to carry tools or supplies, or to work with. I have a couple of traditional head lamps, with elastic bands. They’re an improvement over a flashlight, but they’re cumbersome, and can be hard to keep in place. The engineers at Klein put on their thinking caps, and came up with a much better alternative for anyone who wears a hat: The Klein LED Cap Visor Light. Curl up in your favorite cramped space, and let us enlighten you.

Unlike a traditional headlamp, the Klein LED Cap Visor Light uses a metal clip to cling onto the visor of any baseball-style hat. And when I say it clings on, picture an elected official running for re-election. The power switch also switches between the light’s high and low settings, and the light pivots so you can aim those beams right where you want ‘em. Here’s the official rundown on the features of the Klein LED Cap Visor Light, followed by a hard rocking, enlightening video from Klein:

• Contoured metal clip on this cap light fastens easily onto the hat brim or visor
• 5 bright LEDs flood the area with light
• Pivoting light head allows up to a 60° lighting angle
• 125 Lumens on high for 4-hours, 40 Lumens on low for 8-hours
• Conveniently centered power button controls the light from high to low to off
• Durable headlamp with a drop-test rating of 10 ft.
• IP54: dust and water resistant
• 2 x AAA batteries included

When I liberated the Klein LED Cap Visor Light from its blister card, the first thing I noticed was how compact it is. At around 2-1/2” front to back, 2-1/4” wide and about 5/8” thick, you won’t have to dedicate much storage space to it. The light would easily fit into a cubby on most tool bags, or clip it onto a handle or strap.

As you might expect, all that smallness makes for a very lightweight light. Even with its batteries installed, the Klein LED Cap Visor Light can’t weigh more than three or four ounces. With the light installed on my hat brim, the difference in weight is almost unnoticeable. It’s so lightweight, you might even be tempted to just keep it on your hat all the time. In social settings, this might even have the added benefit of gaining you some extra personal space.

Speaking of those batteries, the Klein LED Cap Visor Light draws its power from twin AAA batteries. Apparently someone at Klein has some customer satisfaction savvy, because not only are the batteries included, they’re INSTALLED! Pull the light out of the package, press the go button, and light up your world!

Fill It To The Brim With Light

Mounting the Klein LED Cap Visor Light on your visor is easy; just line up the clip and give the light a firm push. And that little wire clip is mighty grippy; once it’s on, it is NOT coming off until you want it off. I’ve bumped it, dropped the hat, and tried as hard as I could to shake the light off. Not happenin’.

The power/high-low button is positioned in the center of the top of the light, near the front. It’s easy to reach and operate. Pressing once lights up the 125-lumen high beam. Been eating your carrots, and don’t need that much light? Hit it again, and get a jump in run time with the lower-powered 40-lumen low beam.

A feature I was surprised to find on such a small light is the pivoting light head. The five LEDs normally point straight ahead, but the front of the light can be pivoted downward up to 60°. This lets you read something without having to tilt your head, or work on a project on a table or workbench. The hinge feels solid and sturdy, and the angle stays right where you set it.

Banishing The Darkness With The Klein LED Cap Visor Light

The second photo shows what that same view looks like after pushing the power button once. The little light lit up a good portion of the room where my DeWalt slider resides. Not sure I’d want to cut trim by headlamp all day, but it’s nice to know I could, in the event of a trim emergency.

To simulate a real-life scenario, I turned off all the lights in our house late one night, and went on a scenic upstairs/downstairs walkabout. Afterwards, I went outside and took a stroll around our yard, and up and down our underlit street. More shortly on why both of those activities might come in handy…

When fired up in both high and low modes, the Klein LED Cap Visor Light casts a nice, wide pool of light. It isn’t super bright, but it throws the beams far enough to easily find your way around a large room, or to see the path you’re following. For close-up work, when you’re jammed into a vanity or working on a breaker box, for instance, its light output is great.

Electricians, plumbers, HVAC repair techs, home inspectors, attic insulation installers – these are just a few examples of pros who have to work in dark, often cramped, places. For anyone who doesn’t want to schlep a large work light along, or strap on an LED headlamp, the Klein LED Cap Visor Light makes an excellent alternative. It’s tiny, sturdily built, weighs almost nothing, and cranks out a decent amount of light. It’s also durable; the light has a 10′ drop-test rating, and an IP54 rating for resistance to dust and water.

Although the Klein LED Cap Visor Light is targeted at tradespeople looking for a convenient work light, I’m betting the little light will be equally appealing to homeowners. It would be ideal for walking the dog at night, leaving a hand free to scoop the poop (you DO scoop the poop, right?!). Other “brilliant” uses include setting up a campsite after dark, changing a tire, working in the dark scary corner of the basement or garage, nighttime cross-country skiing or hiking…use your imagination!

Since our power tends to go out pretty much any time the wind shifts, I plan to keep the Klein LED Cap Visor Light installed on a hat in our hallway when I’m not using it. That will limit the stumbling around in the dark, locating our LED and oil lamps. My wife, whose office is a block and a half from home, has already told me she intends to “mine now” it to light her homecoming path during the dark winter months. I think I have my first stocking-stuffer idea…

Any downside? Not really. Like any battery-powered light, it will require regular feedings with fresh AAA batteries. For the occasional user, this isn’t that big a deal; the light will run for about four hours on high, and eight hours on low. Pros using it on a daily basis should be prepared to buy the large economy size package of triple-A’s. If the Klein LED Cap Visor Light was USB-rechargeable, like the Milwaukee USB Flood Light, it would be perfect. Maybe version 1.2…?

If you have to work in dimly-lit spaces, or enjoy late-night walks through your darkened house or streets, check out the Klein LED Cap Visor Light. Chances are, you’ll tip your hat to Klein’s engineers for coming up with such a bright invention. The light is available from a variety of vendors, both brick and mortar and online. If you buy it from the Home Depot, their return policy gives you 90 risk-free days to light up your world.