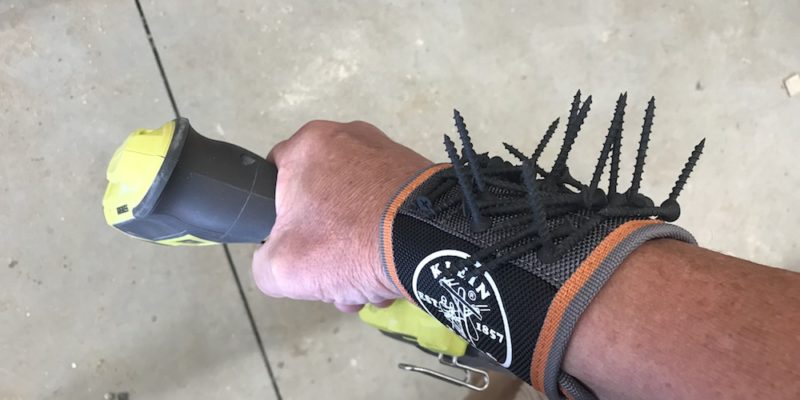 On my long list of “Time wasting work activities,” Number One is trying to figure out where the $%&*!* the necessary tools have stashed themselves. A close second is trying to retrieve the ten tiny screws I just dropped into the foundation trench, or cleaning up the blood after impaling my finger while digging in my apron for a drywall screw. Sadly, no one has yet invented a device that can overcome my lack of organizational skills. I may be able to cut down on my trench diving and Band-Aid use, though, thanks to the recent arrival of a Klein Magnetic Wristband.

You may be yawning and thinking yeah, whatever, old news. The idea of using a magnetic wristband to corral small parts or fasteners isn’t new; they’ve been available for many years. I’ve had a couple; one was so useless, I chucked it after one use.

I still have the other, which I actually used a few times, until I decided it was more of a PITA than it was worth. It has a ¾”- wide wristband that has to be fed through a small slot, and looped back over itself. It’s too short to be able to fit my hand through, so it has to be totally undone every time it’s used. It has nine fairly powerful magnets, and a stiff-ish platform around 2” square.

The Klein Magnetic Wristband, on the other hand – or wrist – is fast and easy to put on and remove. Just wrap it around your wrist, and the hook-and-loop closure holds it right where you put it.

Instead of one flat platform, there’s an array of nine powerful rare-earth magnets that conforms to your wrist. We’ll explore why that might be a useful layout shortly. Meanwhile, yield to the pull of the list of features, followed by a hard-rockin’ video from Klein:

The Klein Magnetic Wristband – It’s All In The Wrist

A big reason I quit using my previous magnetic wristbands had to do with how uncomfortable and cumbersome they were. The narrow wristbands on both dug into my flesh, and on one of them, no matter where you placed parts or fasteners, they tended to congregate into a tangled clump.

It’s wide open spaces on top of the Klein Magnetic Wristband. A much wider band, lined with a breathable mesh fabric, makes the band much less irritating to wear. Constructed of rugged 1680d ballistic material, the band has good odds of surviving the wear and tear of daily use. A large hook-and-loop surface area also ensures the band will fit a wide – and narrow – assortment of wrist sizes.

There are other options, too. I don’t like wearing things on my wrist; I don’t even wear a watch. There are times when I just have to suck it up and bear the burden, but if I’m working on a project where I’m relatively stationary, I can wrap the Klein Magnetic Wristband around a toolbox or backpack handle, or even around my belt. It will also lay nice and flat on a workbench, keeping tiny parts from wandering off.

The Magnets May Be Rare, But Don’t Whine – There Are Nine!

As I mentioned, some magnetic wristbands tend to pile everything into one big clump. If you’re hanging 40 sheets of drywall, and just need mass quantities of drywall screws, that’s not a big deal. If the carburetor you’re working on has five different screw sizes, though, or you’re assembling some nightmarish piece of Ikea furniture with multiple fasteners, some separation might be welcome.

The Klein Magnetic Wristband has nine separate magnetic hot spots on which to stash your steely goods. When you place a fastener or small metal component on one of the distinct magnetic squares, it tends to hold its position pretty well.

I loaded up the Klein Magnetic Wristband with an assortment of bolts, washers and nuts. It kept them nicely separated, and kept a good grip on everything, even when I shook my arm around like a crazy man. Which I’m not. Unless people insist on talking about politics, or their health problems.

Getting A Grip, And Screwing Around

To test the holding power of the Klein Magnetic Wristband, I slapped on a pair of electrician’s pliers and a pair of wire strippers. The nine magnets went right to work, and easily held the two tools, with no slippage.

I also gave it a workout while installing some drywall. The Klein Magnetic Wristband held a healthy helping of drywall screws, and it was much less painful peeling them off the magnets than trying to pluck them out of my pocket or toolbelt pouch without skewering myself.

Any drawbacks? Not really. After having it on for a couple of hours, my wrist was pretty sweaty under the Klein Magnetic Wristband. After that, I swapped it from wrist to wrist periodically. Along with alleviating the sweat issue, this helped make installing the drywall a super-fun game! Just kidding.

Can You Use The Nine Degrees Of Separation Of The Klein Magnetic Wristband?

Like I said, I’m not crazy about having anything strapped around my wrist. I’m even less crazy, though, about having to lean over and grab a couple more screws every 20 seconds, or searching for the tiny screws or parts I dropped. Magnetic wristbands are good at keeping parts or fasteners handy, and the Klein Magnetic Wristband also helps keep them sorted.

Mechanics, drywall installers, HVAC or other service techs, hobbyists, and carpenters are just a few examples of users who would benefit from using the Klein Magnetic Wristband. It would be helpful for anyone who has to work with any sort of metal fasteners or parts. It’s well designed and executed, and seems to be built stoutly enough to survive the real world.

If you’re tired of diving into trenches, or cleaning blood off of your tool belt, yield to the pull of the Klein Magnetic Wristband. If you buy it from the Home Depot, you’ll have 90 days to form an attachment, risk free. 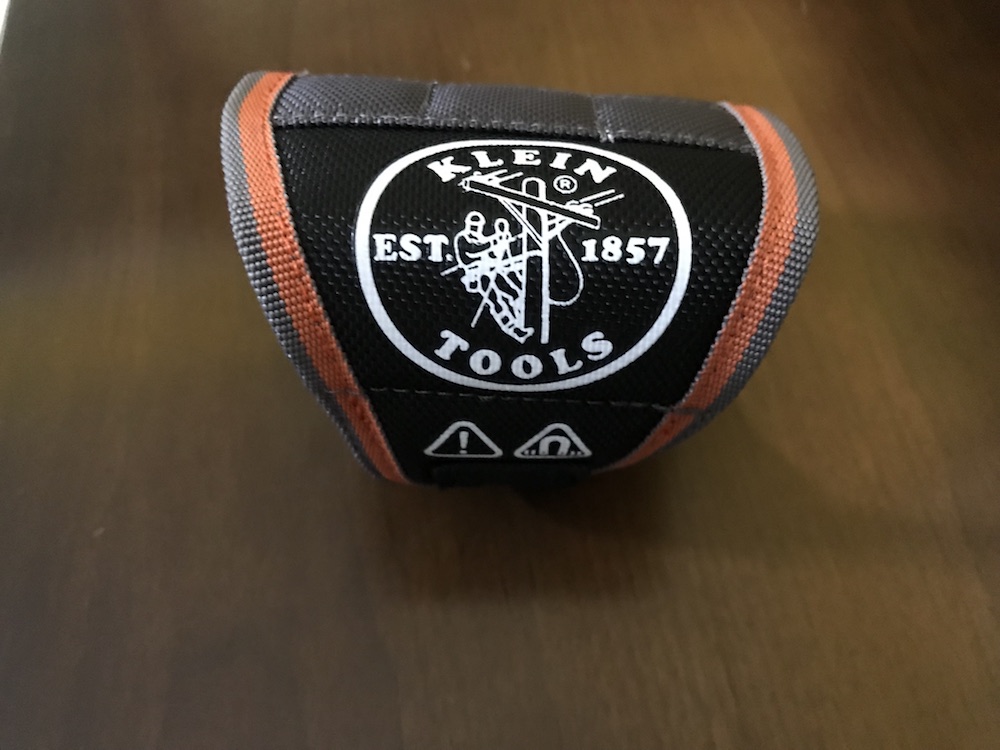 Buy the Klein Magnetic Wristband from the Home Depot: