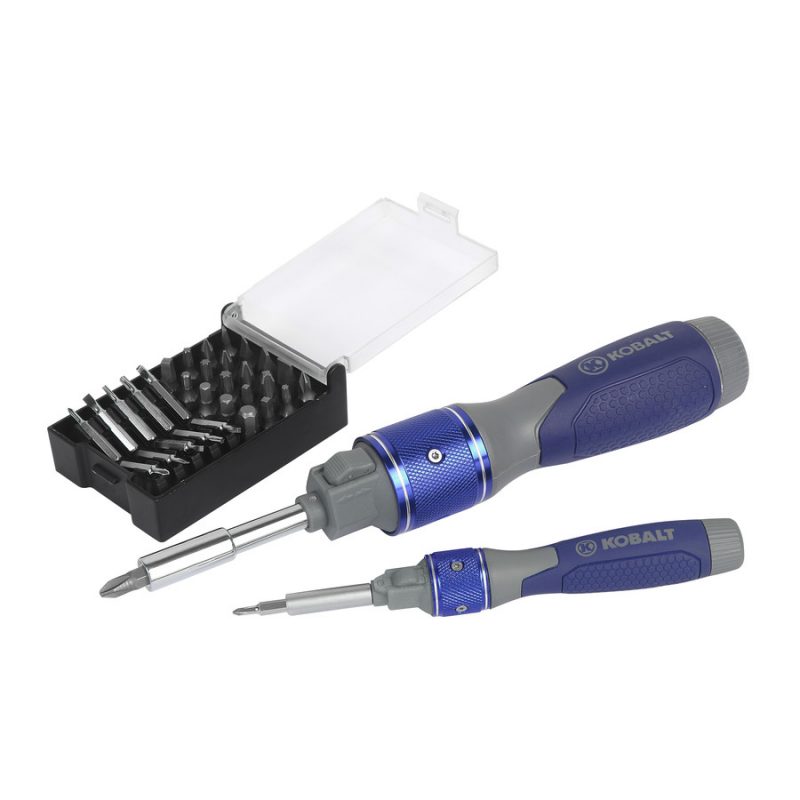 I don’t normally gush about new tools. In fact I don’t normally gush about anything. I’m not a gusher. At least not until I used the Kobalt 32 Piece Double Drive Screwdriver Set. Now I’m gushing all over the place. I absolutely love this great hand tool and I’ve already found a million and one uses for it around my workshop and home. It’s even earned a spot on my special tool bench where I keep my most used tools. Out of the last five projects I’ve completed since I’ve had it, I’ve used all five times. Oh and did I mention that I really love this screwdriver?

It’s always a good day when I get a package in the mail. And the day I got the package with the Kobalt 32 Piece Double Drive Screwdriver Set to test out for HomeFixated was a great day indeed. I had gotten a few other tools from Kobalt that day but when I spread them all out on my work table, I gravitated immediately towards the screwdriver set. These little screwdrivers didn’t look like much at first, but once I broke them free from their packaging, the screws started to fly.

What the Heck is a Double Drive Screwdriver?

If you’ve ever had to screw in something with one hand while holding the material with your other free hand, you know how tough that can be, especially when it’s over your head. That’s where a double drive screwdriver comes into action. You can rotate the handle in either direction while the bit stays in the screw. The bit only turns the way it’s supposed to so you can drive in a screw with one hand. It really works well for applications where a screw tightened by a battery powered screwdriver provides too much torque to the fastener.

I do a lot of work on doors. From hinges to door knobs to locks to sliding glass door rollers, I’ve messed with it all once or twice in my life. I always have trouble using power tools on these sensitive materials not only because I can over tighten and strip the screw too easily with a power driver, but also because I can scratch the door hardware with the tool itself if it spins wildly out of control. With the Kobalt 32 Piece Double Drive Screwdriver Set, I don’t have to worry about either one of those troubles and I can hold the door hardware with a free hand while I tighten the screws to perfection.

I recently finished my project on installing a fan light kit but I couldn’t have done it in half the time without the Kobalt 32 Piece Double Drive Screwdriver Set. The set comes with two different sized double drive screwdrivers and a gaggle full of bits for both tools. I used both the large and small screwdrivers on the project for taking apart and putting together the light kit. I found that it really was a stout tool that allowed me to hold the screw on the tip of the bit, insert it into the hole above my head and tighten it—and all with one hand.

My dad came by my shop the other day and we showed him my new tool swag from Kobalt. He was impressed by the Double Drive Screwdriver Set and he said right off the bat “I bet that would be good for door work”.

I laughed and told him I already used it twice to remove door hardware for a painting project.

“How much did that cost?” He asked with his head leaned back skeptically.

He started to walk away but before he left he said “Impressive”. And that was the first time he’s ever said that word in his life.

What’s the Kobalt Double Drive Screwdriver Up to These Days?

This tool stays by my side from now on. It has a permanent place on my workbench, tool pouch and in my work truck. I don’t travel to a job without it and it really has become one of my most valued hand tool sets. I’d recommend this tool to anyone not only because it’s so useful, but also because it costs so little, yet does so much.

If you want to know more about this great Kobalt tool, visit any Lowes website or go in-store for more details on all of the great tools from Kobalt.