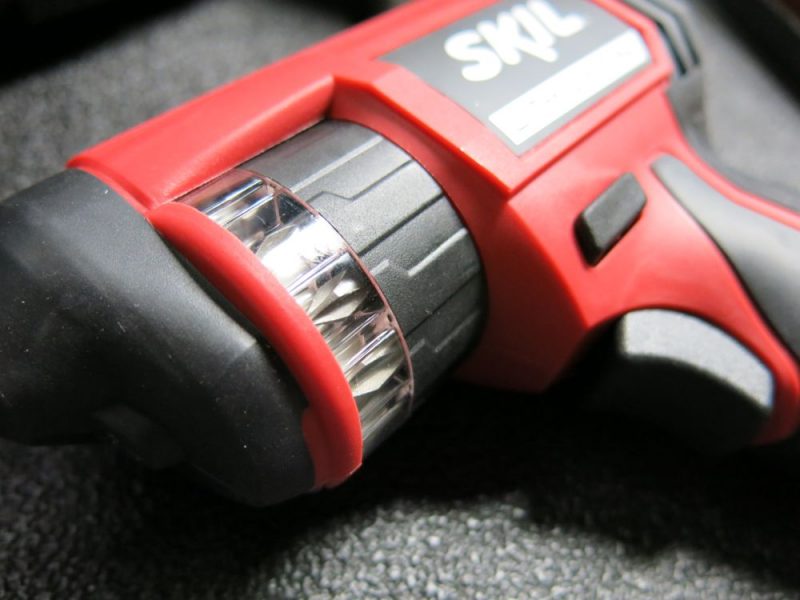 One of my first tools was an early Bosch cordless drill. It was back in the days before “Max” had to follow every marketed voltage stat, and before serious power made it into the cordless realm. One feature that it and some other tools at the time had was onboard bit storage. This tool had two double-ended bits that covered just about all the flat and phillips fasteners of the early cordless era. Despite all the amazing advances surrounding cordless drills and drivers, I have to say I miss having convenient bit access. Apparently someone at Skil missed that convenience too. Rather than just tack on a couple bit clips, they completely rethought cordless screwdrivers AND their bits. 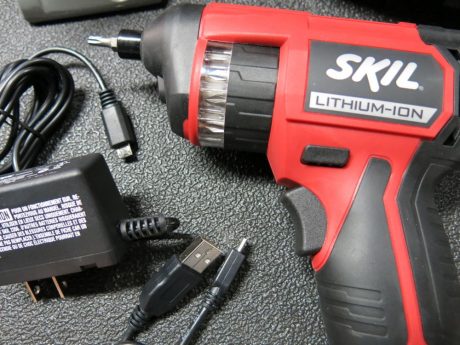 At first glance, I’m tempted to describe the Skil 360 as a pregnant-looking Skil iXO. However, I suspect Skil would prefer a description more like “It’s the closest a cordless screwdriver will ever get to a 357 Magnum.” However you like to describe it, the Skil 360 clearly shares much of its DNA with the iXO. Like the iXO it’s a 4V Max. Unlike the iXO, it has some very unique tricks up it’s sleeves, literally. 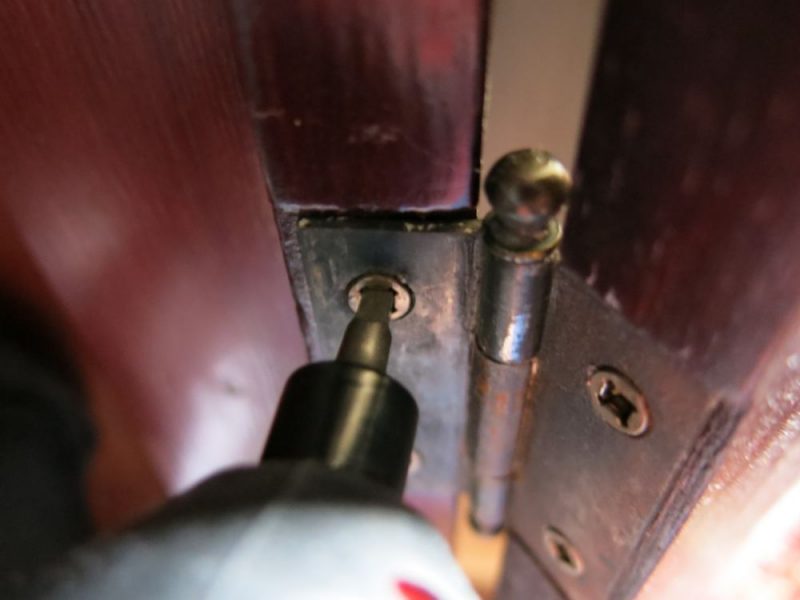 A couple years ago I re-installed several refinished, vintage closet doors. The doors had some small, ancient hinges, one of which I managed to install upside down. Over time, the hinge pin gradually began to wiggle itself loose and drop onto the floor, at which point I’d awkwardly try to hold the door in place while reinserting the pin. I’d then repeat this ridiculous process on a regular basis, mainly because I was too lazy to trek down to the shop, find the right size square drive bit and reinstall the hinge proper side up.

This became one of those embarrassing acts of procrastination that ultimately wasted 100 times the effort of just fixing the hinge immediately. Despite epic procrastination and resistance to such a simple task, I had the hinge swapped out about 30 seconds after I un-boxed the Skil 360. A speedy dial of the Quick-Select barrel chambered the right square drive bit, and with a brisk slide forward, I was locked and loaded. The Skil 360 overpowered months of senseless inaction and helped me get the job done. After playing around with several screw driving tasks in quick succession, the Skil 360’s Quick Select feature moved from a “gimmicky” initial impression squarely into the “indispensable” category. The ability to rapidly move from bit to bit and project to project brings an unprecedented level of efficiency to your screw driving tasks. From furniture assembly to working with windows and doors, the Skil 360 might be enlisted into action more often than you might think. One pet peeve of mine is when bits, typically hex bits, get pulled out of the tool accidentally when withdrawing the tool from a fastener. Having the bit get stuck in a fastener and then pulling out of the tool is not only annoying, but it’s a big time waster too. Happily, Skil engineered the bit holder to be firm. While you can easily swap out the standard 1″ bit tips, the bit collar is designed for a solid hold to minimize the bits being pulled out during operation. It takes a firm pull and a little extra effort to swap bits, but we’d take that in a heartbeat vs. bits pulling out mid-use. Another nice thing about the standard bits is that you can craft your own custom selection of bits. We could see that coming in very handy for folks that regularly work with less conventional bits that aren’t in the stock bit selection. However, chances are the stock selection will cover 98%+ of most user’s screw driving needs. 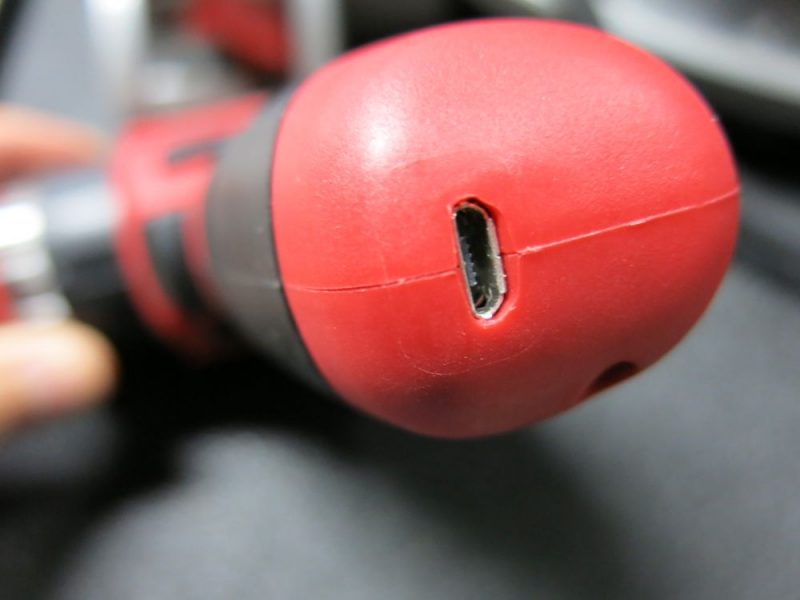 Yes, it’s true, the Skil 360 is the only screwdriver with USB charging capability. It’s also the first tool I have charged via my computer rather than a wall outlet. Although the single charging port at the base of the tool is a Micro USB port, you can still charge the tool via a wall-wart that includes a micro USB charging cable. The charger charges up a 1.5 Amp Hr cell, which Skil claims will hold its charge for up to 18 months. We didn’t test that since it would have made the review REALLY late. One nice thing about the micro usb design is even if you forget your charger, you can still use something like a cell-phone charging cable in a pinch. While this too might seem gimmicky at first glance, we actually think it makes a lot of sense to go with a more universal charging plug which simply increases the flexibility of when and where you can charge up the tool. At least as long as usb remains a common standard.

Skil claims the 360’s 210 RPM is one of the best in its class. If you’re like me and are accustomed to higher power cordless tools, you’ll likely find the 360 to be relatively slow. However, I actually prefer slow rpm’s for this type of tool. The last thing you want to do with hinge screws or delicate hardware finishes is go shredding through bits & fasteners. The relatively slow RPMs keep you in complete control and provide a respectable mix of power and speed. Skil commissioned third party testing which pitted the Skil 360 against several tools in its class, including the Black and Decker Gyro and the multi-barreled Worx Semi-Auto screwdriver. The test involved screwing 1-1/4″ Coarse-Thread Screws driven into 1-1/2″ synthetic trim board (chosen for consistent density). The lab found that Skil 360 drove an impressive 167 screws. Most of the rest of the pack drover between 97 to 119 screws, with the Worx driver coming in at 31 screws. We didn’t verify or replicate a similar test, but we did find the 360 to have ample power and runtime, especially considering its target market.

To see the Skil 360 in action, check out this promo vid from Skil:

Sometimes longer-term use of a tool warrants an update. In this case, it’s to note that we have run into issues with the top of the bit selection slide popping off. We’ve been able to put the slide back on, but we feel it’s a potential build quality issue worth noting. The review tool hasn’t been subject to any undue force or damage, so the slide isn’t something we’d expect to fall apart. While we stand by the original review, we would have liked to have seen a more robust and durable slide mechanism on this tool.

Conclusion and Where to Buy

When we reach for tools, we often reach for what’s convenient. All too often, a great tool might still require a long search for the appropriate bit. The Skil 360 is one-stop shopping for the vast majority of light to medium duty screwdriver tasks at hand. And, at under a $50 price point on Amazon.com, the Skil 2356-01 360 Quick-Select Screwdriver

is a hard bargain to pass up, and a great pick for Father’s Day! And, if you happen to be reading this during May, 2013, you can enter to win both a brand new Skil 360 AND a Skil circular saw as well in our May 2013 Free Stuff Giveaway! 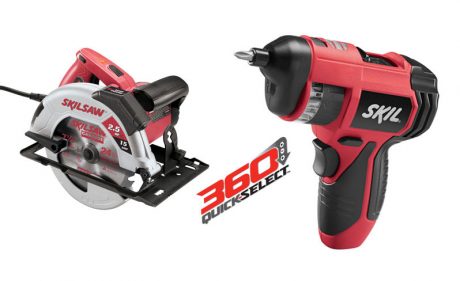