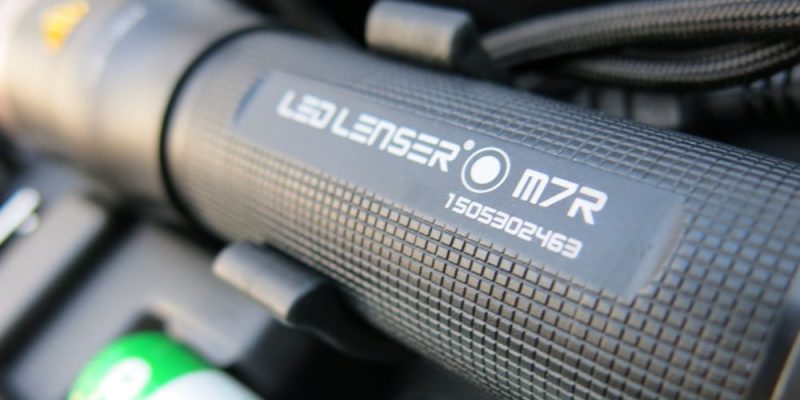 I’m a definite flashlight geek. I had a long love of the Streamlight Stinger flashlight, however once its first rechargable battery was dead, I could just never get consistent long-term performance out of the replacement batteries. Later, I moved on to the Coast HP7 flashlight. I liked its solid build and focusability / adjustability. It’s still a strong performer which I use regularly. My latest favorite though is the M7R that Led Lenser sent us to put through its paces. The Led Lenser M7R is so full-featured, it makes other modern flashlights look like glorified torches (the kind that you burn, not the British kind).

I have used the Led Lenser M7R flashlight for a variety of purposes, including (but not limited to):
Keeping my family and I from being run over on the mean streets of San Diego
Late night mosquito hunting
Lighting up boats in the harbor (possibly terrifying drug-runners in the process)
Domestic security checks
General household use

Additionally, my two and a half year old has gotten her hands on it and temporarily blinded all other family members. Let me start off this review by saying this flashlight is not recommended for toddlers, unless they happen to be thwarting an intruder.

The case that the M7R comes in is what you might expect to find bundled with a high-end firearm. It’s solid, with a thoughtfully laid out interior. The case is so nice, I was almost tempted to use it. Instead, I like to keep my flashlight handy and accessible, so a case didn’t make much sense for me. So, if you’re the type that likes to travel with your flashlight secured in a svelte, custom case, you’ll be thrilled with the case the M7R comes in. For everyone else, just stash the flashlight in a conveniently accessible location where you plan to use it.

Part of the reason for the case is to house the extensive array of accessories that come with the M7R. Wrist strap? Check! Belt clip? Check! USB Charging cable? Check! Adapter to AC voltage? Check! Charger mounting bracket and hardware? Checkity-check-check! It even has a fancy “Led Lenser” velcro band to secure excess charger cable. This is my kind of flashlight kit! 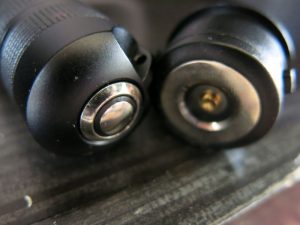 The Led Lenser M7R sports what is without question the most thoughtfully-designed, user-friendly charging system we’ve ever seen in a flashlight. They call it the “Floating Charge System.” Although you can charge the flashlight several ways, by far the coolest way is with the optional bracket and with the magnetic, floating charger. The button that activates the light is also ingeniously designed to conduct charge via the metal center and outer ring. When you mount the bracket vertically, the floating charger locks into the top of the bracket. To charge the light, you simply get the button side of the flashlight close enough to the charger and it actually hangs in place.

A slick illuminated ring gives you sexy, visual feedback on the charging status. Red means charging. Green means fully charged. Green flashing is a measuring status where a totally discharged battery is being assessed. According to Led Lenser, this can take “up to 300 seconds”. . . or, as I like to call it, five minutes. Lastly, red flashing means the flashlight’s self destruct sequence has been initiated and you only have 30 seconds to be at least .5 miles from its blast radius. Or, it just means there’s a short circuit or it’s in the wrong position in the charging station.

The magnetic charging setup works great even if you don’t use the wall mount. The charging cable defaults to charge via usb, however an included right angle AC adapter lets you plug it into a regular wall outlet too. After using the M7R, plugging in a charging cable seems downright antiquated. Oh, and regardless of the mode you are in (more on that below), the flashlight will start blinking when you’re running out of juice.

Another aspect that makes the Led Lenser M7R a standout is the amount of technology that’s built into this beast of a flashlight. In fact, the light is so smart, I actually had to study the manual. Not just read it, but study it. The programmability / functionality of the M7R is defined by two different light energy modes, three different light programs, and up to six different light functions. Confused? So was I. Anyone can use that flashlight right out of the box since the first button push in any mode results in bright light output, however if you really want to optimize and customize your use, you’ll want to read the manual (or this review) closely.

First, the two energy modes. The M7R offers either an energy saving mode, or a constant current mode. You cycle between these two my touching and slightly depressing the button eight times and then fully depressing it on the ninth time. If you’re in energy saving mode, the light will come on and then dim slowly to off in three seconds. If you’re in constant current mode, the light will come on and then switch off rapidly in three seconds. The manual goes into much more detail, but basically energy saving mode gradually dims the light output in favor of preserving battery power. Constant Current mode keeps a more consistent level of light output, but then the graph (and light output) drops like a brick when your battery is running low. Since I’m usually using the light for shorter periods, I prefer the constant current mode to maximize performance. However, if I were on a camping trip or another extended use outing, I’d likely switch to Energy saving mode.

Next up, the three light programs. Light Program 1 (Professional), let’s you cycle between full bright, low power, dim, blink, SOS, and defense strobe function. I like this program the best since it sports the most options. Light Program 2 (Easy), cycles only between full bright, low power and dim. Lastly, Light Program 3 (Defence), has just full bright and defense strobe. To switch between the programs you lightly depress the button four times and then fully depress it on the fifth. The flashlight will then blink the number of the program (1 for Pro, 2 for Easy, 3 for Defense).

Luckily, Led Lenser includes a small business card-sized “smart card” which serves as a cheat sheet for navigating the complexities of the M7R’s many functions. After reading through the manual and referencing the smart card, switching between the various modes and functions became second nature, but still not quite as simple as a traditional on/off switch.

Assuming you’re holding the light the way most people do (bulb end closest to your thumb and forefinger), the Led Lenser M7R delivers on its promise of true, one-handed focus. The focus adjusts from a laser-esque narrow beam to a broad circle of even light output. A twist left or right on the focus ring locks or unlocks whatever focus setting it’s on. The focus mechanism is fast, precise and highly useful depending on the lighting task at hand. The broad beam creates a uniform circle of light that evenly illuminates a large area. The narrow beam cast a much smaller, but intensely brighter beam great for focusing light a long distance away on a smaller target. Unlike other flashlights that have a focus function, there weren’t a bunch of annoying rings of varied light intensity – just nice consistent, even light levels.

Led Lenser quotes 40-400 Lumens, which shines 100-280 meters, with an impressive runtime of 4 hours to 40 hours. The light is also IPX4 rated, which I would characterize as splash resistant. I found the quality of light to be not only very crisp, but also impressively powerful. My favorite test was shining it out over a portion of San Diego bay and lighting up docked boats in the distance. The beam looked more like a gas powered search light than a battery operated flashlight. Performance of the M7R did not disappoint.

While it may sound like I’m head over heals in love with the M7R, that doesn’t mean it’s perfect. One thing to be aware of is that the flashlight is designed completely round, which means it tends to roll off surfaces easy. If that bugs you as much as it does me, believe it or not, Led Lenser makes an optional anti-roll ring accessory that can be put on the flashlight. Personally, I’d rather see a flat surface built-in to the design of the light to begin with. The number of options are numerous enough to confuse or intimidate some users. I eventually came to like the flexibility once I was properly “trained” by the manual and “smart card.” My only other complaint on the light is that the button design is a little narrow. While this has an advantage of avoiding accidentally depressing the button, it also makes it a little trickier to activate. Users with gloved hands will find this issue even more of a drawback.

Even with those relatively minor caveats considered, the Led Lenser M7R is a top-notch flashlight. There are few things I like more than a well-engineered, carefully-crafted product that also performs great. The Led Lenser meets all those criteria in spades. Build quality both looks and feels exceptional. At around $140, this isn’t your semi-disposable LED flashlight. However for those that want only the best gear, the Led Lenser M7R is a serious contender in the realm of higher quality flashlights. 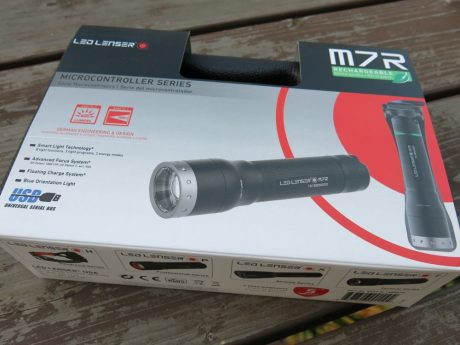