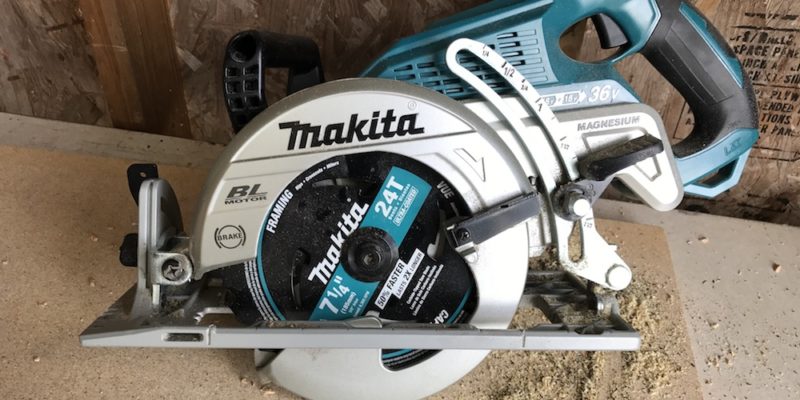 One of the first power tools I ever purchased was a Black & Decker circular saw. That was a LONG time ago, and there have been many tool purchases since then, but that saw helped ignite my passion for tools, and saw a lot of use over the years. A circular saw is one of the basic workhorses in any tool collection, and whether you’re a DIY homeowner or working in the trades, power and reliability are key. It used to be a given that to get a full-powered saw, there had to be a cord attached. Recently, we received a teal-colored Makita XSR01Z cordless saw that aims to change all that. Let’s see if we can eliminate yet another cord from the job site.

The saw’s official designation is the Makita XSR01Z 18V X2 LXT® (36V) Lithium-Ion Brushless Rear Handle 7-1/4” Circular Saw. That doesn’t exactly trip off the tongue, so we’ll be referring to it as the Makita XSR01Z. And you’re right – that’s not very catchy either, but it’s a helluva lot shorter.

The Makita XSR01Z is powered by two Makita 18V LXT Lithium-Ion batteries, hence the “18V X2” in the official title. Makita has several tools in its 18V X2 lineup, including the recently-reviewed beast of an angle grinder, a chainsaw and several OPE tools, and a traditional circular saw. Their decision to go the X2 route provides power-hungry tools with an added boost, and allows users of their regular 18V tools to remain on the same battery platform.

When I saw a picture of the Makita XRS01Z before it arrived, my first thought was “Hmmm – that looks like a cordless worm-drive saw!” With its handle on the rear and blade on the left, the saw has definite similarities to a worm drive saw. ‘Tain’t so. In a worm drive saw, the motor sits in the rear, and the power is transferred through two gears set at 90° to each other. This makes the saw a fair bit slower than a direct-drive “sidewinder” circular saw, but provides a lot more torque.

In the Makita XSR01Z, power is transferred to the blade through a set of helical gears. This allows the saw to run almost 1,000 RPM faster than the typical worm drive saw, while still cranking the torque. Makita’s gear design, combined with the soft-start feature on the saw, also means the saw doesn’t torque to the side on startup, like most worm-drive saws do.

If you’ve ever used a worm drive saw, you know they’re a good bit heavier than the average sidewinder. While the Makita XSR01Z isn’t light, at 12.4 lbs. (including batteries) it’s not much heavier than an average sidewinder, and it’s lighter than most worm drives. Makita kept the weight down by using a die-cast magnesium base and blade guard, and a die-cast aluminum blade cover and motor housing.

The BL™ brushless motor in the Makita XSR01Z is electronically controlled. This allows it to match torque and RPM to the task at hand, with a top speed of 5,100 RPM. If the little electronic brain senses that the saw is struggling with dense material, it slows the RPMs a bit and increases torque. The mode indicator on top of the saw lights up when the tool is running in “high torque mode”. And when any cut is finished, a blade brake stops the blade almost instantly.

Over the past several months, I’ve had the chance to use the Makita XSR01Z on several projects. I’ve used it for everything from framing walls to cutting up a bunch of lumber from a barn demo. One of the first missions for the saw involved swapping the teal blade for a red one, while we were evaluating the Diablo Demo Demon blade. I used the Makita to cut through 100 16D nails closely embedded in a 2X8”.

I also used the Makita to make rip cuts through a test section of roofing with 1” of plywood topped with shingles, and the saw sailed right through. The saw was easy to control, even one-handed.

I wanted to see how well the saw would do under the toughest conditions, with the blade fully embedded in lumber. I took a wet, pressure-treated 4X4 with a couple of embedded lag screws, dropped the blade to its full cutting depth, and used the saw to make several passes end to end, including one with the blade set at 45°.

The Makita XSR01Z ripped right through everything, including the lags, with no trouble. On the final pass, it stalled a couple of times, but with slightly less pressure finished the cut with no problem. All the cuts were made without resting the saw, and without fully-charged batteries.

Thoughts And Impressions On The Makita XSR01Z

Spoiler alert: The Makita XSR01Z is a beast! The saw handles very well; it’s easy to control, and the ambidextrous safety is easy to use. The handle positions, and rubber overmold on the rear handle, make the saw comfortable to hold. My sidewinder saws all have the blade on the right side, but after getting used to the left-side blade, I like it a lot. Speaking of the blade, changing it is fast, easy and intuitive. Just be aware that if you’re mounting a standard circular saw blade, you’ll probably be putting it on with the label facing inward. Just make sure the teeth at the bottom of the blade are pointed toward the front of the saw.

Setting the bevel is simple, too, and the button for positive stops is handy. The bevel pointer is precise and easy to see. While it’s not a huge deal, as the owner of a set of crappy old-guy eyes, I wish Makita had highlighted the numbers on the bevel scale like they did on the depth of cut scale. No biggie; I’ll fix it with a fine-point Sharpie…

Along with electronically adjusting torque and speed to match the saw’s usage, the Makita XSR01Z has some protective features built in to safeguard your investment. If the tool senses abnormally high current draw, for instance from someone persistently cutting wet pressure-treated lumber at high speed, it will shut the saw down. Just release the trigger and back off a bit, buddy, and the saw will resume working.

There’s also protection from overheating. If the saw is used constantly, and it’s 100° out, the Makita XSR01Z will not be amused. It will shut down, and the indicator light will blink for about a minute. Take a break, and let the saw cool down, while you daydream of cool breezes and a cold frosty beverage. While the batteries recharge, you can hang the saw in the shade using the large, sturdy hanging hook. During all of our testing, the saw never overheated.

To protect the batteries from over-discharge damage, the saw will also take a break when the charge level on the batteries gets low. If the saw suddenly stops, and everything else seems good, check the charge level indicator on top of the saw, or on the individual batteries. A handy set of indicators on top of the saw helps decipher problems, and shows battery charge for each battery.

The Makita XSR01Z will run a long time time on a freshly-charged set of 5.0 Ah batteries. The saw will power up using any two Makita 18V Li-Ion batteries, but as is often the case, bigger is better, and 5.0 or 6.0 Ah batteries are recommended.

Will The Makita XSR01Z Worm Its Way Onto The Job Site?

When we tested the Makita XSH01 sidewinder circular saw a few years back, there were just two things I dinged it for. The first was the fact that it didn’t have a brushless motor, the second was the fact that Makita didn’t offer a dual simultaneous charger, something I thought was a real drawback for anyone trying to promote a line of tools that take two batteries.

Obviously, the engineers in the teal lab coats at Makita appreciated our sage advice. Exhibit one: The beefy brushless BL motor in the Makita XSR01Z. Exhibit two: The sweet Makita DC18RD dual charger that comes with the kit, which – wait for it – simultaneously charges two 18V Li-Ion batteries, fully charging two 5.0 Ah batteries in only 45 minutes. As a bonus, it will also charge Makita Ni-MH 7.2-18V batteries. As a bonus bonus, there’s also a USB port, so you can keep your phone charged, or your MP3 player crankin’ out the Yanni or AC/DC.

With its beefy – and brainy – brushless motor, good ergonomics, and all-around brawn, the Makita XSR01Z is likely to be a VERY popular saw. It’s faster than a worm drive saw, and more powerful than pretty much any circular saw out there – and many worm drives. The saw has plenty of power to be the primary saw on the job site. The only issue, on sites where there’s constant cutting, would be battery life.

The 5.0 Ah batteries can make a LOT of cuts; using them in internal testing, Makita got up to 558 cross-cuts per charge in 2×4 SPF lumber, and up to 291 cross-cuts per charge in 2×10 SPF lumber. Still, having to shut down a busy site for 45 minutes to recharge batteries would not make for a happy crew; an extra set of batteries would be a prudent investment. If you’re thinking of investing in some, or you want to see what other deals Makita is currently offering, check out their promos page.

The Makita XSR01Z 18V X2 LXT® (36V) Lithium-Ion Brushless Rear Handle 7-1/4” Circular Saw (whew!) is available as a bare tool. This is great for someone already on the Makita 18V platform, who has at least a couple of good batteries and a charger. It also comes in the “Get to work right now!” kit, which includes the saw, two 5.0 Ah batteries, the dual simultaneous charger, and a stylin’ teal bag to schlep it all around in. Makita backs everything with a three-year warranty. Try one out, and in the infamous words of Devo, Rip It – Rip It Good. 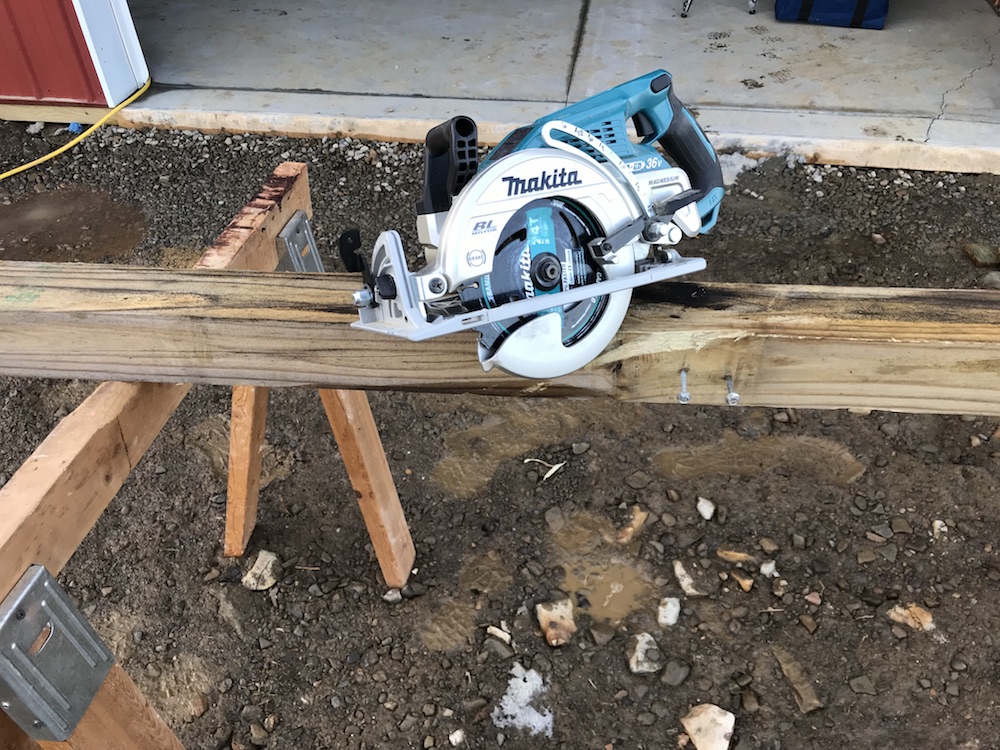 Get the bare tool Makita XSR01Z from Ohio Power Tool for just under $200:

Makita XSR01PT Kit from Ohio Power Tool for around $360: