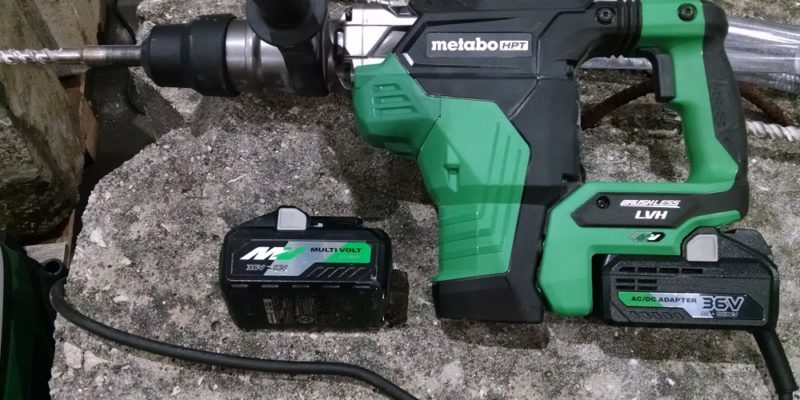 Earlier this year we covered new tools from Hitachi and included a mention that the Hitachi Power Tools name would be changing. Well now it’s official. There will be no more Hitachi branded power tools, nailers, or fasteners made. Instead, the products henceforth will be branded Metabo HPT in the USA and Canada. In Europe, Asia, Mexico, and the rest of the world, Hitachi switched the name to Hikoki Despite being a logical portmanteau of Hitachi Koki, the second half of the Hitachi name was not well known in our market and the name didn’t test well here. Thus the adoption of the Metabo name with the acronym HPT attached.

NO, HPT doesn’t stand for Hitachi Power Tools. Rather, High Power Tools. But for now, the new brand isn’t unhappy with that coincidental assumption (wink wink).
NO, the “high power” designation doesn’t imply that these tools are all stronger than the tools from the original Metabo brand, and…
NO, this doesn’t mean that there will be any cross-compatibility between the cordless systems of the two tool brands. Both will continue to operate as separate competitor brands in the market.
NO, we’re not sure if this shared name will provide any obstacle to Metabo continuing to grow their brand in the US or for Metabo HPT (the brand formerly know as Hitachi) to launch theirs.
YES, all of the Metabo HPT products will be the same as those bearing the Hitachi name now.
YES, this whole change does seem confusing at first, but read on. 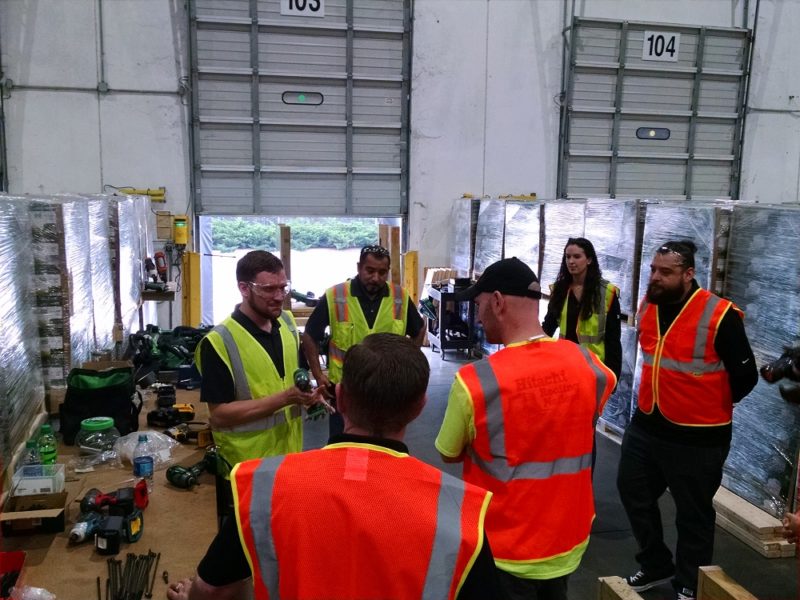 It breaks down like this. Hitachi Koki was the power tool division of the giant Hitachi parent company, both based in Japan, and it represented about 1.8% of Hitachi’s overall business. A few years back Hitachi Koki bought the German tool manufacturer Metabo. Then the investment firm KKR bought Hitachi Koki from the Hitachi parent company. So, the head office for both tool companies is still in Japan and is now called Koki Holdings Co., Ltd. Metabo continues to be based in Germany and is run as its own entity with its own product line. The Hitachi tool brand had some time to keep using the Hitachi name before the price to license the name jumped, so that’s why they are rolling out this name change now, quite a while after they were acquired. Their brand name of choice for the USA and Canada is Metabo HPT, and HiKoki for the rest of the world. Simple, right?!

What does that mean for the end user? Not much. They just have to remember the new name. But dealers and the manufacturer alike have the task of informing new and uninformed repeat customers that the Hitachi tools they rely on will be found bearing another name. Luckily, Metabo HPT will be able to use the word “Hitachi” in their signage and ad copy for a few more years. So it won’t be up to the distributors to take marker and posterboard in hand to make point-of-purchase signs to educate the contractors who cannot find their trusted Hitachi nailers and nails on the shelves at their local supply house. Plus, it might take several months to sell through all of the existing Hitachi product stock, so it will be a rolling change with both brands appearing on cartons side by side on the shelf at some point. 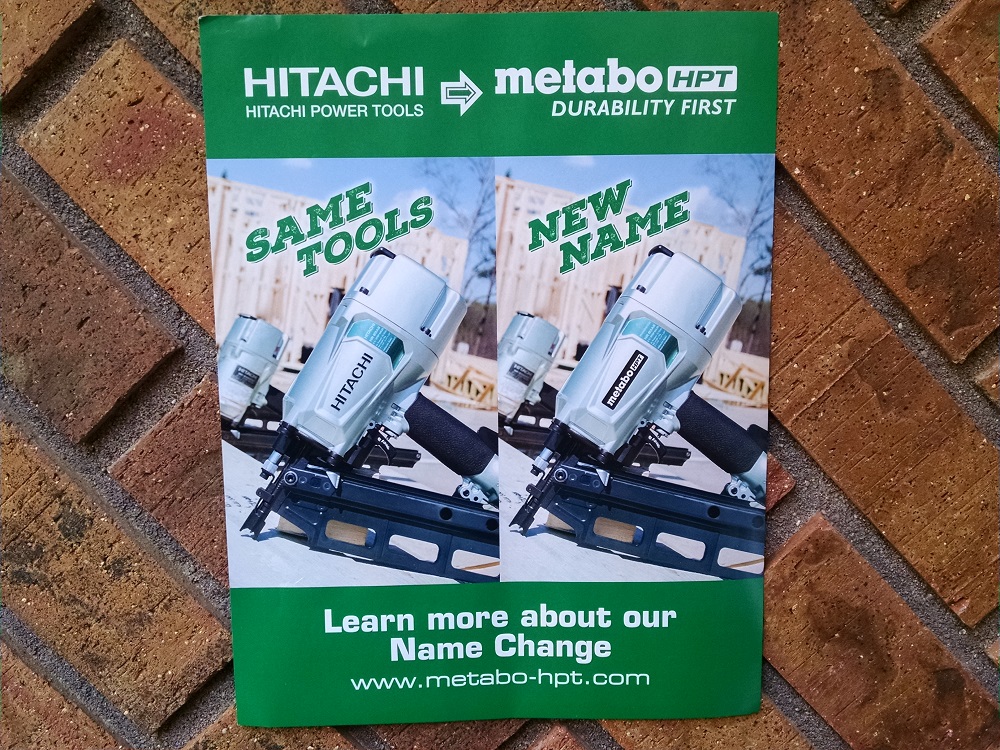 So after assuring you that after the big change, nothing’s actually changed, here’s the skinny on the first ever Metabo HPT tools.

The brand new twist is that the 36-volt tools are also compatible with AC line power. That’s right, run them on battery packs or on 120V AC juice, fresh from a wall outlet. It may seem like a step backward to plug a cord into a cordless tool, but in two common scenarios, this ability would come in very handy.

1.) You run out of charged battery packs on the job. Instead of waiting on the charger, just plug in and keep working.
2.) You’re using the tool at a fixed workstation with easy access to a cord or outlet. No need to run through your battery packs all day, just plug in. A good example is working at a cut station with a miter saw or table saw.

Running the tools on AC power requires the ET36A adapter ($150) which consists of a dummy battery pack to interface with the tool and a 20 foot cord with a transformer 5 feet from the plug end. For the time being, any MultiVolt tool purchased will come with the buyer’s choice of the adapter or a 36-volt battery pack. So the tool prices mentioned in this article include one of the power sources. 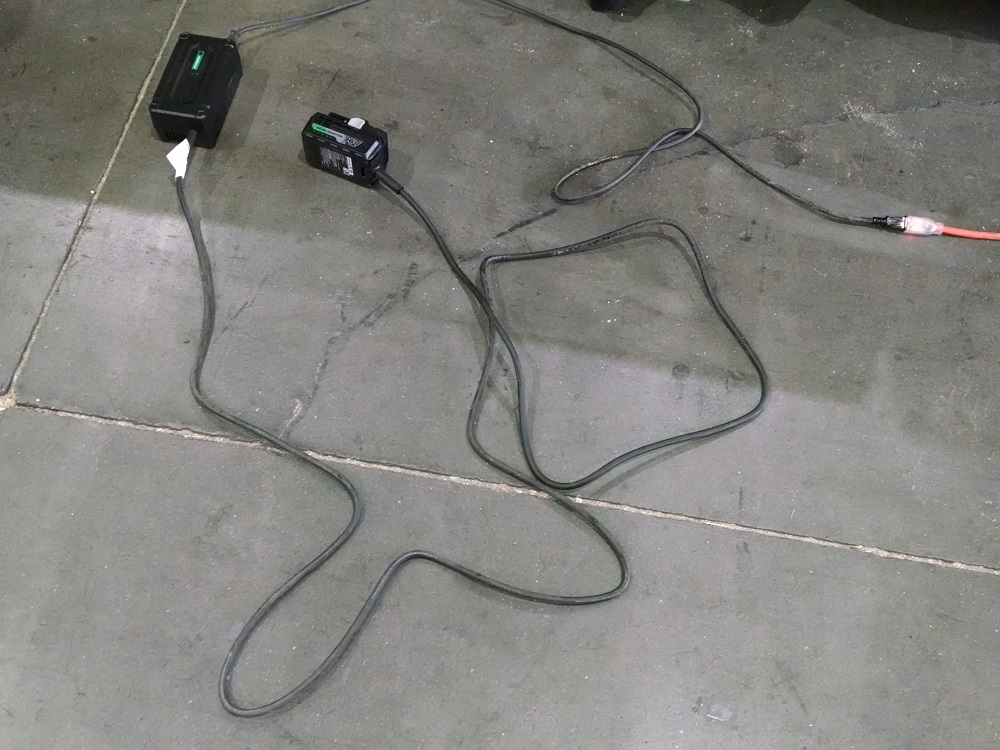 And unlike many brands who attract you with the tools and let you find out later how expensive replacement battery packs are, Metabo HPT actually uses the affordability of their packs to help attract customers to their cordless system. 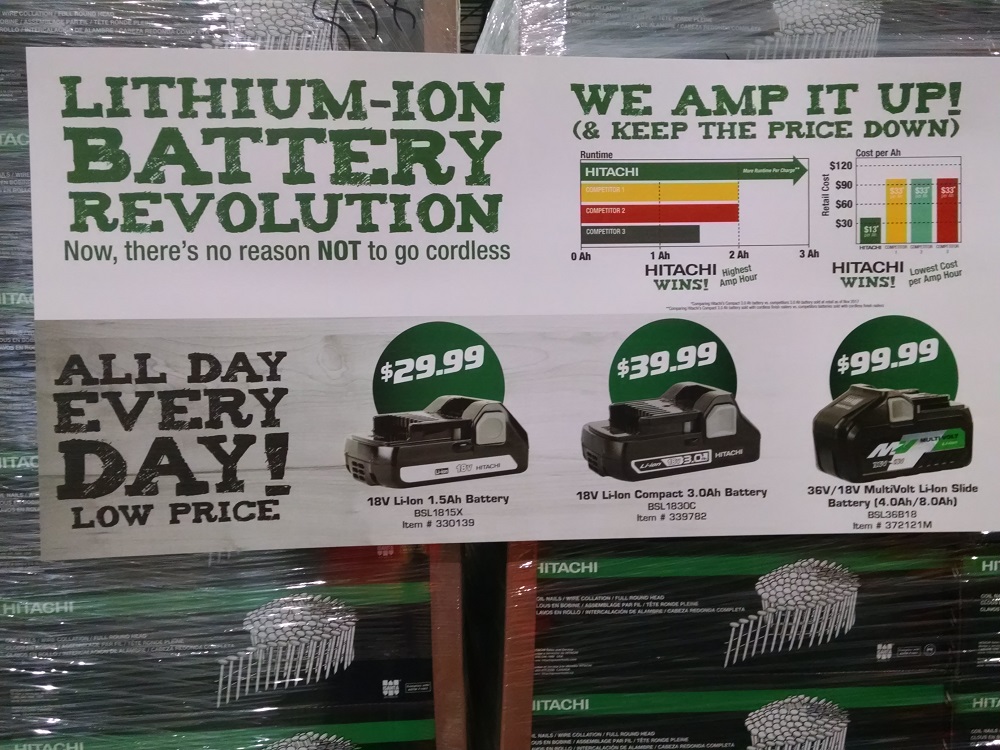 Circs, and recips, and tables, and miters – oh my! Wood cutting tasks can demand a lot of power so Metabo HPT is introducing a full complement of 36-volt saws.

The C3607DAQ4 circ saw ($359) features a 7 1/4-inch blade and a unique Auto Mode that runs the blade at a slower rpm for low-demand cutting and then ramps up to full speed when the load increases. Quieter cutting and longer battery runtime is the result. 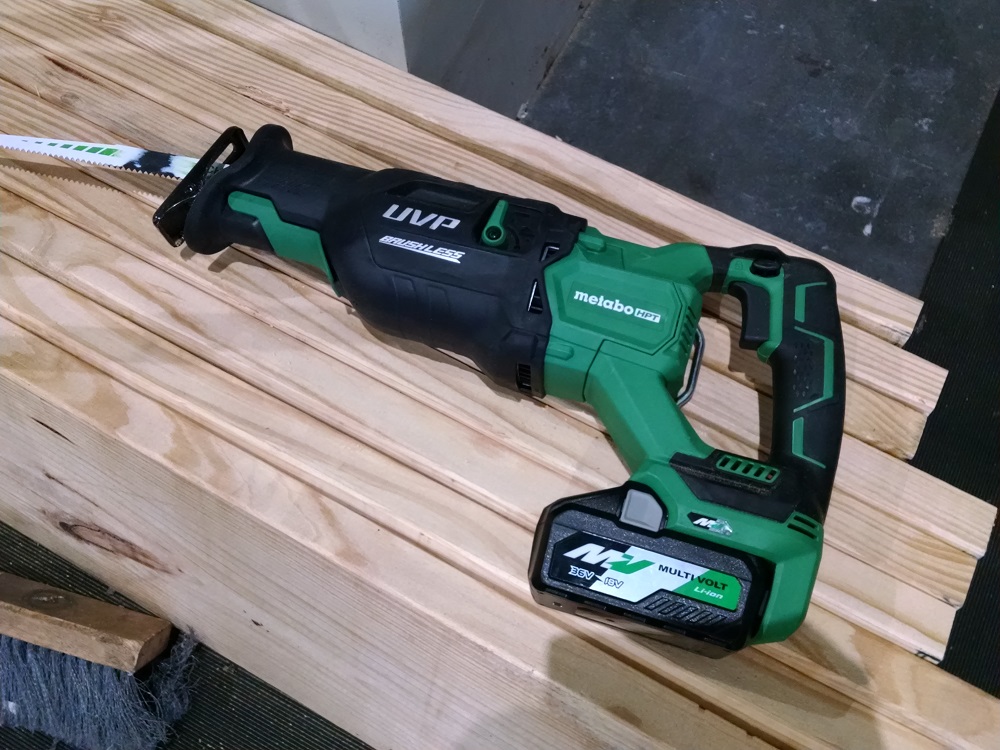 Cordless table saws are in their infancy relative to other cordless tools, and of the few on the market, the Metabo HPT C3610DRJ is the first we’ve seen with a full-size 10-inch blade. For stationary use on a job site with power, the ability to plug this MultiVolt saw into an AC outlet makes a lot of sense, and provides you the flexibility to own just one contractor table saw for both portable and shop uses. 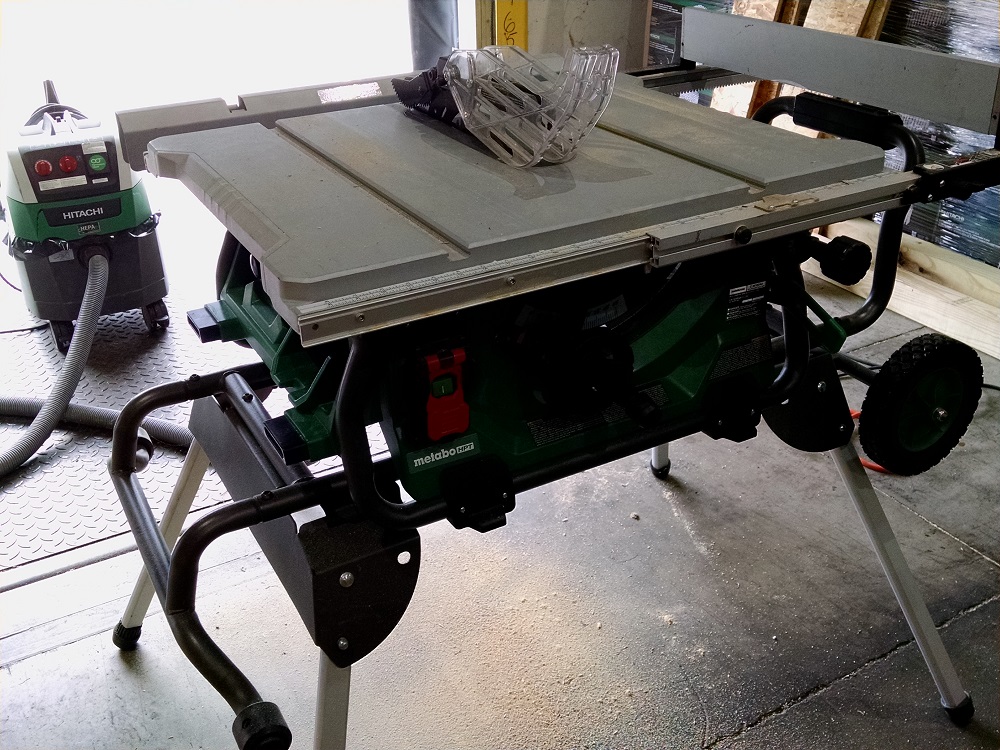 Miter saws that run on battery packs have become mainstream, and Metabo HPT has two new models. The C3610DRAQ4 10-inch dual bevel slider ($619) features all up-front adjustments and a laser that can be user calibrated in two planes for lasting accuracy. 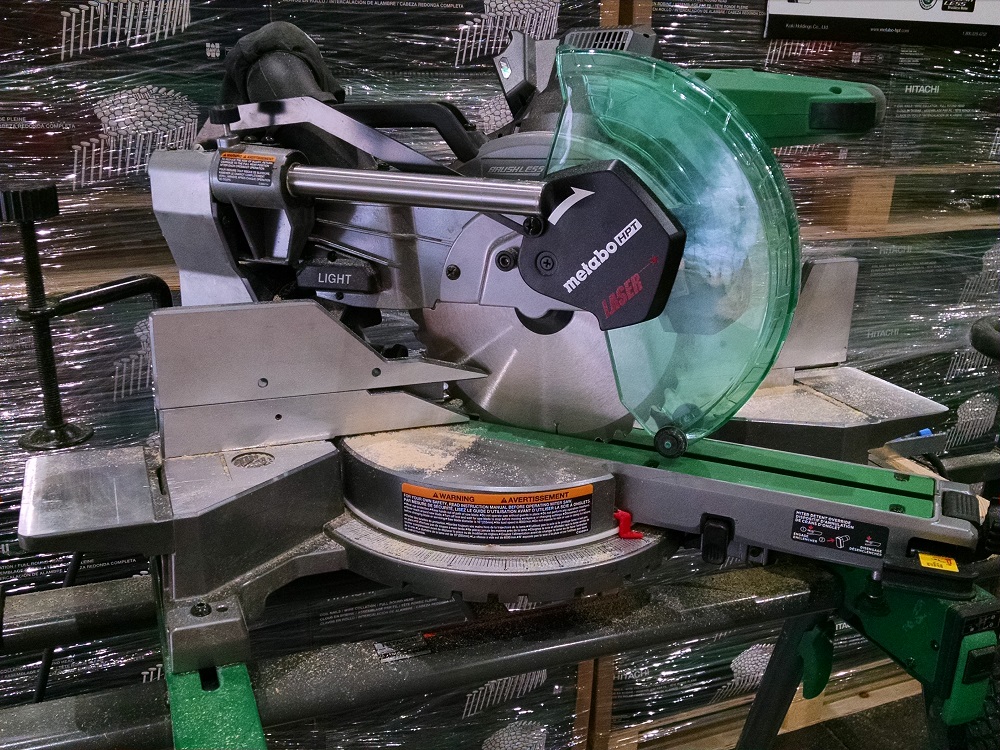 The second new model has been described as a “Japanese-made, high precision miter saw”, and it might take a little longer than the other tools to make the long journey all the way to our shores. Though the C3607DRA is a compact, 7 1/4-inch blade slider, it’s expected to retail for $1,100 when it arrives. It will be interesting to see who a small saw with a big price will appeal to. 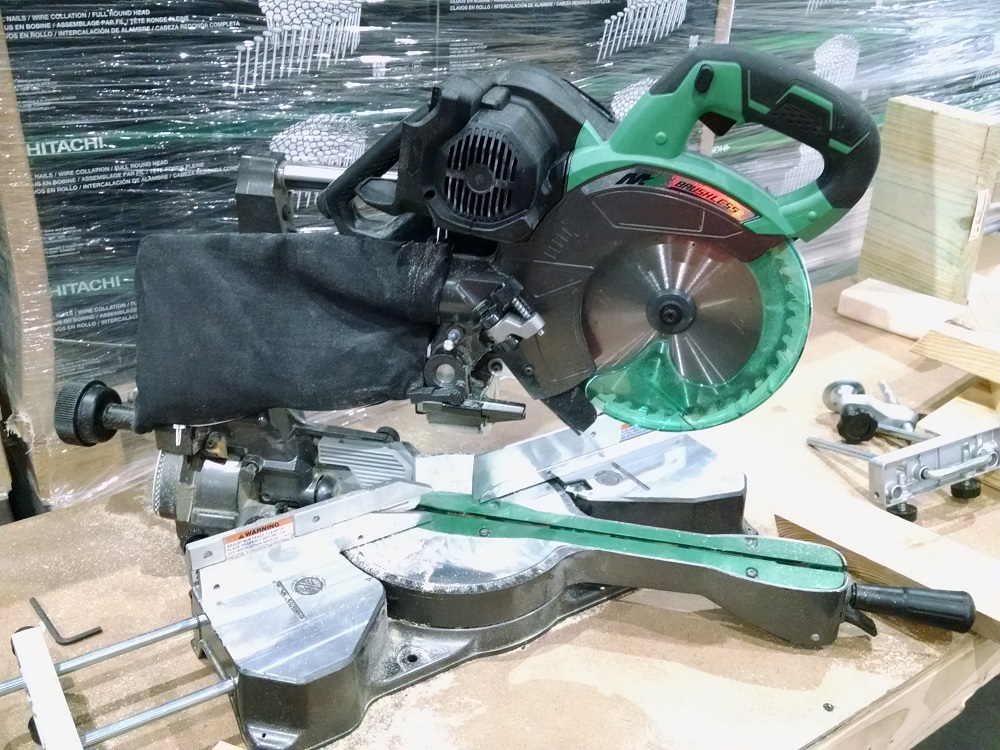 Metabo HPT’s WH36DBQ4 Triple Hammer impact driver ($379) is coming out in a 36-volt MultiVolt version and will be sold alongside the existing 18-volt tool – it’s not a replacement model. Besides having three hammers for a series of faster hits, the Triple Hammer also has a unique power mode that skips every other hammer for a bigger windup and hit when needed. So the tool can switch from from 60-degree swings to 120-degree swings, versus a standard impact driver’s 90-degree swing only.

We’ve certainly seen a rise in size and force output from impact wrenches in the last few years, and now it seems like pneumatics won’t be needed except for the very largest fastening jobs. The new MultiVolt wrenches – WR36DBQ4 and WR36DAQ4 ($449 and $499) – are available in 1/2- and 3/4-inch drive sizes, and rated up to 1,218 and 1,328 ft-lbs of loosening torque respectively. The driving torque numbers are 775 and 812 ft-lbs. 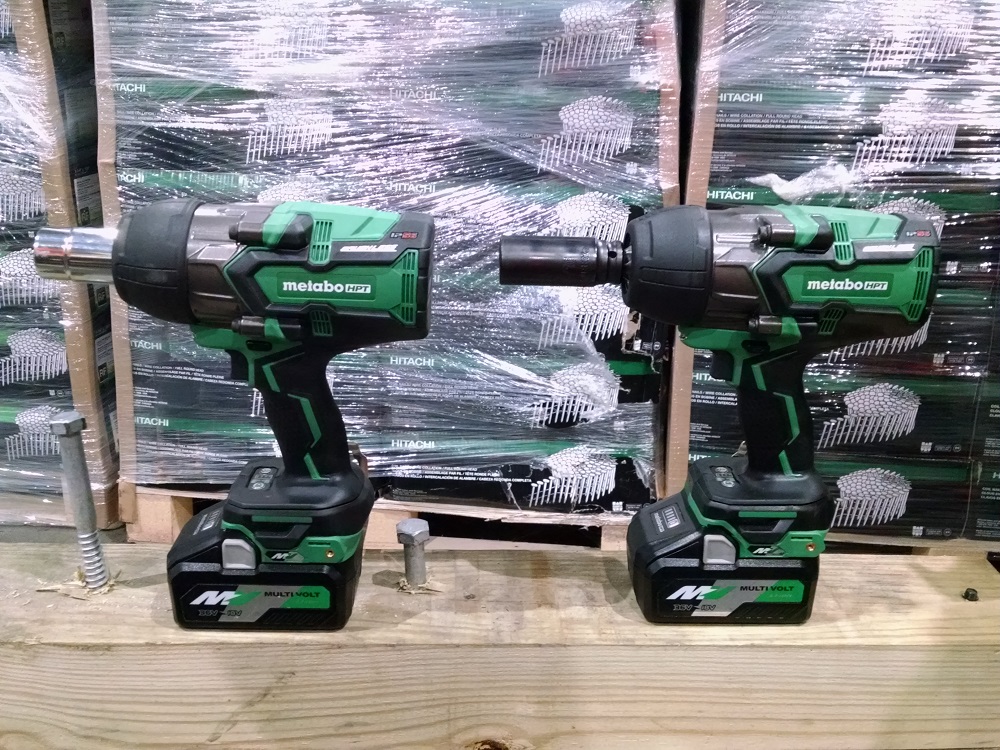 Like table saws, SDS Max rotary hammers are a competitive segment within the cordless tool market, and there aren’t very many of them yet. The 1 9/16-inch-class DH36DMAQ2 hammer ($749) works in hammer drilling or chiseling mode and has an electronic switch that lets you select from four different rpm/bpm modes for finer control. 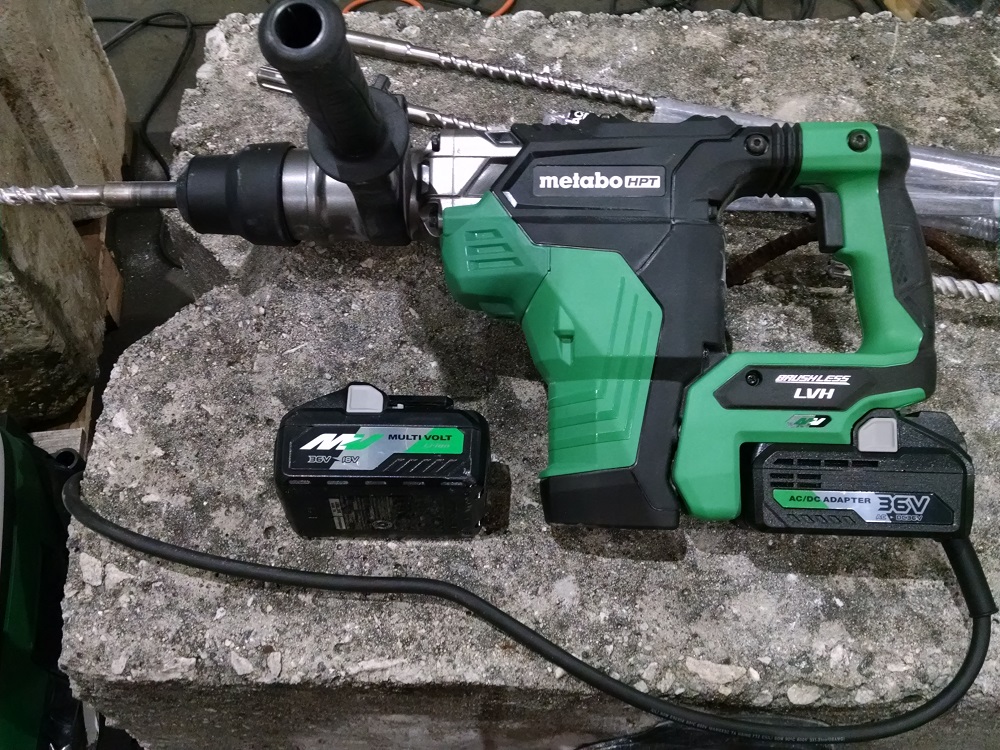 A new hammerdrill/driver DV36DA ($359) and 4 1/2-inch paddle and slide switch angle grinders (G3612DBQ6 and GD3612DAQ6, $359) round out the Metabo HPT MultiVolt cordless tool line. The grinders have a unique Auto mode setting that allow the tools to change the power output to keep up the optimum rpm under load by managing the current draw from the batteries.

Though Metabo HPT’s battery powered nailers are all 18-volt models, they can also be run with the larger MultiVolt packs for greater runtime. However the bigger packs aren’t necessary to get maximum output from the tools – even the 3 1/2-inch framing nailers come standard with compact 3.0 Ah 18-volt packs and work great that way. The battery nailer line is mostly complete, with 20- and 30-degree angled framing nailers, 15-ga. angled and 16ga. straight finish nailers, an 18-ga. brad nailer, and a 23-ga. pinner. But it would be nice to see medium and narrow crown staplers added, and perhaps an angled 16-ga. finish nailer.

Pneumatic fastening is still alive of course, and a major part of the old Hitachi/new Metabo HPT sales in the USA. A good reminder of that are the refreshed models being added to the manufacturer’s top-of-the-line, professional A5 series. Along with 2-inch capacity 23-ga. pinners and 18-ga. brad nailers, there is also a new heavy-duty 2 1/2-inch, 16-ga. trim nailer. More robust than the average model used in the shop, the sturdy build and large rafter hook are designed with exterior wood, PVC, and fiber-cement trim applications in mind.

Stay tuned to HomeFixated.com and our social channels for all the latest and greatest tools from Hitac. . . errr, Metabo HPT and more! 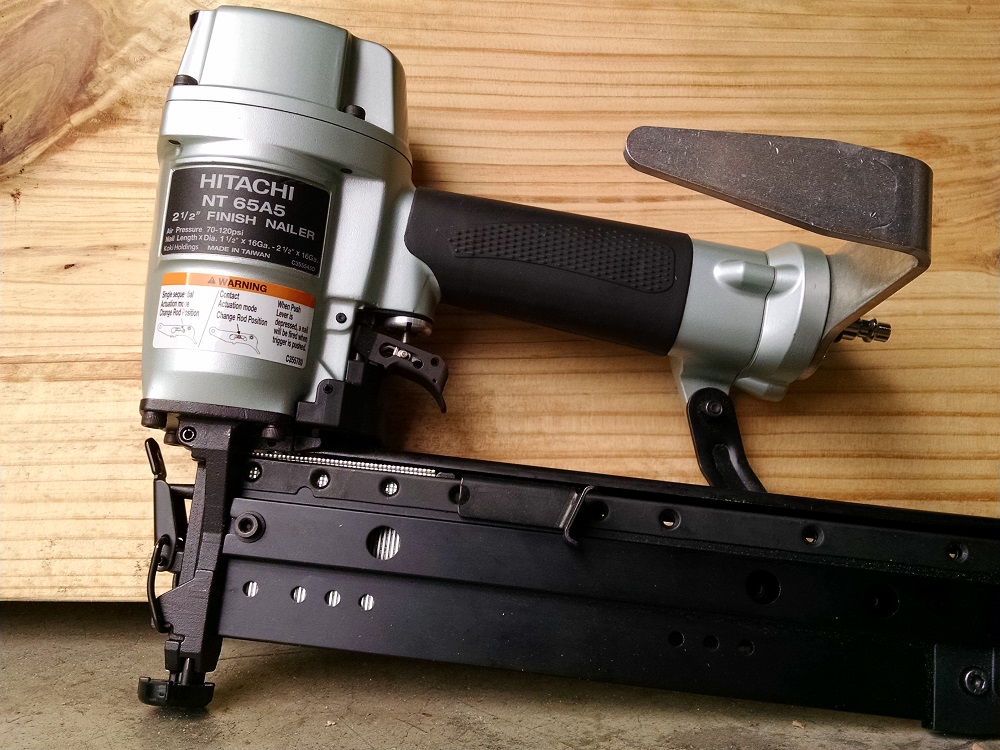