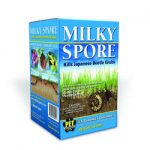 If you’re eating or drinking a dairy product, it’s probably best that you either put it down or come back to this blog when you’re finished. Why? Because the more I hear the term “milky spore”, the more I’m turned off by the thought of moo juice.

Milky spore, also known as Paenibacillus popilliae (but only its mom calls it that), is a bacteria that is lethal to the über gardening pest, the Japanese Beetle. The Japanese Beetle is most definitely not what you want in your garden or lawn. It and its larvae have a voracious appetite, munching on pretty much everything from roses to tomatoes to strawberries to herbs and have infested a large portion of eastern United States and Canada. Thankfully, Milky spore is available for purchase under the St. Gabriel Organics brands. Here are the deets:

St. Gabriel Organics Milky Spore is available in a powder form. You take about a tablespoon of it and dump it in a pile on your lawn or garden. Keep dropping these tablespoons of the milky spore in a grid formation so that each is four feet from the other. Use a stick or pole to drive the powder into the ground. Water each spot and let it get to work. The spores are eventually swallowed by unsuspecting grubs. The bacteria does its magic, gestates in the grub and eventually causes its death. Billions of new spores then get released into the soil to be eventually eaten by other Japanese Beetles. Within seven to 21 days, your garden should be a Japanese Beetle graveyard. Even better, the spores are extremely hearty and stick around, even in cold temperatures, so you don’t have to reapply the powder. Many who use this technique have reported that they’ve had Japanese Beetle-free gardens and lawns for 15 years after just one application.

green pesticide (good for an area of about 2,500 square feet) for under $20. Also available in a number of different sizes.