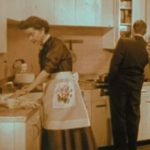 Want a new kitchen? We might have found a way (not to finance it, of course, but a way to convince Mr. or Mrs. Pursestrings it’s a must-have). In taking on a new project, I came across this old clip from 1955 called, “A Word to the Wives.” This film, sponsored by American Gas Association, National Association of Home Builders, The Woman’s Home Companion and Old Timey Gender Roles, is about a pair of women who plot to convince a husband that a new kitchen is needed ASAP. It’s also a nice look at some of the conveniences we take for granted and other kitchen gizmos that have gone the way of the dinosaur (automatic flour dispenser? Gas garbage disposal? Housewife?):

One weekend of having to fend for himself can apparently net you a custom-designed house. Makes you wonder what she could have gotten for herself if she was gone for a week. My money is on a robot. And maybe a jet pack.

So, it begs the question: Would this technique of forced covert empathy work in modern times? Try it and let us know how it works out for you.