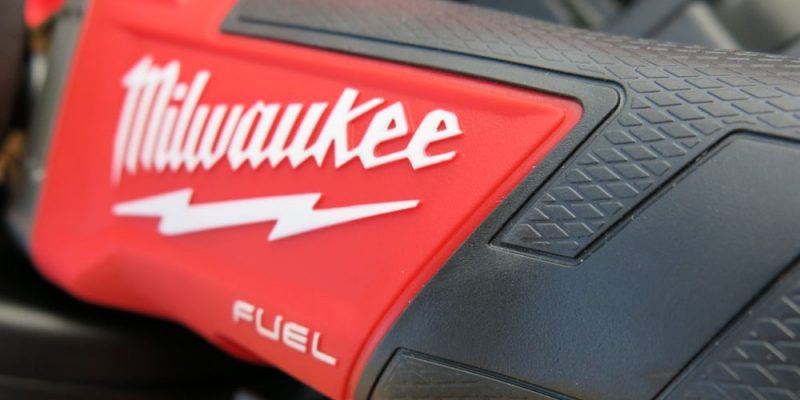 Brushless motor technology and the supporting battery and high-tech circuitry and wizardry that accompany it continue to challenge our beliefs about what jobs a cordless tool might be appropriate for. Grinders are a tool that have a reputation for wreaking havoc on some of the hardest materials you’ll find on a jobsite: steel and concrete. Up until now, that reputation has been reserved for corded models. Those traditional corded grinders better start looking over their shoulders. The new Milwaukee M18 Fuel Grinder is dazzling the grinder market with showers of molten metal and stellar, corded-like performance.

We first got our hands on the Milwaukee Fuel Grinder at a media event circa the summer of 2013. There, Milwaukee put several of their cordless grinder competitors alongside the new Fuel Grinder. The competitive tools were thoughtfully painted grey to avoid any brand-specific public humiliation. Our task was to test each grinder out on a sheet of steel and really bear down on the tools. That’s right, it was a grind-off!

I started with the various competitive models. As soon as I applied my hulk-like force to them, their overload circuitry almost immediately kicked in and shut off the tool. This promised to be the shortest grind-off I had seen since high school. The quick raising of the surrender flag on the various grinders was making me feel like a powerful tool slayer. Lastly, I grabbed hold of the Milwaukee Fuel Grinder, (not surprisingly Milwaukee left this one painted red). Sometimes it’s secretly fun to see when things go wrong for the host of a media event. I decided it was time to make that happen. I wasn’t going to baby this Milwaukee grinder just because they were gracious enough to invite me to another media event. No. I was going to drive that Fuel grinder so hard it would slow to a sad, painful, and humiliating circuit overload.

Not surprisingly, the Fuel Grinder just kept on grinding. I tried to kill it, but it just kept happily spinning away, hardly noticing the brute strength that brought it’s competitors to their knees instantly. Dammit you Fuel Grinder! I had hoped to finally create an awkward moment, where I could watch a Milwaukee product manager like a deer in headlights, try to explain why their tool failed. Instead, I was left with the same impressed feeling I had with the Fuel Sawzall and Fuel Circular Saw.

Sure, Milwaukee’s new Fuel Grinder kicked some serious butt at the media event, but that’s on Milwaukee’s turf. I was committed to seeing how it held up on HomeFixated’s turf. Actually, more specifically, some turf that may or may not have been public property next to my daughter’s school. Allow me to set the story here, and I promise I’ll get back to the grinder, OK?

My daughter’s school, like many others, becomes a mad frenzy of students, parents, cars, and teachers at the end of each school day. Last year, I discovered there was a secret trail (shhhhhhh) that led from a nearby cul de sac down to a back gate right next to my daughter’s classroom. The beauty of this was very few parents dared dirty their shoes or risk life and limb navigating some of the trail’s perils. One such peril was what appeared to be the remains of an ancient steel fence post. The steel that protruded from the ground was just high enough and perfectly placed to trip just about anyone not paying full attention (on a side note, the “not paying attention” applies to about 95% of people since they’re all busily buried in their smart phones).

One of the other trail-savvy parents was a carpenter buddy. While we were waiting for the bell one day, he said something along the lines of, “Marc, too bad none of those fancy cordless tools you review has the XXXXX to grind off that fence post / tripping hazard.” Those were of course fighting words, and my weapon of choice was the Milwaukee Fuel Grinder.

So, one fine Saturday, I pitched the covert ops idea to my daughter. In her six year old wisdom, she said the whole idea sounded a little sketchy and might ultimately involve some prison time. I assured her we were doing a public service and that the chance of arrest for vandalism / trespassing / criminal mischief / violating neighborhood noise ordinances, etc. was well under 50%. She seemed unconvinced and said, and I quote, “If we get busted, I’m saying the whole idea was yours and that you forced me to go with.” With the tone set for a great father/daughter tool test, we hit the trail of doom, Milwaukee Fuel Grinder in-hand.

My daughter made quick work of digging around the steel pole so I could grind off the post below grade. Ahhh, child labor! With the post exposed and no cops in sight, I set the Fuel Grinder to work. “Work” might be a poor choice of words here. Despite multiple cuts (I had to take a couple passes at angles due to the tight hole clearance), the Milwaukee Fuel Grinder didn’t even break a sweat. No matter the angle or pressure, it just kept cutting through that steel. In fact the only thing that slowed me down was the potential to set the hill on fire with some molten sparks.

My daughter, a safe distance away, kept a lookout for the fuzz and was ready to yell “stop, drop and roll!” if my pant leg caught fire. Thankfully, our top-secret public service mission went off smoothly. The only signs the Milwaukee Fuel Grinder had done anything, was a layer of dirt and dust on the grinder, along with a one bar lower battery fuel gauge. My daughter covered up our handiwork, and the once trip-happy trail was restored smooth enough even for oblivious texting parents.

A few weeks ago, my family was set to head out of town for a week without me. Can you blame them? In a fit of delusional time estimation, I thought it might be a great time to “surprise” my wife with new hardwood flooring in the kitchen. Up until then, the kitchen sported a combination of ancient linoleum along with a large sheet of plywood where we had to cut into the floor on an earlier remodel. Classy, right? Sadly, in my delusional time estimation, I didn’t calculate in four days of demolition hell. Imagine 14 hour days spent clutching an oscillating multi-tool and scraper blade (the only thing capable of removing glued-down flooring that just didn’t want to go). I’ll cut this story short, but lets just say I’m still finishing up the project and the only surprise to my wife was more like, “surprise. . . we can’t use the kitchen for several weeks!” It didn’t quite go over as I had hoped.

Finally, circling back to the grinder review at-hand, after the demolition, I had to sand down a gnarly subfloor just to get it flat enough to install the new hardwood flooring. I did this mostly with a rented flooring belt sander and edge sander, but neither of those could quite get under some of the cabinet overhangs. After finding some Diablo Sanding discs, I decided to get some gritty discs and give the Fuel a shot at the job. This was more or less continuous-on sanding/grinding, with a whole lot of friction. Thanks to a couple 4.0 AH batteries in reserve, I was able to tackle the job with the Fuel Grinder. It was great not having a cord to mess with, and the tool had plenty of power to keep those aggressive sanding discs spinning. Even so, the project was a good reminder that a cordless grinder isn’t the solution for everything. If I had a bit more sanding to do, I would have run out of juice and been waiting on a charge.

The Fuel Grinder Features and Numbers 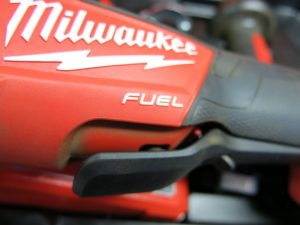 Overall, the Fuel grinder is hard to find fault with, but we did still find a few areas for minor improvement. Dust collection is still something of an afterthought when it comes to most angle grinders. While the kit comes with two guards, we’d love to see even a basic dust collection shroud included. In fact, if any other manufacturers are listening, an included dust shroud with grinder kits would be a welcome accessory to have on-hand. Speaking of guards, I found the two included guards to be a little stiff and awkward to work with. There may be a break-in factor that we haven’t experienced yet, but rotating and removing the guards was clunky. On the plus side, the rotation and removal/replacement is completely tool-free, which is great.

I also found the spindle lock button awkward to keep depressed. While having it recessed keeps the spindle lock out of the way, it also makes it not terribly ergonomic to hold in when swapping out your wheels. Lastly, we’d love to see a lower profile head design. We happened to be working in a couple tight quarter applications, so for most grinder applications this concern wouldn’t apply. However, when grinding in tight quarters, having a lower profile head area makes the tool more versatile.

If you like making sparks fly with grinders, and you were still under the impression that cordless grinders aren’t up to the task, it’s time to reevaluate your position. The Milwaukee M18 Fuel Cordless grinder is a game-changer when it comes to cordless grinder performance. With that said, if you’re dealing with continuous-on, long, ongoing usage, a corded grinder is still your best bet. But for most pro’s that need a grinder for some cut-offs or other grinder tasks that allow for some downtime/charging time throughout the day, the M18 Fuel Grinder packs remarkable power coupled with impressive run-time. As we found with the other recent Fuel reviews we’ve done recently, the power coming out of these cordless tools is pretty stupefying. Despite the tool sporting overload protection, we didn’t once see it kick in. That’s something that very few, if any, cordless grinders can boast. If you are already in the M18 lineup, or if you have budget to get into it, we highly recommend the Milwaukee M18 Fuel Grinder.

You can find the Milwaukee M18 Fuel Grinder in both paddle and slide switch kit configurations for $299, or $399 via our sponsor Ohio Power Tool.