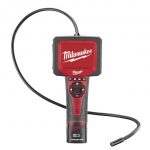 Hi. My name is Marc. And I like gadgets. A lot. I need help. Unfortunately, the only technique I use to deal with my gadget fetish is simply to play with more gadgets. Typically increased consumption isn’t really the best strategy for dealing with an addiction. However, in the case of HomeFixated, feeding my addiction results in more material for readers. It’s a win-win. Milwaukee Tools recently took part in a little co-dependence by sending HomeFixated one of their M-Spector AV M12 Video Inspection Cameras. I quickly schemed several conventional and not-so-conventional tests to put the M-Spector Av through its paces.

First on the list of tests: finding a cheerleader locker-room with a small hole in the wall to re-enact the infamous peep-hole scene from Porky’s

On to test two: Running the camera through a light fixture opening in the ceiling to inspect a distant and inaccessible slow leak in a corner of our living room ceiling. Unfortunately this test did not go as well as I had hoped. I found the M-Spector AV ill-suited for surveying larger dark areas at a distance. If you have a separate bright light to completely light the area, then the M-Spector works great at letting you take in a larger scene. However if you’re only relying on the M-Spector’s adjustable LED light, it simply cannot adequately light larger areas. If whatever you’re inspecting is well lit, or within about a foot or so of the head of the camera (and LED), we found the M-Spector AV did a good job of letting you visualize the nooks and crannies.

Tests three and four: The wall cavity inspection and the creepy shower drain inspection. For both of these tests I relied on the M-Spector AV’s built in microphone to allow me to narrate the journey (which is very handy for professionals who need to share inspection footage and narration with clients or supervisors). Check out the video below for what it’s like inside one of our walls (I was hoping to find a block of gold left by the original builder, but no dice). The second part of the video brings you far more up close and personal with our shower drain than you ever wanted to be:

Test five: The critical “can I use the M-Spector AV to cheat at poker night” test. Unfortunately this test was a total bust. Let me paint the scene for you. 10 guys moderately under the influence of alcohol gathered around a table for their monthly ritual of poker. I power-up the M-Spector AV in my lap, attempting to be subtle despite the glowing 3.5″ LCD display. Thankfully, the prevalence of iPhones at Poker night makes the glow not all that conspicuous. Sadly the test was busted as soon as one of the players next to me noticed a black snake-like camera popping up between his legs. I kinda got the reaction seen here in War of the Worlds. My assessment of the M-Spector AV for cheating at poker: not quite subtle enough.

One very interesting side-note from the poker test is the propensity for men to immediately want to inspect their mouths, ears and noses (and in several cases the tops of their heads). I have to assume Milwaukee didn’t really intend for the M-Spector to be a male personal grooming inspector, but give a man one of these and I give him a 90% chance of inspecting his ears and or nose within three minutes. One recommendation if you happen to be in a room with someone doing this: don’t look at the footage. In fact, I captured several minutes of somewhat hilarious video of several of the guys “self-inspecting”, but I couldn’t bring myself to publish it because A) I didn’t really want to humiliate my friends, at least not publicly, and, B) It was pretty disgusting. You’re going to have to trust my judgment on this, I don’t think you want to see my friends’ nasal cavities or ears. You’re welcome.

The M12 M-Spector AV is available with a 17mm digital flexible camera cable (2311-21) for general applications or a 9.5mm analog flexible camera cable (2312-21) for automotive applications. I was using the 2311-21 model. I actually found the 17mm camera cable to be a bit bulky/heavy. If you wanted to extend the camera horizontally for example, the weight of the entire cable tended to cause the cable to bend downward unless supported. Not really an issue in drains, but it was noticeable when trying to inspect in a more open area like an attic. 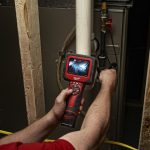 The LED features four brightness settings, which I found very handy for dialing in the right amount of illumination. One issue that was noticeable was that the LED light can cause a “bloom” of very bright light that essentially washes out that portion of the video screen. If you’re inspecting things up close and have the light set too high (or if you’re working near reflective environments), the bloom can be a bit of an annoyance. However the LED’s adjustability is very flexible and works well for helping minimize the bloom in certain settings.

The M-12 M-Spector AV definitely excelled in close quarters and didn’t do as well with longer distance (one foot or more), unless the scene was well lit. A couple stand-outs are the ability to shoot video (with audio as well), the ability to shoot still pictures, the ability to adjust the LED light, and the built-in zoom feature. One thing you may find is that orientation is tricky. Milwaukee cleverly included an option to let you easily rotate the screen image in 90 degree increments (of either live or captured images), but even with that feature, figuring out which side is up and then getting it oriented properly on the screen can really be a challenge. 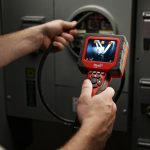 I hooked up the M-12 M-Spector AV to my Mac with the included usb cable (the M-Spector also includes a 2GB Memory Card that records 90 minutes of audio/video or 12,000 photos). iPhoto fired right up and I was able to import both the still images and video fairly effortlessly. One minor issue is that the video clips just showed as black boxes in the preview frame in iPhoto, (vs an actual frame of the video in most other videos we have on our system). I also got an error when I tried to properly un-mount the device from the computer and remove the usb cable. However, the actual transfer of data all worked fine.

The M-Spector AV has optional 3′ and 8′ extension cables , with a recommended maximum extension of 30′. The cable is waterproof. The M-Spector will also automatically shut off should you accidentally leave it on after a drain inspection. Run time is estimated by Milwaukee to be around 12 Hours. We were able to do all our testing (“personal inspections” included), without having to recharge the standard M12 battery at all. The M-Spector AV comes in a plastic carrying case and includes one charger and one M12 battery.

You can find the M-Spector AV for right around $350 from our sponsor Ohio Power Tool. They also carry the 3′ and 8′ extension cables at around $50 and $100 respectively. Just don’t plan on paying for it with your cheated poker winnings.