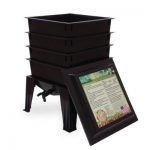 A while ago, I was all crazy for the NatureMill Indoor Composter. Make no bones about it, I’m still enthralled by this gadget, even though the company didn’t take my obvious public begging hinting to heart and send me a demo unit. Don’t they know who I am? No? Well, OK, then. So as much as I do think the NatureMill Indoor Composter is a good idea, some may point out that there are three things about this composter that might turn people off:

1. It requires power (via wall plug-in). If you’re a super greenie and conserving as much energy as possible is important to you, you’ll probably not be super wild about a machine that has to be turned on the entire time.

2. Because the composter needs to be plugged in, it limits where you can place it. In a lot of homes, the only free outlets are in the living room. As nice and apparently smell-free as the NatureMill is, you might not want to have it churning dirt next to you while you’re trying to watch TV.

3. While sleek, it’s not cheapest indoor composter available on the market.

So, the very greenest and most natural way to do indoor composting is with worms (also known as vermicomposting), and one of the best worm composters available is the Worm Factory Compost Bin.

Worms are nature’s garburators with a bonus feature: Once they’ve eaten your damp paper, vegetable peels, fruit cores, egg shells and coffee grinds, they poop out compost that you can use to grow more stuff with. Who knew so much green-thumb gold came out the back ends of so many creatures?

What the Worm Factory Compost Bin does is allows you to create an environment where worms will thrive off of these everyday scraps while keeping things contained and clean for us finicky humans. The Worm Factory is actually an entire kit – it includes the ‘house’ with its many layers, a brick of coir and materials to get things started, some accessories like a thermometer and a mini rake for combing through the compost (although hands will also do just fine) and instructions. To give you a better idea, here’s the instructional video (just me, or does it sound like Postal Service, done generically, in the background?):

This particular unit stands 18 x 18 x 15 inches and weighs about 11 lbs (before you put anything in it). A nice bonus feature is that it’s an adjustable compost bin, meaning that you can buy extra levels should your family grow. Larger versions are also available on the market if you already know you’re going to go through a lot of vegetable and fruit waste.

I’ve read review after review, and owners of the Worm Factory Compost Bin have made several assurances that your worms won’t escape on you, which is a big deal to us squirmy types. They stay in there, quite happy with the cushy set-up. A quick tip: Worms prefer the darkness, so you can improve your chances of the wiggly dudes digging in and keeping in your Worm Factory Compost Bin by storing the unit in an area that regularly gets light (they dare not venture out, then).

You can get the Worm Factory 360 WF360B Worm Composter, Black

at Amazon for $109.95. This particular kit does not include the worms themselves – so you’ll need to get some Red Wigglers