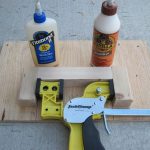 I freakin’ love Discovery’s Mythbusters.  That show is pretty awesome.  They get to build stuff, blow up stuff, make robots, and have a super huge shop with pretty much every tool imaginable.  They have even gotten drunk on some episodes.  Pretty sweet setup.  If you could get past the fact that Jaime seems sometimes…er…gruff–I think it would be a pretty cool gig.  It kind of got me thinking…I need to start a bit of DIY busting.  You know–test all the myths of home building so you don’t have to.  (Plus, they lack a decent carpenter on the show.  Some of the buildings they construct–just to blow up could use a bit of pro.  HINT).

So–my “myth” started out of just a straight-up lack of ideas for anything decent to tell you–and secondly because I am one of those “if it ain’t broke don’t fix it” kind of fellows.  Mostly–because even if it is sorta broke–I still don’t want to fix it.  This harkens back to my Big Three B’s of summer.  I’d much rather drink adult beverages and catch a ball game on the official transportation of HF:  The Lawnmoweravision.  I’m pretty well stuck in what I know works, and so I tend to ride it out despite overwhelming evidence to the contrary.  It’s the Irish/Scandinavian heritage I tell you.  We’re never wrong.  About anything.

Also–I had to check out the power on the recently reviewed Jack Clamps and try and break them.  It’s my job.  Thus–I give you Fixated Myth #1:

Titebond II vs. Gorilla Glue.  Mystical Wood Ninja Wayne introduced me to Titebond–and I’ve used it exclusively.  MYN Wayne claims that the actual wood will break before the Titebond joint will–you don’t argue with The Wayne.  Some of you will recall my Harbor Freight Tools article/review and remember that I mentioned picking up some bottles of Gorilla Glue on the cheap.  So, in full disclosure I am biased toward the Titebond.  As I write–the experiment is not completed–so I do not know how it will turn out.  Here is the set up:

Using the same piece of lumber, I cut 7 3/4” lengths, and small “posts” for each end.  The reason I cut the post this way, is that is the smallest the Jack Clamp will get while set in the opposite directions.  I intend to use the Jack Clamp to spread the two different test joints–and see which one gives way first.  Or breaks the clamp.  Or explodes.

Unfortnately…I didn’t have Kari or even Grant to help with my build–so I just had to wing it.  My editor informed me the HomeFixated budget doesn’t currently have allocation for minions. Sigh. Anyway, I tried to remain true to the “science” of the experiment.  I first used the Titebond on one joint, and then the Gorilla on the next joint.  I alternated the glues so one wouldn’t have more time to set up.  I then clamped the pieces together, and stored them together for the curing process of 24 hours.  I even used two seperate glue brushes to avoid any cross contamination.  I tell you–there is no length I will not go to to give you: the Fixaters, a true test of one wood glue versus the other.  This could mean the different between a piece of trim that stays on for 70 versus 71 years.  Important things to know.

After sitting in my garage–clamped together per manufacturer’s instructions for the allotted 24 hour period…I conducted the strength tests on my pieces.  The exciting results?

Gorilla Glue broke at a distance of: 8 3/8 inches.  Interestingly enough–the glue broke at the joint, and made a clean break.

Titebond II broke at a distance of: 8 1/4 inches.  The Titebond definitely ripped pieces of the wood out–but broke at a not-so-astounding 1/8 of an inch different than the Gorilla Glue.

The Jack Clamp performed as advertised, and if it wasn’t an inanimate object–would have yawned at the “strain” I put it under with my highly scientific “test”.

The real conclusion that I draw from this entire experiment is that either glue will perform admirably if asked to do it’s job, and not be put under the type of load I put on it.  Also–I have entirely too much scrap wood, glue, clamps, and time on my hands…

I also doubt that Discovery is frothing at the mouth to get me in for a screen test. But just in case they are, send us an email. Your hollywood money goes a long way here in Montana. You can find both Titebond and Gorilla Glue at our sponsor Rockler.