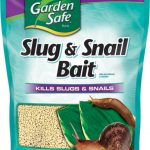 We talked about organic ways to kill snails in our article about using beer as snail bait. The problem with that technique is not that it’s ineffective, it’s that you have to sacrifice beer in the name of snail killing. That’s just not a sacrifice I’m willing to make. Several weeks ago, a massive snail assault began on our property. When I went outside in the evening or early morning, it was like Night of The Living Dead …. snails disconcertingly converging on us from every direction. I briefly entertained leaving them be, especially since our 3 year old daughter loved pointing them out to me every morning. She’d grab one and say “Look daddy, a snail!” Now that I’m writing this, it’s making me realize I’ve been a horrible father. . . . I have massacred my daughter’s favorite morning entertainment. Luckily she can’t read, so let’s just keep this review of Garden Safe Organic Slug and Snail Bait between you and me, shall we?

When I say the snails mounted an assault, I’m not kidding. They were everywhere. Aside from devouring several of our plants, they decided they even liked our house itself. We were finding them on our windows, walls, and doors. Thankfully none of them made it inside, but they had managed to take over the entire property nonetheless. Something had to be done. Something that didn’t cost me any beer. Something that wasn’t loaded with toxins (other than the kind that kill the snails). And that’s where Garden Safe made their appearance.

Garden Safe has an entire product line of organic, more eco-friendly, less toxic garden products that include herbicides, insecticides, and flower care solutions. Garden Safe sent us two of their two pound bags of their Slug and Snail Bait. I didn’t waste any time distributing the little pellets throughout our yard and even on our lawn (which was also loaded with snails, apparently they like lounging). According to Garden Safe, their Slug and Snail bait can be used around pets and wildlife, and can even be used in vegetable gardens. It’s also Organic Materials Review Institute listed. I even read their MSDS, which primarily suggests wearing gloves during application, and not sticking the pellets in your eye. Sounds manageable. From what I can tell it seems like a relatively safe product, especially for something that kills stuff. Which leads us to the actual gloves-on review. After applying the pellets roughly to the spec’s listed on the bag, I waited. Garden Safe suggests that snails should start dying within 3-6 business days. Ok, it’s just 3-6 days. It all sounds so brutally cold and pre-meditated, doesn’t it? Anyway, after 5 days I conducted a reconnaissance mission in the yard with my daughter. It was like the snail killing fields. It seems Garden Safe Slug and Snail bait dealt a deadly blow to our snail population. We looked for survivors, but quickly realized this was a recovery mission, there would be no prisoners. Only shells. Shells of the fallen. Despite loving snails days earlier, my daughter adapted quickly to the new mission (as you can see from the photos). 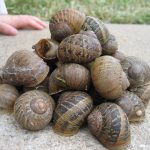 If you’re serious about killing snails, but not interested in dispersing highly toxic poisons in your yard, I’d recommend you consider Garden Safe Slug And Snail Bait

. Especially since it won’t cost you any beer! Available for about $10 per two pound bag.