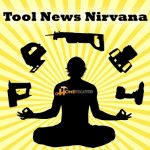 This week, I was happy to be invited back to Milwaukee’s New Product Symposium at their HQ in Bangalore, India. Actually, their HQ is where you might expect, in Milwaukee, Wisconsin. I Just returned from the media event and my head is still spinning with red tools. This was my second year visiting Milwaukee’s HQ, and doing so is always a great time. Milwaukee is a fantastic host (case in point – they wheeled out heated, moist towelettes at the end of the day. . . seriously!) No massages were offered after a long day, although I’m pretty sure they would have set it up in a heartbeat if we asked. Aside from learning about the latest happenings at Milwaukee Tool, the event is also a great opportunity to meet and catch-up with fellow media personalities. It also provides a unique opportunity to interact with the Milwaukee team. I enjoyed talking with product managers, which also afforded me the opportunity to make my usual hard-sell on a black version of the M12 heated jacket. No luck on that front, but at least one media person called me a city-slicker when I mentioned it.

Milwaukee CEO Steven Richman always conveys an infectious enthusiasm that seems genuinely shared with the rest of the team. I also find endless entertainment in the thoroughness of Milwaukee’s branding, which this year included Milwaukee branded soap dispensers in the men’s room and Milwaukee drink coasters and signature drinks at dinner. I’m also sticking by my previously reported rumor (which I started), that Steven Richman mandates red underwear for all employees. The first Milwaukee employee to send me (new) red Milwaukee branded boxers gets a free HomeFixated hat. Extra points if it has some manly Milwaukee “Thunderbolt”-type product name or slogan.

So, what about the new tools? As is tradition with media events like this, we learned about new products for immediate or soon-to-be public consumption, but we were also sworn to secrecy about select new products. Last year Milwaukee broke some news on great new hand tools, including my favorite utility knife, the Milwaukee Fastback. While I can’t talk details, I can say that expecting even more innovative releases in hand tools this year is a totally reasonable expectation. It’s clear that the hand tool category is not an afterthought. The non-disclosure terms I signed include staining everything I own red and getting a chest-sized Milwaukee tattoo if I breach any time-sensitive info. . . something I’m not quite ready to do at this point. However I can say the veil of secrecy will be lifted in the not-too distant future, and we’ll have some exciting products to shed more light on at that point.

As far as products we can talk about, there were some definite standouts. Two favorites included a new M12 jigsaw, and an m12 Thermal Imager. The M12 jigsaw was a real surprise to me, mainly because I hadn’t really imagined a 12v cordless jigsaw. Dave Campbell from Wood Magazine, and Ethan Hagan of OneProjectCloser and I all took our shots at seriously curvy cuts with a scroll blade attached. I was amazed at how freeing a relatively small cordless form factor could be. No more awkward cord-management maneuvers that inevitably screw up your cut. We showed off more curves than the latest Angelina Jolie movie, all with zero binding, bogging down or power issues. I also really liked the Hyrbid Grip configuration (a blend of top handle and barrel designs that seems to combine the best of both). We could easily see this 12v jig-saw becoming the primary go-to tool when it comes to most typical jigsaw needs. Estimated pricing should be somewhere roughly in the mid $100’s, a bargain relative to some of the other larger options out there. 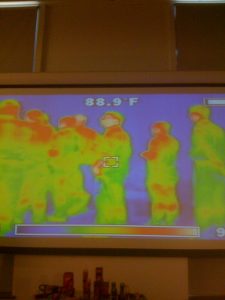 Milwaukee’s new M12 Thermal Imager was also sweet, although at a $2500 price point it’s clearly not targeted at the DIY market. For HVAC, energy audits, building maintenance, insulation checks and about a million other applications, a thermal imager is an immensely powerful tool. One really slick feature is that the Milwaukee model simultaneously shoots both the thermal image along with a digital photo, making it much easier to later piece together what you’re looking at. It also includes an area light to help navigate dark areas. Milwaukee also offers up some software for contractors to provide detailed images and reports that can be easily and professionally marked-up with notes, temperature details, etc. Aside from being intensely useful to many trades, these are just way too much fun to play with.

We also liked Milwaukee’s new M12 1/4″ and 3/8″ cordless ratchets. These are tools commonly used in applications where an air hose is seriously inconvenient. Milwaukee thoughtfully recessed the direction switch helping avoid those annoying accidental direction changes. Like a standard ratchet, you can also hand-muscle these when you want a little extra power. We predict these tools will be a big hit with automotive crowd. Great stuff! 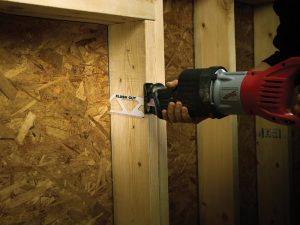 Milwaukee also provided an impressive demo of their new-ish Flush Cut and Rough-In Blades. We’ve mentioned the blades before, but this was the first time we saw them in action. The Flush Cut blade cleverly includes a couple floor guards integrated into the cutting side of the blade. The result is the actual teeth don’t dig into your floor after you cut through a bottom plate. I also hadn’t realized how useful the Flush Cut is for door or window cutout applications. A demo was done simulating a window cutout, with one side cut with a standard blade and the other with the Flush Cut. Thanks to the high profile design, the Flush Cut made a beautiful, straight cut while the conventional blade did some serious wandering. The Rough-In blade also showed impressive plunge and tight turning radius capabilities.

Although we covered Milwaukee ShockWave Bits before, Milwaukee presented a “shattering” demo on bit longevity in the increasingly popular impact tools. They demo’d a competing bit shattering after just two feeds of self-tapping screws. The same task presented no problem for Milwaukee Shockwave bits. In fact, some poor Milwaukee minion tested about 9 different bits to failure (we’re talking hundreds or even thousands of screws driven until bit failure. Milwaukee powered on well above 1000 driven), while some competitors consistently failed at one screw driven (ouch)! Our takeaway is that if you’re driving screws, small bolts, etc. with an impact drill, Milwaukee Shockwave bits should be on your short list for bit options. The kits also include slotted screw bits, one of the only shortcomings we found in early kits.

Keep your eyes on HomeFixated and we promise to have some more exciting new product details available soon. We’ll also being providing select hands-on reviews too. Stay tuned! 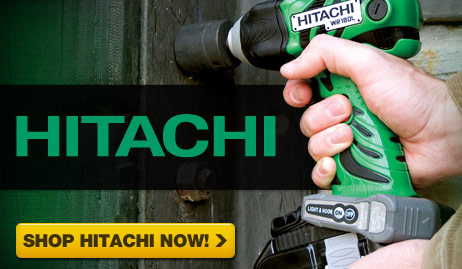 Paslode 25 Years of Cordless Promotion
Paslode is celebrating 25 years of cordless with a new Facebook promotion. Visit the Paslode Facebook page and click on the “25y in cordless” listing – found in the left hand column. There a Celebration Page will ask when you first started using a Paslode cordless nailer. Just click on the year, and it satisfyingly pounds in a nail. Everyone who tells Paslode when will get a T-shirt or a Hat and a chance to win a Paslode nailer. Give it a shot – if you’re already signed into Facebook, go to this Facebook page, or, you can also access the contest thru www.Paslode.com.

SkatePlate H20 – The One Time Circular Saws and Water Go Well Together?
About a year ago we reviewed the innovative SkatePlate. Woodman Tools is now just about ready to roll out their new water jet-equipped-version. Slated to start shipping in August of 2011 with a retail price of $189.95, the SkatePlateH20 is a standard SkatePlate equipped with a water jet system that promises to greatly reduce if not eliminates dust making. Woodman is recommending it for tile, granite, masonry, concrete, or any similar task. 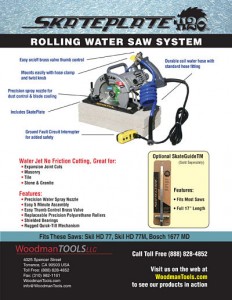 A button that attaches just above the saw trigger activates the flow of water when needed and can be easily stopped and started. The stream of water shoots across the blade to not only keep things cool, lubricated, and dustless; it also helps prevent slurry from building up in the saw housing making for an easier clean up. The SkatePlate will not interfere with the depth of your cut allowing for cuts up to 2-1/4″ in depth for expansion joint cuts and just like the dry version, you will always be on a smooth, straight track that will not be hindered by inconsistencies in the surface you are working on. A commercial grade, outdoor rated GFI interrupter is also included since water & electricity sometimes don’t get along.


DuoFast is leading company’s entry into pneumatic button cap Fastening. New in-line design promises best-in-class maneuverability and cap capacity! While a pneumatic concept makes sense for many trades working on the exterior of a house, the need for tools to hold and feed both fasteners and caps presented challenges. According to DuoFast:

Early designs could be finicky to operate, aggravating to load andcumbersome on the job. With its first entry into pneumatic cap fastening, Duo-Fast® Construction has taken aim at pro users’ most common complaints. The DF150-CS Cap Stapler is far
faster than hand stapling, more maneuverable and reliable than competitor cap fastening systems and designed to get the job
done right – every time. Firing staples and plastic button caps in a single operation, Duo-Fast’s DF150-CS is ideal for
installing roofing felt, plastic sheathing and house wrap materials. An in-line magazine keeps the tool compact and balanced for consistent, precise drives every time. Along with great balance, the tool is one of the lightest in its class, which reduces user fatigue throughout the day.

The new design promises a significant boost to productivity on the job, partly thanks to Duo-Fast’s exclusive 240-cap spool system.
The system enables Duo-Fast to offer the best cap capacity in the category, a perfect compliment to the tool’s 110-staple capacity. When it is time to add fasteners, an open-loading design makes reloading quick and easy and eliminates the hassles that previously accompanied the process.

Festool Giveaways
Festool’s July giveaway is a drool-worthy Domino Joiner and Assortment Systainer (worth over a grand)! We also have it on good authority that the August giveaway will feature a Rotex RO 90 DX and a CT Dust Extractor. Find all the details on the official Festool Sweepstakes Page. 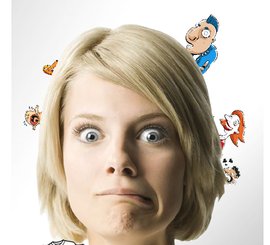 Krazy Glue has a contest rolling on their Facebook page. You just enter your Krazy Life story for a chance to win one of several fun weekly prizes. Visit the My Krazy Life tab on Facebook for prize and contest details. You can also check out the mildly creepy animation this photo was taken from.