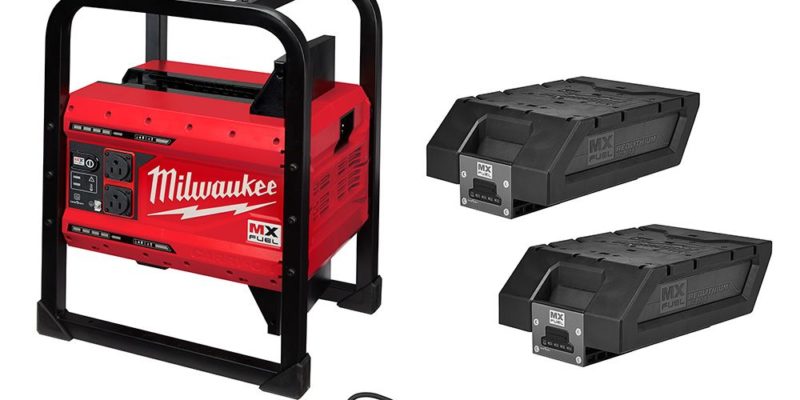 We first heard of Milwaukee’s MX Fuel system during Q4 of 2019. Here on Home Fixated, we had some MX Fuel coverage of it, too. This announcement was (and is) nothing short of groundbreaking. Yes, pun definitely intended there. The initial launch line-up consisted of a 14” cut-off saw, a concrete breaker, a handheld core drill, a 27,000-lumen tower light, a 3600W/1800W power supply, and a sewer drum machine. Of those, only the 3600W/1800W power supply hasn’t been released yet – until now. Tool-ladies and tool-gentlemen, today we’re going to learn about the upcoming Milwaukee Power Supply.

A New Milwaukee Power Supply for a New Way of Working

The MX FUEL™ CARRY-ON™ 3600W/1800W Power Supply is set to be released this month (February, 2021). Milwaukee claims that it is intended to replace gas-powered generators on the job site. Instead of an internal-combustion engine, this generator uses MX FUEL™ REDLITHIUM™ batteries, plus a lot of trademarks, apparently, to deliver temporary power where you need it.

The 3600W/1800W labeling is because of the power supply’s ability to use either one or two batteries. Doing a few small jobs around the site and want to move quickly? Use one battery. Doing heavier-duty work that requires more power and runtime? Use two batteries. Currently, Milwaukee offers two battery choices for its MX FUEL lineup – a 3aH and a 6aH. The charge time for the 3aH is only 45 minutes.

Run Your Jobsite with the Milwaukee Power Supply

It’s always tough to say exactly how long a battery will last in a given application. It’s even tougher when the battery is used in a power supply like the CARRY-ON™, since it can be used to power so many different things. For example, something like a laptop or phone charger could definitely be powered all day. Powering heavier-draw tools like saws and drills would take more energy, obviously. According to Milwaukee, the CARRY-ON™ will power up to 1210 cuts with a circular saw or 270 cuts with a 12” miter saw. It’ll also supply enough juice to make 55 ¾” threads with a stationary pipe threader. The above figures assume the use of 2x 6aH batteries.

Other features of this new Milwaukee Power Supply

The CARRY-ON™ is available for pre-order now, and should begin shipping right around the same time as this story publishes.