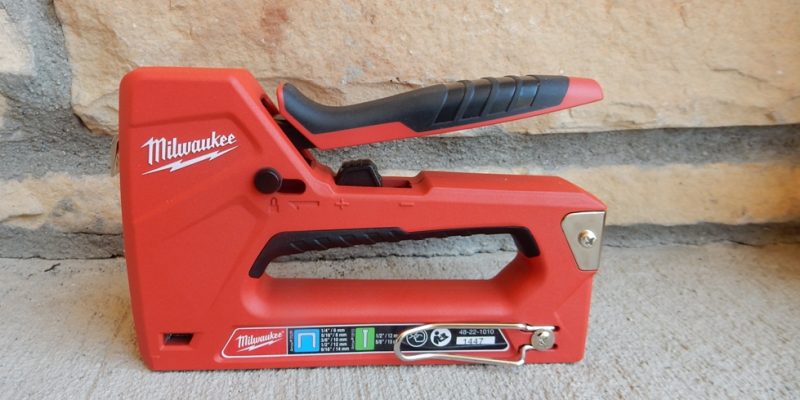 Of all the tools ever made, a staple gun is one of my favorites. I use staple guns with abandon. I imagine I’m Dirty Harry facing off some bad guys, and use my gun to better the universe. I’ve had enormous fun with the Milwaukee Staple and Nail Gun that shoots staples from 9/16″ down to 1/4″ and 18 gauge brads in 5/8″ or 1/2″ sizes. I stapled some upholstery that was hanging down from under my sofa. I replaced a small piece of baseboard, and I was delighted to not have to pull out a compressor for the task. I used it to repair and prepare my garden for the upcoming season. I was impressed with the result of every job – inside and out – that I threw this gun’s way.

Easy on the Eyes, and Fun to Hold

The Milwaukee Staple and Nail Gun has a nice size that’s a cinch to hold. It’s relatively lightweight in spite of its metal construction. It’s easy to carry around the house or job site hands free with its handy belt clip. Its handle locked position helps keep the tool compact and more portable compared to other comparable models.

While this gun is light in size, it’s a heavyweight in terms of power. Almost double the driving power of other guns, this one comes equipped with dual-mode power switch that allows you more or less power depending on the task at hand. For my upholstery job, I didn’t need a lot of power. On the other hand, I wanted the nail to set into my trim piece, so I upped the power with the flip of a switch to drive deeper.

Psychoanalysis of Tool Use

The power of this gun requires some decent hand strength, which some have more of than others. Sigmund Freud stated that we girls are born jealous of guys. He was a little off with the anatomy that we really covet though, because it’s a guys HANDS that make us green with envy. The guys I asked to give this gun a whirl were able to shoot this stapler with one hand. I, on the other hand, needed both hands to squeeze the handle hard enough to shoot, and that made a couple of jobs a little tricky for me. I’m a girl who confesses to having hand envy over this struggle, but I didn’t let it prevent me from finishing the jobs or from really liking this tool.

This staple and nail gun is designed with a built in staple remover which prevents you from having to carry around an additional tool. I’ve often found myself prying out a staple or two that didn’t set right where I wanted it to, so I appreciate this convenient feature. I actually found I didn’t need to use the staple remover feature as often with this gun as I would have with other guns. The staple remover is a great feature, but the power of this gun improved my driving control so I had fewer mistakes to use the remover for.

And speaking of mistakes, staple gun jams are a real time-consuming bummer. Which is the number one reason why I’m a big fan of this gun. I’ve had no jams, and loading this baby’s magazine is a snap. Whether you’re loading it with nails or staples, you simply slide the carriage out, load them in, and slide the carriage back in until it snaps. You’re ready to shoot in no time flat.

The next time you’re in the market for a staple gun, aim for the Milwaukee Staple and Nail Gun. It totally made my day. Go ahead, it’ll make your day, too (for about $29)!