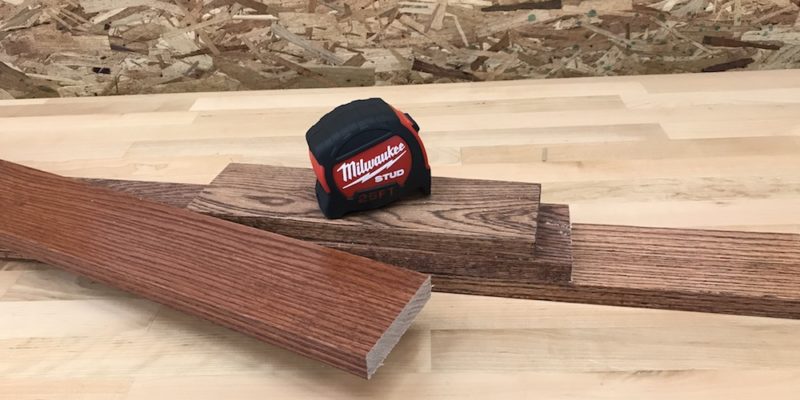 Several months ago, deep in the darkest depths of the Milwaukee Tool marketing offices, the dictate came down: “Come up with a kick-ass name for our newest tape measure. And we want it to be named after a construction component, and to be kinda macho.” The creative juices began flowing: Milwaukee Truss, Milwaukee Joist, Milwaukee Vent Stack…and many other (somewhat) worthy suggestions were tossed around, but none of the ideas seemed to quite measure up. Someone chimed in with “My brother the mason is quite a stud. I’ll see what he suggests. Hey, wait a minute…” And thus was born the Milwaukee STUD Tape Measure. Join us as we put it through its studly paces.

A tape is a tape is a tape, you may be thinking. They all have numbers and markings on them, and as long as they’re accurate, what’s to get excited about? Aside from the chance to own a tape that every guy on the site will claim is named after him, that is…The tool designers at Milwaukee know that tape measures take a lot of abuse in the real world. They get dropped, twisted, stepped on, retracted too aggressively, and dragged over concrete and other unfriendly surfaces. To lessen the effects of some of this abuse, Milwaukee came up with a brand-new blade technology called EXO360™.

Designed primarily to protect the blade from tearing, EXO360 is used to completely coat the blade on the Milwaukee STUD tape measure. This new technology also prevents wear to the blade’s surface; Milwaukee claims the protective nylon coating increases abrasion resistance on the tape by 10X over previous tapes. This means in addition to preventing the blade from ripping, it also keeps the markings from wearing off.

To give the blade a safe, cozy place to live, Milwaukee designed a fully reinforced frame, with an impact-resistant overmold. Milwaukee claims the Milwaukee STUD tape measure can survive a drop of up to 80’ onto packed soil, and still be rarin’ to get back to laying out studs. Here’s the feature and spec list, followed by a promo video from Milwaukee:

Like the last couple of tape measures we’ve looked at, the Milwaukee STUD tape measure is fairly large. This is a byproduct of making a tape capable of withstanding a drop of 40 or 60 or 80 feet; it needs a pretty robust case. And the case on the Milwaukee STUD tape measure is definitely that. It’s comfortable to hold, though, and the rubber overmold on the top makes it both comfortable and slip-resistant. The overmold extends underneath and covers the feet as well, which helps keep the tape in position when it’s standing on its own.

Speaking of which, whoever designed the Milwaukee STUD tape measure obviously grasps the concept that tapes with a curved bottom in front don’t stand up well. The slot that the tape retracts into is curved, following the shape of the blade, but the front area of the base is FLAT. It’s the little things…

Another little thing is the finger stop opening built into the underside of the case. This allows the user, whether stud or studette, to control the speed of tape retraction without getting the inevitable finger slam at the end. The blade lock is easy to set and release, and for you lanyard users, there’s a recess built in and waiting.

The numbers on the Milwaukee STUD tape measure are huge, obviously designed with visually-challenged old farts like me in mind. I also like the wire form belt clip; it’s easy to get on and off my belt, and when I hook it onto my pants pocket, seems less likely to end badly…

All tape manufacturers want to claim as much standout as possible, and Milwaukee is no exception. They claim up to ten feet of standout for the Milwaukee STUD tape measure. I was never able to get the full 10’ extension before the tape buckled, but I could routinely get around 116” if I took my time, and that’s close enough that I think we can safely round up.

On The Job With The Milwaukee STUD Tape Measure

Over a period of a couple of weeks, I used the Milwaukee STUD tape measure on several projects. Among other things, I used it to take measurements for drywall installation, to get preliminary measurements for a deck replacement, and to estimate materials for facing on a masonry knee wall. I even used it to help locate its namesakes lurking behind the wall, when I was getting ready to install some baseboards. As you would expect from a modern tape measure, it was dead-on accurate, for both inside and outside measurements.

None of my current projects are anywhere close to 80’ tall (and I’m OK with that), so I didn’t have a way to verify Milwaukee’s claim that the Milwaukee STUD tape measure could survive an 80’ drop. I did, however, take the tape up to the second floor, and throw it up in the air and onto the lawn. Twice. Other than getting a little dirty, it seemed unfazed. As you’d expect from a STUD.

The anti-abrasion coating on the Milwaukee STUD tape measure is one of its main features, and I wanted to give it a little workout as well. I took it out to our 20’ concrete block knee wall, fully extended the tape along the top, and let it retract quickly along the surface about a dozen times. I then held the hook, and grabbed the blade about 30” up, and “sawed” the bottom of the tape back and forth over the concrete blocks. It left some rub marks, but didn’t scratch through the coating at all.

Not The Only STUD In Town

When we opened the package with the Milwaukee STUD tape measure, we found a card asking us to share a STUD. No, Milwaukee doesn’t have a kinky side – at least not that we’re aware of. They had actually sent two STUDS – along with that card asking that we pass the second one along to someone who was training to enter the trades. We think this is an awesome idea; as we discussed in an earlier skills gap post, there is a serious shortage of skilled tradespeople looming on the horizon. I’m passing the bonus tape along to the local A.W. Beattie Tech Center, making some lucky recipient an instant stud. Hopefully it will help motivate him or her to STUDy…

Are You STUD Material?

I appreciate tools that are well-designed, well-made, and durable. The Milwaukee STUD tape measure qualifies in all regards. The case is rugged and beefy, the hook is very securely attached with three rivets, and the EXO360 blade coating seems to work very well. The fact that it coats and protects the edges of the blade is a definite plus; having the numbers wear off is annoying, but getting your finger sliced open by a tape with a nick or tear in the edge is painful. And likely to result in the demise of said tape, when it gets hurled with great force against an immovable object.

The only quibble I have with the Milwaukee STUD tape measure is very minor. The tip of the hook extends below the bottom of the case by only about 1/8”, which can make it tough to hook it over the edge of whatever you’re trying to measure. This is easily rectified by extending the tape a few inches, which provides a much larger hooking surface.

The Milwaukee STUD tape measure we received is a 25-footer. It’s also available in a 16-foot version. We have been assured that it is in no way less studly than the longer model. Both tapes are covered by a rough, tough limited lifetime warranty, and a 90-day no hassle return policy gives you plenty of time to make sure the STUD lifestyle is right for you.

Buy the 25’ Milwaukee STUD tape measure from the Home Depot:

Buy the 16’ Milwaukee STUD tape measure from the Home Depot: