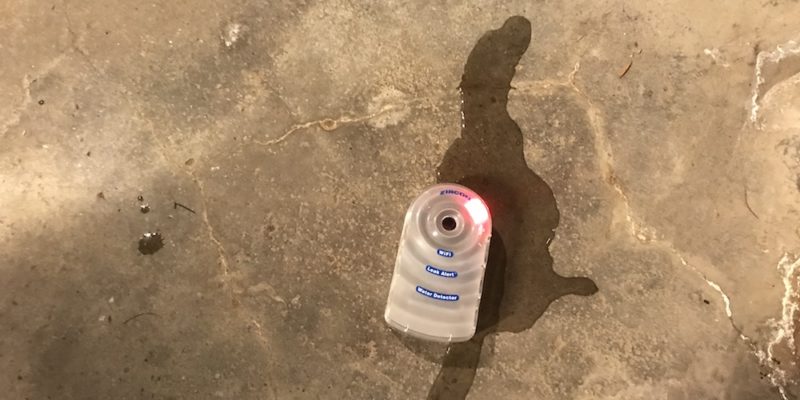 A few years back, apparently we were bored, or possibly smoking crack, and we bought an old farmhouse that needed lots of work. We spend as much time as we can there, as we re-do pretty much everything in the place. It’s about 90 minutes from our home, so while we’re there, frequently no one is home to keep an eye on things, and vice-versa when we’re at home. Usually all is well, but after one trip to the farm, we came home to find our water heater had sprung a leak, and we had a very wet floor. This is just what the engineers at Zircon had in mind when they came up with the Zircon Leak Alert WiFi; they floated one our way to evaluate.

Fortunately for us, our water heater was in the basement, which has a floor drain, and the rupture was fairly small. I shut off the water, got the floor dried up, installed a new water heater, and all was well. Leaky appliances and fixtures aren’t always so thoughtful, though; many are installed in finished areas, and even a relatively minor leak can do thousands of dollars worth of damage pretty quickly. Getting a fast heads-up can mean the difference between a minor cleanup and a major renovation.

One way to get that heads-up is with a moisture-sensing device, such as the Zircon Leak Alert WiFi. When its contacts sense water, the unit emits a loud 105dB tone, similar to that of a smoke detector.

If you’ve gone through the WiFi setup process, it will also send an email alert to up to five email addresses. For a potentially much faster alert, there’s also an easy workaround to have it send a text to most mobile devices; we’ll get to that shortly. Meanwhile, here’s a list of features found on the Zircon Leak Alert WiFi, followed by a short promo video from Zircon:

• WiFi connectivity – No hub required
• Loud alarm (105 dB) sounds for up to 8 hours
• Email, visual, and audio alerts
• In the event of a flood, unit will float and continue to sound alarm until battery is depleted
• Fully automatic operation — no wiring required
• Low battery indicator for optimum safety and performance
• Ability to check for, and update, software revisions

Setting Up The Zircon Leak Alert WiFi – Battery Included, But…

The Zircon Leak Alert WiFi comes fully assembled, with a CR123A 3V battery pre-installed. Theoretically, you just pull out the little insulating strip so the contacts connect, and you’re good to go. The case is easy to open, and I pulled the insulating tab out.

Per the instructions, I got my finger wet, and placed it on the sensor contacts on the bottom edge of the unit. The red LED flashed, and an ear-splitting squeal came from the detector – all good.

Or so I thought. The Zircon Leak Alert WiFi will work without further tinkering, but will only give a local warning: The light and tone. To get email alerts, it needs to be configured. I followed the instructions and tried repeatedly for 10-15 minutes, but couldn’t get the unit to activate itself as a wireless access point. It was also behaving strangely with various combinations of flashing on the LEDs when I pressed the reset/wake button.

At this point I suspected I might have a bad battery. I pulled one out of a small flashlight, stuck it in the Zircon Leak Alert WiFi, and all was well. Looking through the reviews later, I saw this was a common complaint from buyers. The instructions and comments from Zircon say that during setup, the battery will sometimes send a false “Low battery” message. That’s not what happened with mine, though; it wouldn’t even start the setup process. Note to Zircon: You might want to switch battery brands, or make sure your supplier starts giving you fresher ones. Not a good way to promote happy customers.

Once the new battery was in, setting up the WiFi was pretty fast and straightforward. It can be done with a smart phone, iPad or computer. I did it with my laptop, and it found the unit’s WiFi signal and made the connection quickly. Note: Make sure you’re prepared to get to it and get through it with no breaks. The setup times out after three minutes, for some reason, and you’ll have to reconnect to the IP address provided to finish the process. Thankfully, it saved all the info I had already put in; I just wanted to add another contact email, so the Zircon Leak Alert WiFi would send the alerts to my mobile phone as text messages.

During the setup process, you can assign each Zircon Leak Alert WiFi unit a unique name, if you have more than one. This lets you know where to run to, after grabbing the mop: Water heater, washing machine, hot tub, Kegerator (Nooooo!), toilet (send someone else), etc.

Having the alerts sent to your cell phone is probably faster for most users than getting the news via email. To do that on a Verizon phone, just set up the contact info as 1234567890@vtext.com, where the nine digits represent your phone number. For AT&T, the format is 123456789@txt.att.net. For Sprint, it’s 123456789@messaging.sprintpcs.com. T-Mobile users use 123456789@tmomail.net. If you have another mobile provider, do a search for “how to send email as text to (your provider) phone.”

Once I had the WiFi set up for the Zircon Leak Alert WiFi, I tested it several times, using a wet finger to short it out. To give it a more real-world test, I set it on the floor and poured a small amount of water next to it. In every case, the loud alarm and flashing start immediately, and within 30 seconds I had notifications via both email and text. Here’s the friendly Zircon lady, to walk you through the setup process:

Can The Zircon Leak Alert WiFi Keep You High And Dry?

Assuming you live in a house with running water, at some point you’re likely to have a leak. Even without running water, it can come in through your basement walls or elsewhere. The sooner you discover said water and deal with it, the less likely it will be to bankrupt you. At around forty bucks, the Zircon Leak Alert WiFi is WAY cheaper than any repairs you’re likely to need. In addition to obvious spots like the water heater and washing machine, Zircon recommends placing one near aquariums, sump pumps, dishwashers, under sinks, close to the fridge, and somewhere near your hot tub.

In our case, when one house or the other is empty much of the time, having a way to get an alert when there’s a problem will help bring a little peace of mind. That way we can contact a friend or neighbor to check out the problem. If it’s a really GOOD friend, maybe they’ll even clean it up for us!

There are just a couple of things to bear in mind if you consider the Zircon Leak Alert WiFi Smart Water Detector. The first, as I mentioned, is that they seem to have an issue with occasionally sending out units with worthless batteries. Since the CR123A is not a common battery, most people don’t have spares lying around. If you get the detector, grab a freshy fresh one while you’re at it. If the included battery is good, you’re ready with a spare when it quits.

The other issue is that for you to be able to get email alerts via WiFi, obviously the Zircon Leak Alert WiFi has to be able to connect to your home’s WiFi. When I did my initial testing in the basement, the unit quickly sent alerts. When I later moved it to a different area of the basement, the local alarm went off, but apparently the WiFi signal wasn’t strong enough to connect, because I didn’t get any email or text alerts. Make sure you test each unit you install, to make sure you have the protection you think you have. It would probably put a damper on your day to go home after a week away, and find your Zircon Leak Alert WiFi floating around the laundry room.