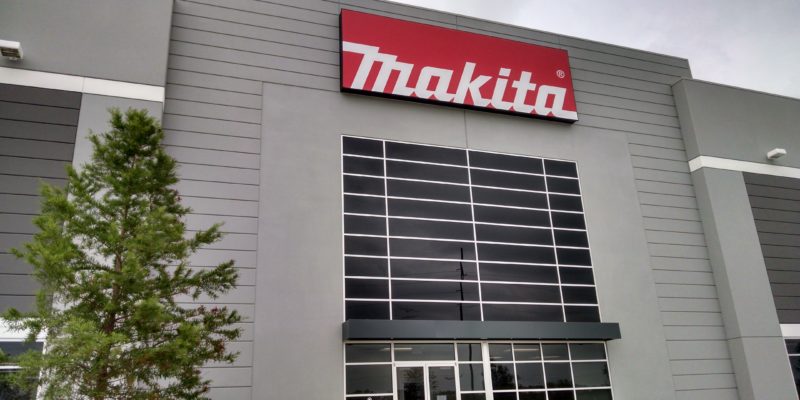 Makita dished out a lot of new tools a few months back at the 2017 World of Concrete Show, but they just took another batch out of their magic tool oven and couldn’t wait until the next big trade show to serve them up. So Makita coordinated a combination media and dealer event at the ribbon cutting ceremony of their brand new Dallas-area distribution center with the goal of showing off the tools along with the facility responsible for sending them out all over the Western US.

Here’s a quick video recap of the event, along with some sneak peaks at some of the tools announced there:

I’ve been to a lot of tool warehouses and factories over the years but never to one so new. I must say that touring a huge warehouse presented so clean and neat with no chipped paint, patched concrete, or industrial size dust bunnies under the pallet racks is a real treat for the tool industry enthusiast.

Actually situated in the nearby environs of Wilmer, TX, the new Dallas distribution center is is over 227,000 square feet all under one roof. With 42 bay doors, parking for an additional 57 semi-trailers, and floor space for 16,500 pallets, this facility is ready to move some product. And if they need more space, the 32-foot ceiling height can accommodate higher racks which will allow Makita to grow up before they have to grow out. The building sits on 14 acres, but Makita also snatched up an adjoining 10 acre plot to allow for future expansion to the site.

One surprising fact about this operation is that it all runs with a lean crew of 33 people–that’s 6,886 square feet per worker if anyone’s counting. Texas-sized wide open spaces aside, everyone’s favorite room has to be the training center lab. Tools, accessories, and materials paired up on workbenches are spread throughout the workshop to give salespeople, dealers, and the occasional tool journalist a chance to spend some quality hands-on tool time. There is also a spacious showroom packed floor to ceiling with display racks of shiny new tools. The other real surprise being that this commodious collection represents only about 30 percent of the tool models Makita sells in the USA. 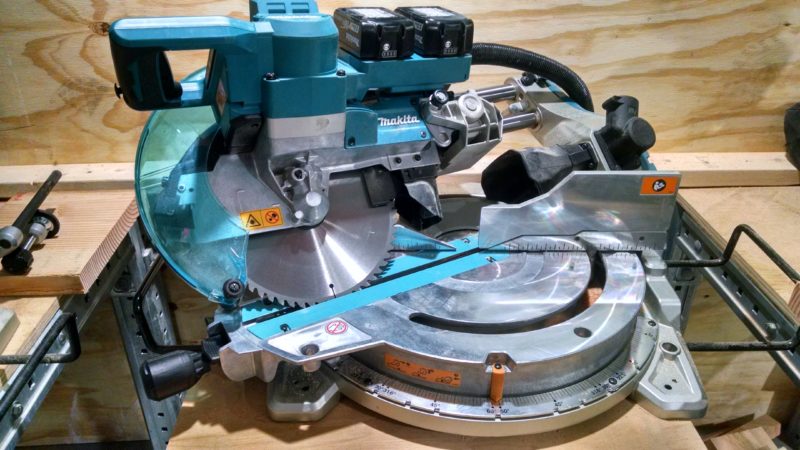 There were plenty of new toys to play with but I would have to say the real star of the show was the cordless 10-inch sliding miter saw. Part of Makita’s X2 line that derives 36-volt power from two 18-volt battery packs, this is the brand’s flagship full-size cordless saw compared to their compact models with 7 1/2-inch blades. The new saw shares features of the latest corded sliding miter saw (also present at the event) such as a notch in the back of the blade guard for cutting tall baseboard vertically and bevel cutting abilities angled to the left or right.

Makita’s new “Darth Drill” line. All of the new subcompact 18-volt tools are being made in a black-on-black color scheme to differentiate them from the similarly-sized 12-volt subcompact tools and slightly larger 18-volt compact tools, which are all in the original teal. Any remaining 18-volt compact tools in the white and black trade dress will be phased out. Contrary to the photo shown, the subcompact tools make the most sense paired with compact battery packs to save bulk and weight, but they will fit any in Makita’s lineup, from 1.5Ah to 6.0Ah. Check out the HomeFixated review on Makita’s first black sub-compact drill and impact drivers. 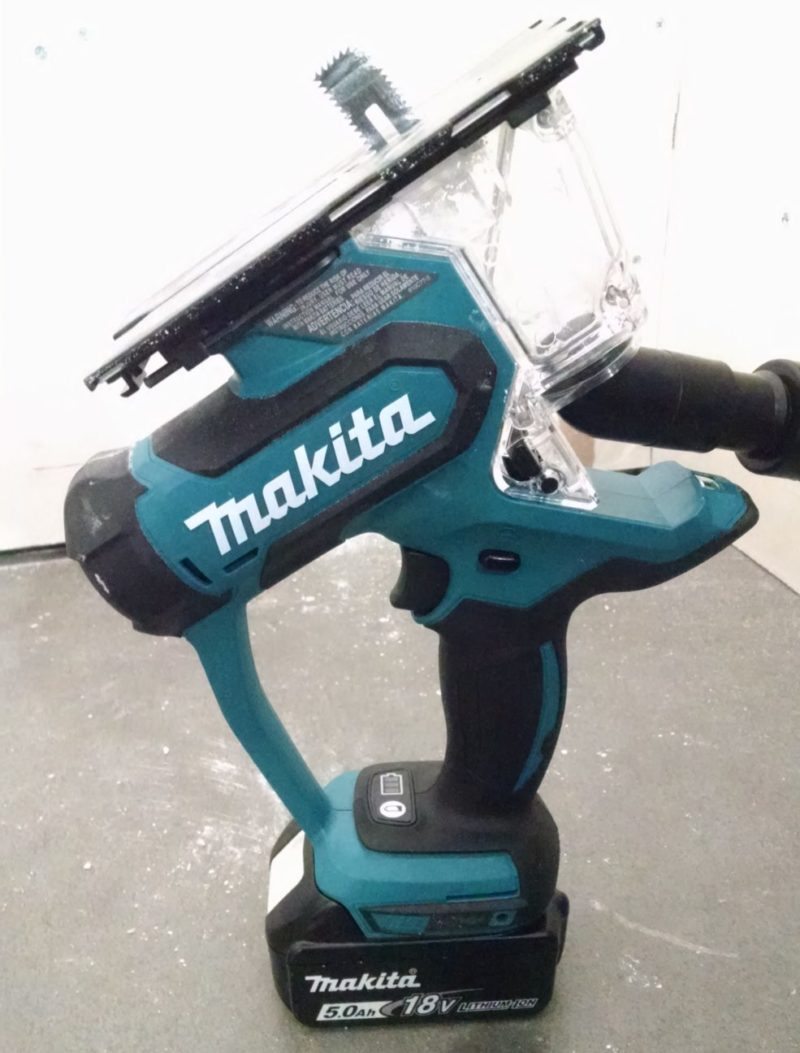 Makita’s unique little drywall saw. The jagged blade moves with an orbital action similar to a jigsaw and will cut straight lines in drywall to a set depth. This way you can cut out a section of drywall without slamming the blade into studs like a recip saw will. 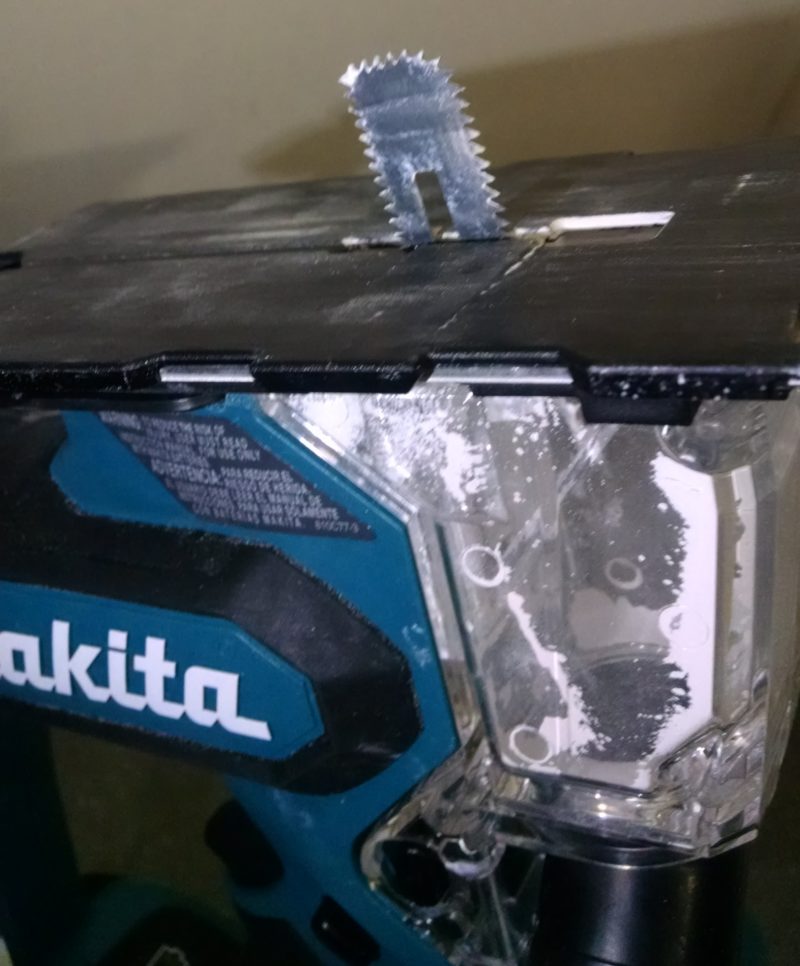 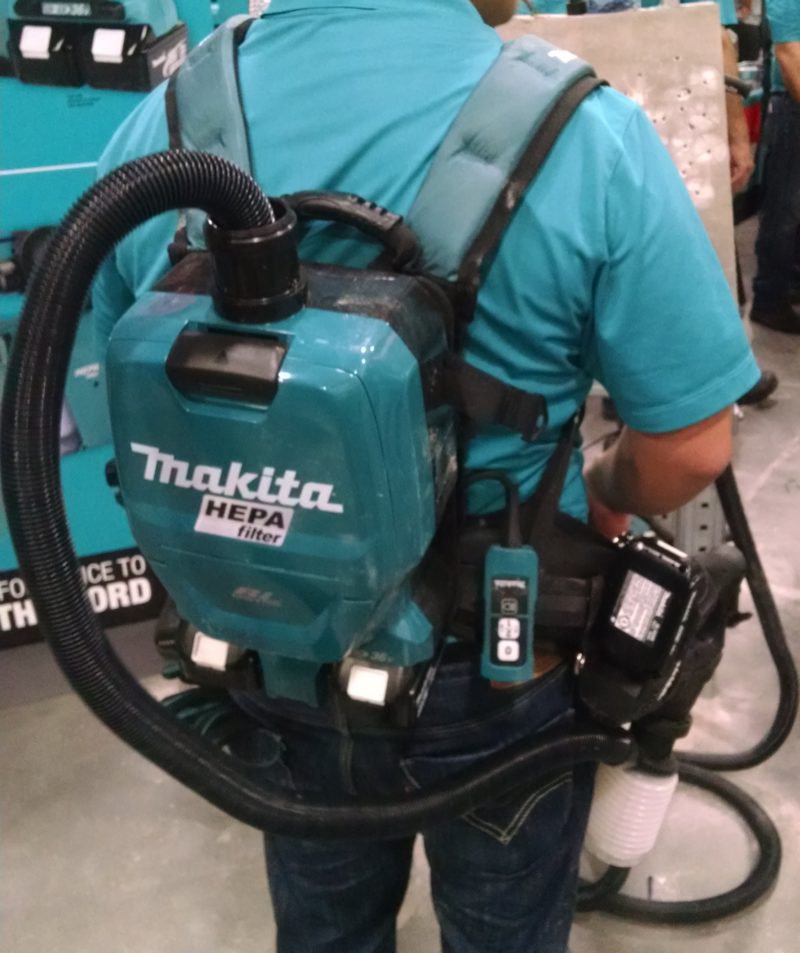 The outfit of the well-equipped Dust Warrior. A cordless backpack vac attached to a cordless rotary hammer for fully mobile dust collecting while boring holes in concrete and masonry. For maximum portability when average size anchor holes are required, Makita has two of their smallest rotary hammers coming out this year–both small enough to hang from your belt. The subcompact XRH01 18-volt model scheduled to launch in the fall is rated as an 11/16-inch hammer, but optimal for 1/4- to 3/8-inch holes. The tool features a de-coupled front end for reduced vibration and a purpose-built dust collection shroud. The 12-volt RH01 will launch this June, and a dust shroud will also be made to fit that model.

There are still corded handheld tools made for the job site. Makita’s beefy 10 1/4-inch blade saw will handle 4-by lumber in a single pass 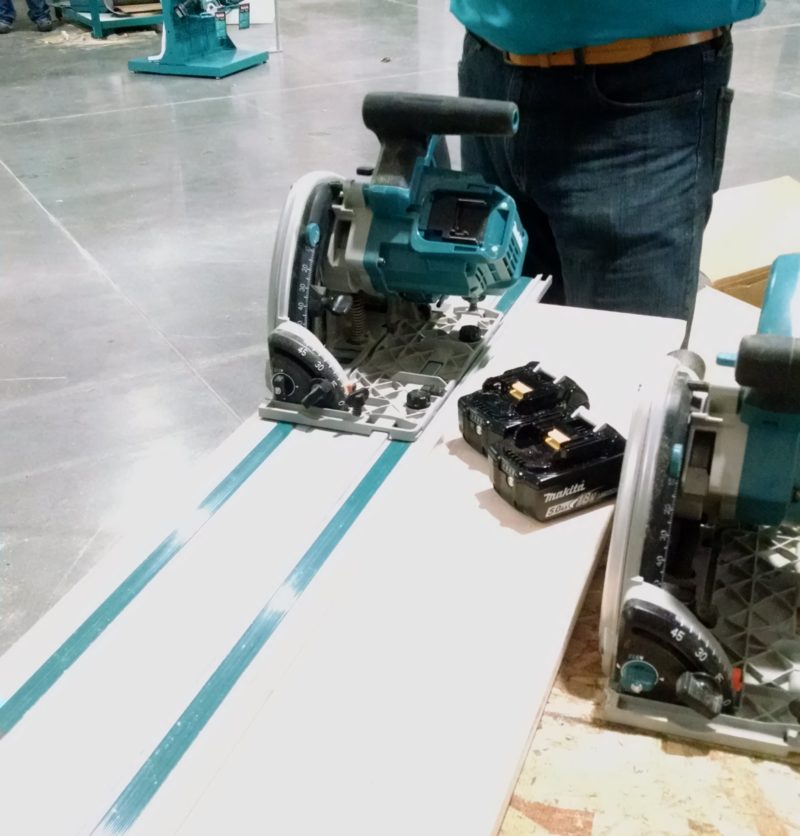 Makita X2 cordless track saw fits the same tracks as the brand’s corded track saw but adds supreme portability to the task of track sawing. You can saw right out of the back of your truck to reduce the extra handling of heavy sheet goods, or heck, even in the aisle of the lumber store if they’ll let you. 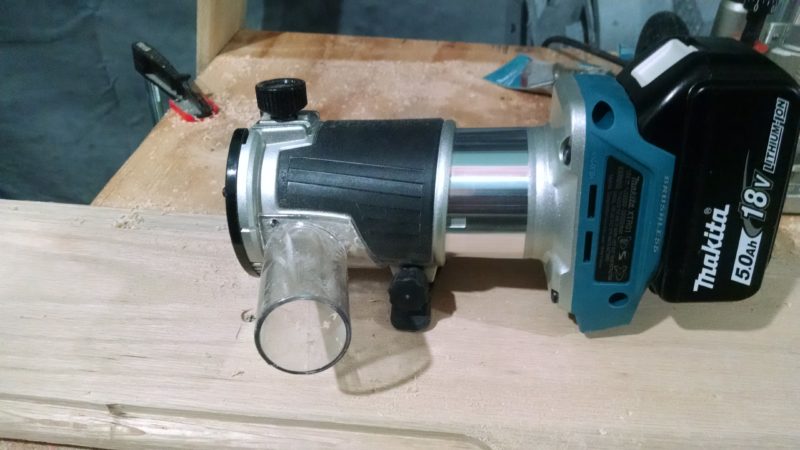 New Makita cordless trim router fits the same bases for their similar size corded router. The smaller the battery on top the better in my experience, because these one-handed routers can get top heavy. 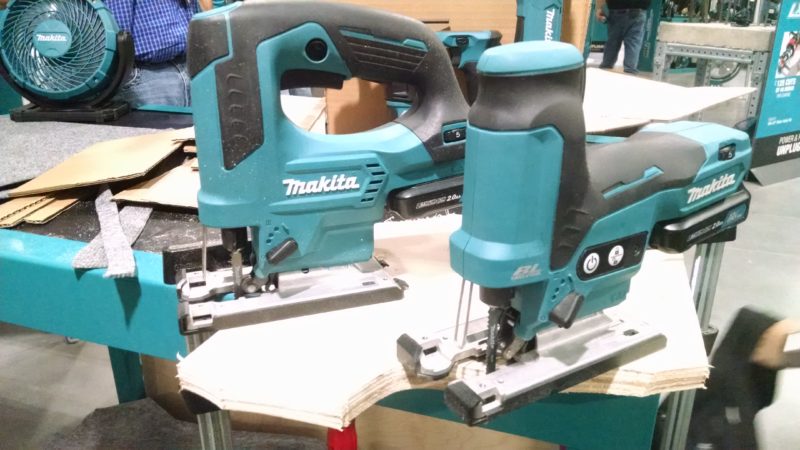 Many, mini Makita jig saws. Not a tongue twister, but a pair of the latest 12-volt sub-compact tools. A top-handle and a barrel grip. 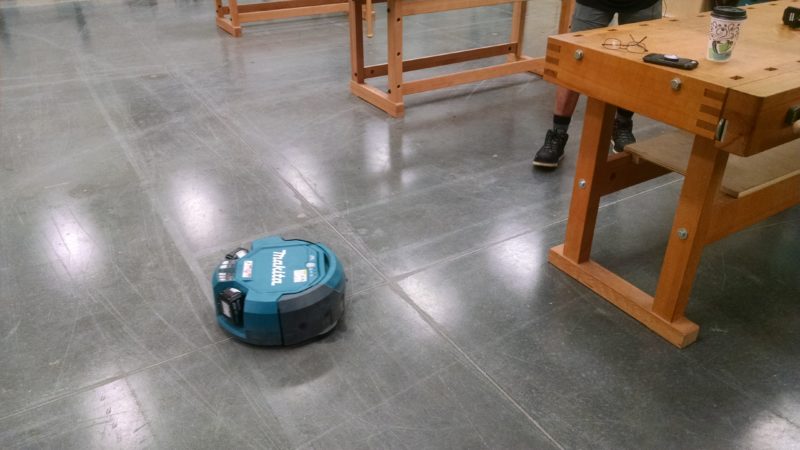 The key to a clean shop floor, if you have room for a robot to roam that is. 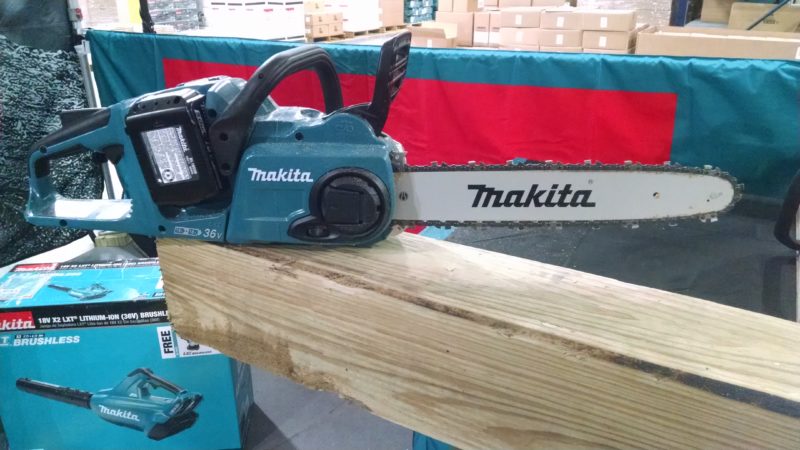 We first saw Makita’s latest X2 chain saw a few months back but this time we saw it racing against several competitors—both gas and battery powered. It held its own and the easy and quiet operation really illustrated the benefits of battery-powered saws over small gas saws.

When you need maximum power or if you spend all day in the woods cutting, a gas saw still offers practical advantages in raw power and runtime. Makita’s largest is the EA7900P with a 79cc engine. The orange-red color scheme will replace the Makita teal color and the entire line of gas saws will be sold under the Makita name in the U.S. market instead of the previous Dolmar name. Makita bought Dolmar years ago and kept the brand name on their larger saws until recently. 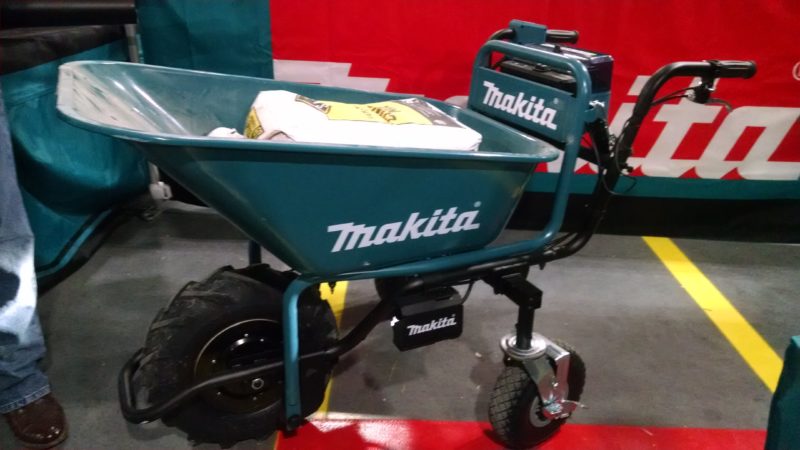 The most unexpected new power tool was the CU180D motorized wheelbarrow/utility cart. The three-wheeled design has swiveling wheels in the rear and a knobby front wheel with a motor and a strong disc brake that looks like it’s off a mountain bike. For comfort, the handlebars can be adjusted up for taller users, and the spread of the back wheels can be stretched out for stability or slid in to fit through a narrow gate. The 18-volt motor has two forward speeds and a reverse setting complete with a back-up beeper. A weatherproof battery compartment houses a spare battery and the machine is equipped with two LED headlights, but there is no powered dump action. In wheelbarrow mode, you have to unlatch the tray and manually lift it to tilt it forward to dump the load. The capacity is listed as 300 pounds, but it’s more realistically limited to how much weight you can lift to tilt the tray up. In cart mode, a flat tubular frame replaces the wheelbarrow tray to hold lumber, logs or whatever else won’t fit in a wheelbarrow.

I know what you’re all wondering, and no, you can’t ride it – I tried. Even with a decent load up front, suspending yourself on the handlebars lifts the front wheel off the ground just enough to make it idiot proof. Dang. 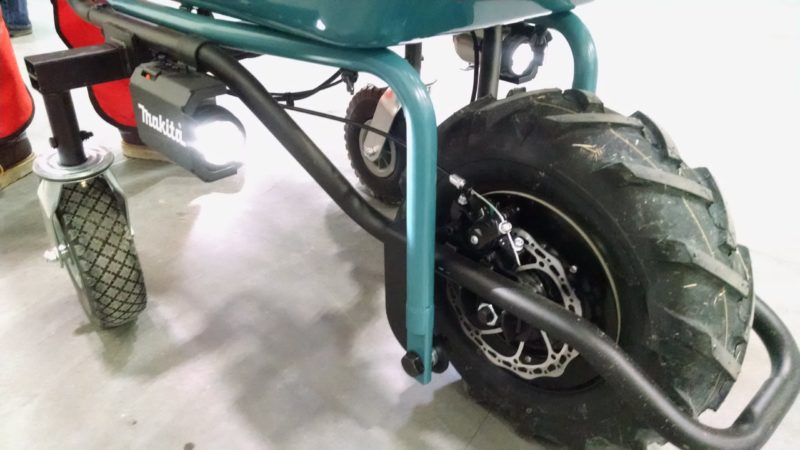