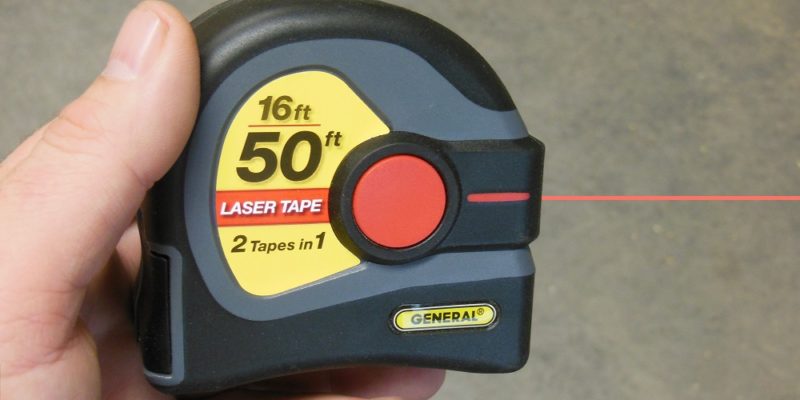 The “rule” of thumb is that everyone should own a tape measure or ten. Whether you’re a tradesman, DIYer or just a Human, you likely find yourself reaching for the old ticked stick every now and then. After all, how else can one verify the $5 sub he just bought is really a foot long? For greater spans you may prefer the convenience of a laser distance measurer. But why choose one or the other when you can be extra fancy and have both?! General Tools just released a 2-in-1 measuring tool combining a 16′ tape and 50′ laser in a single package the size of a standard tape measure. They sent us one to check out so let’s take a quick look at the LTM1 2-In-1 Laser Tape Measure. It shouldn’t take us any longer than, say, 50 feet or so.

The LTM1 2-In-1 Laser Tape Measure by General Tools has proven to be rather handy. The 16′ x 3/4” measuring tape works just like any other; pull it out and take your measurement. The tape is numerically labeled in both inches and 1/8″ fractions and includes tick marks for 16ths and 32nds. The one foot intervals are clearly marked and – for those of you framing walls – the tape has distinct markings every 16”. And depending on how rough you are, it has a fairly solid standout of at least 65”.

Everything’s Better With Lasers – The LTM1 Aims To Please

The real prize, in my opinion, is the built-in 50′ laser distance measurer (accurate to 1/4” in 50′). If you want to know the height of a tall room, for example, just place the 2-In-1 Laser Tape Measure on the floor, aiming upward. Then press the button to instantly determine the distance from floor to ceiling. It really is that easy.

Press the button once to turn on the laser. One more time to take a measurement. Wall to wall measurements are even easier (because you don’t have to squat to the ground). No walking across the room, dangerous ladders or helpers needed. Unless there’s actual work to be done, in which case you’ll want a helper who doesn’t mind climbing dangerous ladders on the other side of the room.

When feasible, the laser is the way to go. No more of the pesky guesswork that comes with having to double the tape back on itself and not knowing where the wall should fall along the radius. No more sagging tapes insidiously lengthening your measurements. And no more compensation errors because you forgot to add the length of the tape’s housing.

You Are Not Being Charged With Battery

It’s nice when a product that requires batteries actually comes with batteries. Even better is when they’re good quality batteries. They even threw in a small Phillips screwdriver to open the battery compartment! General Tools’ 2-In-1 Laser Tape Measure is off to a good start before we even open the package.

You know how annoying it can be to have to tape on a battery cover because that springy plastic tab breaks off, right? We’ve all had TV remotes like that. Well, this one is held on with a hinge pin and a screw. So rest assured that’s not going to be a problem here.

The battery cover screw has a retaining washer to prevent loss. But the auto shut-off feature gives an expected battery life of greater than 3,000 measurements, so you won’t be messing with the screw very often anyway.

While in the battery compartment, I appreciated that it’s clearly marked – redundantly, on the plastic and the metal contacts – so there’s no confusion over which orientation to install the included AAA cells.

I don’t know if it was General’s reasoning or not, but I noticed that the textured surface of the tape produces a little less glare over a wider viewing angle compared to the smooth, glossy finish of most measuring tapes. 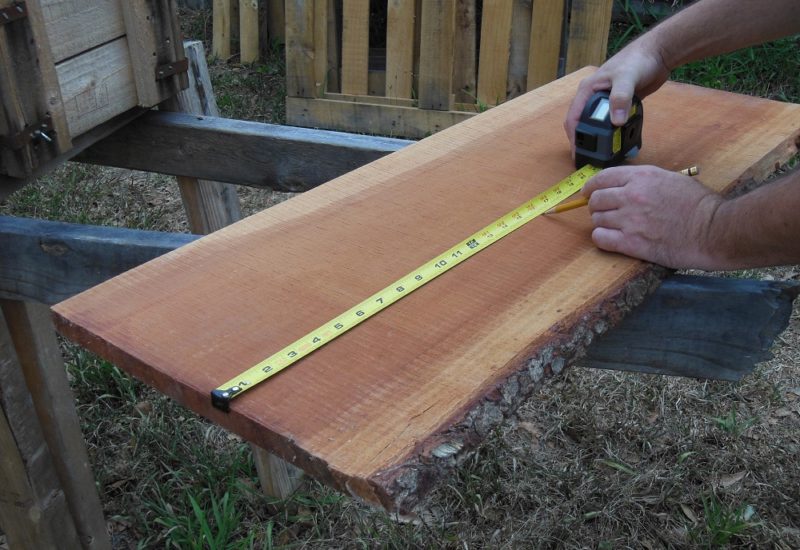 As you’d expect, the metal hook slides back and forth for accurate inside and outside measurements. It would be nice, however, if it extended a little past the bottom of the enclosure so that it could more easily be hooked onto objects for one handed operation. If you use a nail or screw to catch the hook, it’s no problem. Otherwise, you have to expose the hook by first extending the tape a bit with your other hand.

I like that the tape stays extended until you’re ready to reel it in. A push button on the bottom gives you control while retracting, keeping it from whipping around violently and smacking you in the face. If you’re like me, you’d probably like to avoid that sort of thrashing.

How Does The LTM1 2-In-1 Laser Tape Measure Up?

I compared the LTM1 to the only other tape measures I could put my hands on at the moment (they happen to be 1” wide, the LTM1 is 3/4”) and it proved to be dead on along its entire length.

The laser distance measurer has an accuracy of +/- ¼ inch over 50 feet. An LCD screen displays distance in feet, inches and fractions. However, the display is not backlit and the small fractions digits may be hard for some people to read.

General Tools’ 2-In-1 Laser Tape Measure will come in handy on countless jobs. We all need a good measuring tool and you’ll be glad to have this one in your arsenal!