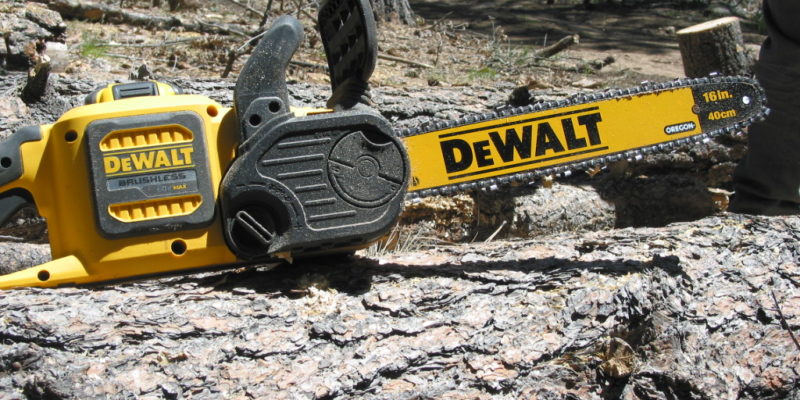 Free at last! We were recently sent the DeWalt 60v Chainsaw from their Brushless FlexVolt line to review. I thought it might be nice for cleaning up the yard, small pruning jobs and dismembering scarecrows. I was right about all that. There were some real surprises for me with this saw though. I’ll share them for you in this review. Check out the latest in our series of DeWalt FlexVolt tool reviews.

Per DeWalt, the DCCS670X1 60v MAX Brushless Chainsaw with 3.0AH battery features a low kick-back 16″ Oregon bar and chain for construction and outdoor cutting applications. Because it’s cordless (and particularly, gas-less), this is a chainsaw you could actually use indoors for construction applications like trimming 6×6’s, beams, etc. The saw offers a chain brake for added kick back protection (more on that below). A tool-free chain tensioning and bar tightening knob allows for proper bar clamping force without having to mess around with a tool. It also features auto-oiling for continuous lubrication, saving you from manually pumping oil. The reservoir sports a quarter-turn oil cap for quick oil re-fills. DeWalt claims up to 70 cuts per charge on 6″ x 6″ pressure treated pine.

What the DeWalt 60v Brushless FlexVolt Chainsaw Can Do

Bring a big fat smile to my face. That’s what. As I mentioned I see this primarily as a pruning, limbing, and backup tool for firewood logging. (No scarecrows were harmed in the course of this review.) First off, I did extensive pruning on some elm, cherry and willow trees in the yard as part of this year’s Spring cleanup session. On the construction site it could easily handle trimming 4×4’s, 6×6’s and beyond.

The big surprise for me came the day I took it out for firewood logging. I brought the saw, a sharpening file, some bar and chain oil, and some batteries. No gas/oil mix, ear protection, iron lung or liability attorneys. Oh yes, the batteries; I brought the 9.0 amp hour that comes with it (actually 3 amp hours at 60 volts but who’s counting) and two 6.0 amp hour batteries (same caveat).

My goal was to fill the back of my Toyota Tacoma with 16-inch long chunks of Ponderosa Pine for the woodstove at home. Personally, I had nagging doubts I could fill the bed with the three batteries, but I didn’t want to bring a gasoline-powered saw as I didn’t want to shatter the silence of the forest that day. Or because I was being lazy.

Guess what? I filled the bed with the 9.0 Ah and about half of one 6.0 Ah battery. I never had to install the third battery. Granted, Ponderosa isn’t Black Walnut in terms of density. But it’s what we have here in the high desert southwest, and it’s what we mostly burn.

So for me, the big surprise is that I can actually go logging with this saw. And, unless I’m pulling a trailer for added capacity, I don’t have to smell like a petroleum refinery when I’m finished.

OK, a few minor quibbles. I did not like the ultra-sensitive chain brake. It seemed like every time I grazed it with my pinky it actuated the brake. I’m not crazy about the trigger lock either, though I found I got used to it pretty quickly. I used bar and chain oil for the chain lubricant and even with a high viscosity lubricant I felt the chain was getting more lube than it needed. That meant using more lube than I was used to. I do like the fact the lubricant reservoir has a window so you can check the level without opening the fill hole. Not crazy about the low kickback chain. Clearly I hate safety.

No stink, no gas fumes, no mixing oil and gas and low noise. Did I mention no stink?! In my mind, there is a lot to like about this tool. The 16-inch bar means I can use it to cut firewood. The chain moves fast and gets up to speed quicker than a gas-powered tool. The chain doesn’t move when you’re not using it, which simplifies your choice of places to set it down. There is no shoulder-wrenching pulling on a start cord; no flooding the carburetor, no worries about gas going bad, vapor lock, etc. A battery-operated chainsaw is kind of a dream come true. Two-cycle engines have been a necessary evil; up until now anyway.

I will hang on to my Stihl gas-powered chainsaws for felling trees and for cutting oak and other hardwood. But my new favorite saw is most definitely the DeWalt 60v chainsaw. I like the tool-free chain adjustment and just about everything about this saw (except for the things I was grumbling about earlier).

Who is the DeWalt 60v Chainsaw For?

Me. Hands off! Also, anyone else who uses a smallish chainsaw for whatever one uses a chainsaw for. Users of corded electric saws would really appreciate the freedom of the battery-powered option. Users of small gasoline-powered chainsaws may wet themselves over the freedom from noise and stink. Possibly. Depends. Trail crews clearing smaller trees would love the option of not having to lug heavy, gas-leaking saws through the forest.

Clearly, if you are a serious logger (flannel wearing) who uses a saw with a 30 inch bar to fell giant trees this isn’t going to work for you (except possibly as a limbing saw). And If you love the deafening noise and stifling stink of a gas-powered saw, you will be disappointed here and ought to look elsewhere. However, for the average homeowner looking to do pruning and/or occasional tree cutting around the property, this could easily fill the bill. It’s also great for around a construction site for trimming beefier materials to length.

I intend to do the bulk of my firewood cutting with this saw from here on out. The low-kickback chain means it will be slower than I’m used to, but it’s all a trade-off: no buying gas and oil for the fuel tank, no waiting for it to cool down to safely add more fuel when the tank is empty, etc. For me I believe the trade-off is more than worth it. The DeWalt 60v Chainsaw kit – DCCS670X1 – includes the DCCS670 Brushless Chainsaw, one 60V MAX 3AH battery, charger, and a hard bar cover (more to protect you and your gear than the tool). The DeWalt 60v Chainsaw sells for around $329.